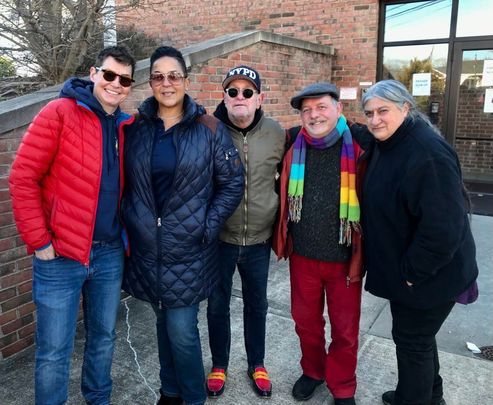 Supporters of LGBT inclusion, including Brendan Fay (second from right), at Holy Family Church on Sunday.

Once again, organizers of the annual St. Patrick’s Day parade on Staten Island have denied LGBT groups the right to march, making it the only parade in the New York metro area to keep such a ban in place.

Staten Island is once again saying no to granting LGBT groups permission to march in its St. Patrick’s Day parade which is scheduled for Sunday, March 6 in West Brighton.

On Sunday, February 20, three LGBT groups went to a parade sign-up session at Holy Family Church in Staten Island – Pride Center of Staten Island, the Gay Officers Action League (GOAL) and FireFlag – only to be rebuffed upon arrival by Larry Cummings, the long-time leader of the parade who for years has been adamant that gay groups have no place in the borough’s St. Patrick’s march.

“I handed (Cummings) the application and he said, ‘I don’t want that,’” Pride Center Executive Director Carol Bullock told Gay City News. “The minute we walked in, I could see his body language. My board member Alex Carr walked over to introduce himself, tried to shake Larry’s hand, and Larry said, ‘I’m not shaking your hand.’

“At one point, I said, ‘I don’t understand.  We are allowed to march in Boston, in Dublin, in New York City — why not Staten Island? What makes Staten Island so different?’ He just stared at me.”

The parade application indicated that the denial was a foregone conclusion.

“The Parade Committee will allow affiliation that honors and supports Irish cultural, religious and historical traditions; and does not stand, in any way, in opposition to, or contradicts, the Teachings and Tenets of the Catholic Church,” it states.

“The Parade Committee will NOT allow affiliation by an organization which has intent, by word, display, or deed, to disparage, embarrass or ridicule Irish culture, traditions or the Roman Catholic religion. This includes, but is not limited to, the use of any banners, signs, clothing/costumes/accessories, actions, and/or language.”

In bold type the application adds, “THIS PARADE IS NOT TO BE USED FOR AND WILL NOT ALLOW POLITICAL OR SEXUAL IDENTIFICATION AGENDAS TO BE PROMOTED. THIS PARADE IS FOR THE CELEBRATION OF ST. PATRICK AND OF IRISH HERITAGE.”

Brendan Fay, the long-time gay rights activist who led the charge for LGBT inclusion in the New York City St. Patrick’s Day parade, and founder of the St. Pat’s for All march in Sunnyside, Queens, was at Holy Family Church on Sunday to offer support for the three groups hoping to submit applications.  He was dismayed by what he saw.

“Larry Cummings constantly referred to the Catholic religion tenets as the grounds for the exclusion. I urged the parade organizers to end the exclusion and extend a warm welcome to the good people of the Staten Island Pride Center,” Fay said.

“I looked at Mr. Cummings who sat rigidly with arms folded. I mentioned Pope Francis’ recent message to parents to love their LGBT children. I mentioned his support for civil unions. I spoke of Lavender and Green Alliance marching on the Avenue on March 17 with the support of Cardinal Timothy Dolan.”

The Staten Island St. Patrick’s Day parade is one of the biggest in New York and routinely attracts a who’s who of political leaders, though its stance against allowing LGBT contingents has caused some pols to give the parade a pass in recent years.  Though Mayor Michael Bloomberg marched during his three terms, his successor Bill de Blasio never took part in the parade, nor will current Mayor Eric Adams march this year.

Last year’s march was canceled because of Covid, but in 2020 the parade caused further controversy after banning the winner of the Miss Staten Island pageant, Madison L’Insalata, from taking part because she announced she was bisexual and wanted to participate while wearing a rainbow scarf. The Staten Island Advance reported at the time that Cummings then barred all pageant winners from taking part.

The current Republican minority leader of the New York City Council, Joseph Borelli from Staten Island, was also kicked out of the 2020 march for wearing a pride flag on his lapel in support of the Pride Center.  He has no plans to march this year, Bullock told Gay City News after her group was rejected by Cummings for the fourth time.