A timeline of events in the recent history of the world’s oldest and largest St. Patrick’s Day Parade. 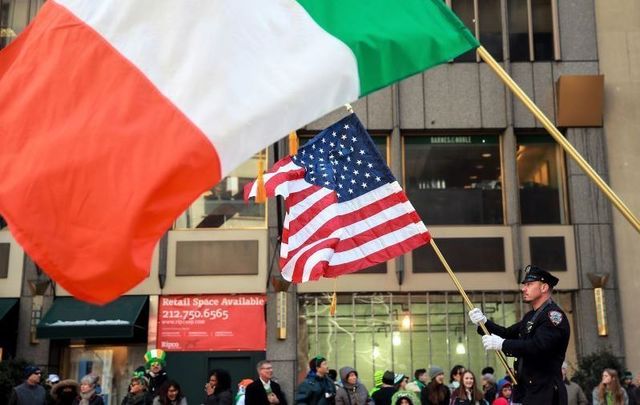 The New York City St. Patrick’s Day Parade, the oldest and the largest celebration of Irish heritage in the world, has also, over the last few decades, become the most controversial.

Throughout the course of its nearly 260-year history, the parade has been no stranger to controversy. Previous points of tension included the selection of Noraid head Mike Flannery as Grand Marshal in 1983, which led the Irish government to withdraw its support that year, and Dorothy Hayden Cudahy’s four-year campaign to become the parade’s first female grand marshal, which she finally did in 1989.

But the most enduring conflict has been between the parade’s organizing committee and members of New York City’s LGBT Irish community, who since 1991 have sought to march in the parade under their own banner.

The furor came to a peak last year when the newly-elected Mayor Bill de Blasio decided to boycott the parade – the first mayor to do so since David Dinkins – and Guinness, a main sponsor, withdrew its support once it was evident no compromise would be reached in time for the 2014 parade.

In 2015, IrishCentral broke the news that the  parade would include an LGBT group from NBCUniversal, the parade’s official broadcaster.

The following is a timeline of key moments:

1990: One hundred and thirty-five members of New York’s Irish Gay and Lesbian Organization (IGLO) ask to march in the upcoming 1991 St. Patrick’s Day parade. The Ancient Order of Hibernians (AOH), which at that point still ran the NYC parade, denied their request, saying they were already fielding applications from 39 other organizations, in addition to facing pressure from the city to scale back the parade’s size and duration.

1991: Mayor David N. Dinkins negotiates with the AOH. Following uproar from the city’s LGBT community over the IGLO’s exclusion, Mayor Dinkins’ office entered conversations with the AOH. Offers on the table up to one week before St. Patrick’s Day included extending the parade to allow all 40 of the organizations with pending applications to march, an offer the AOH declined, citing the parade’s strict rules that only signs identifying a marching group’s county, city or fraternal association, or signs that read “England Get Out of Ireland” are allowed.

A compromise is reached two days before the parade. Division 7, the mid-town Manhattan chapter of the NY-AOH, agreed to let the 135 IGLO members march with their contingent. The deciding factor was Mayor Dinkins’ offer to accompany them himself, forgoing the position traditionally reserved for the mayor at the head of the procession. In addition, a group of wheelchair-bound children who had been excluded from the parade were invited to join a marching contingent of the New York State Police, accompanied by Governor Mario Cuomo.

Mayor Dinkins and the IGLO marchers are booed and doused with beer. In an experience the mayor likened to “marching in Birmingham, Alabama” during the Civil Rights movement, he and the IGLO contingent that joined AOH Division 7 were booed and jeered as the parade traveled up Fifth Avenue. Two beer cans were thrown into the parade, narrowly missing the mayor. “I knew there would be deep emotions, but I did not anticipate the cowards in the crowd,” he told the New York Times. “Every time I heard a boo, it strengthened my resolve – it convinced me that this was the right thing to do,” Dinkins said in a TV interview the same day.

1992: The AOH bans IGLO from marching in the 1992 parade. Citing “outrageous behavior and conduct” from IGLO in the 1991 parade, the AOH refused to allow IGLO to march the following year. This was despite a move by Mayor Dinkins to ensure IGLO’s spot in the parade by placing the New York State chapter of the AOH in charge, ousting the Manhattan chapter. Members of IGLO denied the charges of lewd behavior, saying, “The outrageous behavior was on the part of those spectators who chose to harass our contingent with abusive jeers of 'AIDS! AIDS! AIDS!' and anti-gay epithets."

Mayor Dinkins boycotts the 1992 parade. His boycott marked the first time a New York mayor had skipped the parade since 1923.

1993: New York City awards parade permit to a newly formed St. Patrick’s Day Parade Committee, comprised of more liberal Irish American New Yorkers and supporters of Mayor Dinkins. The move was a blow to the AOH, which had run the New York parade for 150 years.

The AOH, United Irish County Associations, Emerald Societies, and various Catholic organizations threaten to boycott the parade in response, awakening fears that the parade would be canceled entirely.

Federal Judge rules the AOH can ban LBGT marchers. Slightly less than a month before the 1993 parade, Judge Kevin Thomas Duffy of Federal District Court in Manhattan ruled that the NYC Human Rights Commission’s mandate was “patently unconstitutional” and in violation of the AOH’s free speech rights.

The parade goes ahead, without an LGBT contingent.

Quietly, the AOH transfers control of the parade to an independent committee chaired by John T. Dunleavy, a former NYC transit dispatcher from Co. Westmeath. Dunleavy, now 75, has been chairman of the parade committee for the past 19 years.

1995: US Supreme Court rules on Hurley v. Irish American Gay, Lesbian, and Bisexual Group of Boston. On June 19, the Supreme Court decided unanimously that private citizens and organizations holding a public event have the constitutional right to exclude participants whose messages they disagree with. The ruling overturned a 1994 decision by Massachusetts’ Supreme Judicial Court, which had held that the Boston St. Patrick’s Day Parade, beset for years a by conflict similar to the one in New York, could not discriminate based on sexual orientation.

The Supreme Court’s decision meant that the parade committees in Boston and New York were legally entitled to ban LGBT groups from marching under as their own contingents. Despite this, Irish LGBT groups including IGLO and Lavender Green continue to hold annual protests.

2000: St. Pat’s For All, a new St. Patrick’s Day Parade billed as an all-inclusive alternative to the Fifth Avenue parade, is held for the first time in Queens. Its theme, "cherishing all the children of the nation equally," is taken from the 1916 Easter Proclamation of the Irish Republic. Marching in both parades becomes a way for city and state officials to appeal to both groups.

2006: Christine Quinn, newly elected as Speaker of the New York City Council, announces she will boycott the parade after failing to reach a compromise with the committee that would allow her to represent both her Irish American and gay pride. Quinn’s request to wear a pride pin or sash while marching was denied.

In the surrounding media furor, John Dunleavy sparks outrage with comments comparing LGBT activists to neo-Nazis and the KKK. "If an Israeli group wants to march in New York, do you allow neo-Nazis into their parade? If African-Americans are marching in Harlem, do they have to let the Ku Klux Klan into their parade?" he asked in an interview with the Irish Times.

2010: President Mary McAleese declines the parade committee’s invitation to serve as Grand Marshal. The committee’s hopes to see the then president of Ireland lead the parade’s landmark 250th anniversary were dashed, and the ban on gay groups was widely believed to be the reason. McAleee, a devout Catholic, also supported Irish LGBT causes.

2014: Mayor Bill de Blasio announces he will boycott the 2014 St. Patrick’s Day parade. “I simply disagree with the organizers of that parade in their exclusion of some individuals in this city,” said de Blasio in February, just over one month after taking office. He was the first mayor since Dinkins to do so.

Instead, de Blasio, joined by members of the City Council also boycotting the Fifth Avenue parade, marched with the St. Pat’s for All celebration.

In Boston, Mayor Marty Walsh, a proud Irish American, decides to skip the South Boston St. Patrick’s Day parade. “If the gay community is not allowed to march, I’m not marching in the parade,” he said.

Irish Prime Minister Enda Kenny defends his decision to attend the New York parade, saying it’s about “our Irishness and not about our sexuality.”

Guinness withdraws sponsorship from the NY St. Patrick’s Day Parade. One day before St. Patrick’s Day, and on the heels of similar announcements from Heineken and from Sam Adams regarding the Boston parade, the iconic Irish brewing company announced that it would withdraw its support and participation.“Guinness has a strong history of supporting diversity and being an advocate for equality for all. We were hopeful that the policy of exclusion would be reversed for this year’s parade. As this has not come to pass, Guinness has withdrawn its participation. We will continue to work with community leaders to ensure that future parades have an inclusionary policy,” a statement read.

The parade went ahead the following day, with the historic addition of marchers from the Police Service of Northern Ireland (PSNI). LGBT activists protested along the parade route, with one group, Irish Queers, threatening a new lawsuit. Viewership of the parade’s live broadcast on NBC dropped sharply, with only 213,200 tuning in.

2015: A groundbreaking shift took place, with the news that an LGBT group from NBCUniversal would be marching in the 2015 parade.