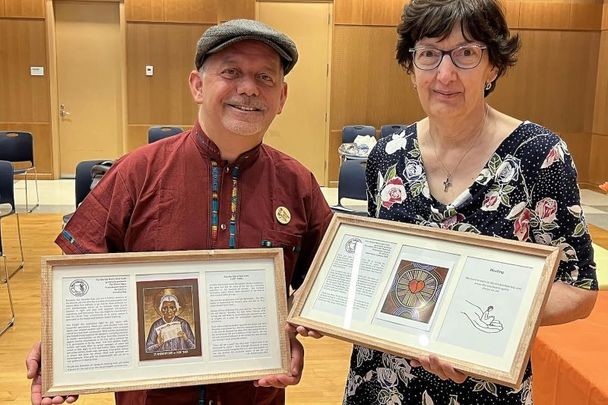 Fay was honored for his life of activism for nuclear disarmament and human rights. For four years, Brendan Fay was a leading organizer with NYCAN (New York Campaign Against Nuclear Weapons) of the successful campaign for nuclear disarmament and divestment in New York City. The legislative initiative in the City Council was sponsored by then Council Member Danny Dromm with then-Speaker Corey Johnson.

Fay noted the influence of the Sisters of Mercy in Athy. In the early 1980s, he was active in his hometown of Drogheda, Co Louth with Pax Christi, Ireland, and with Irish CND (Campaign for Nuclear Disarmament).

“Faith was not simply expressed in prayer and Mass attendance but in a passion for justice and activism for human rights and a world without nuclear weapons,” he said.

Fay thanked Pax Christi for its dedicated witness for non-violence and for a world without nuclear weapons.

“As we witness increasing mass gun shootings and the threat of nuclear weapons the message of Pax Christi is urgent for our city and world,” he said.

Fay, who met his spouse Tom Moulton at a Dignity New York evening Mass, said his Catholic faith was important in awakening in him a sense of human responsibility to make a difference in the world. His earliest protests against apartheid in South Africa and activism for human rights in El Salvador and Northern Ireland was with Catholic communities.

Fay said he was proud of the leadership of the Irish government at the United Nations in the process leading to the passing of the Treaty on the Prohibition of Nuclear Weapons.

Pax Christi leader Rosemarie Pace read the citation for Fay which said in part, “Brendan, like Dorothy day you are a faithful member of the church yet one who has traveled alternative parts that others find difficult to go. You've been arrested for civil disobedience; stood up to bishops when you’ve were deemed it right and just.

“You fought the nonviolent fight for gay rights with respectful persistence. When you were blocked from one space you created another and ultimately were accepted where you had been unwelcome. Your gifts are immeasurable and you are so generous in sharing them.”

Fay is currently translating his film "Remembering Mychal", about Father Mychal Judge, the first victim of 9/11, into Polish and Spanish for upcoming screenings in Warsaw and Mexico.