"No doubt" that Biden will visit Ireland in 2023, US Ambassador says

President Joe Biden will, finally, be making a visit to Ireland in 2023, according to US Ambassador to Ireland Claire Cronin. 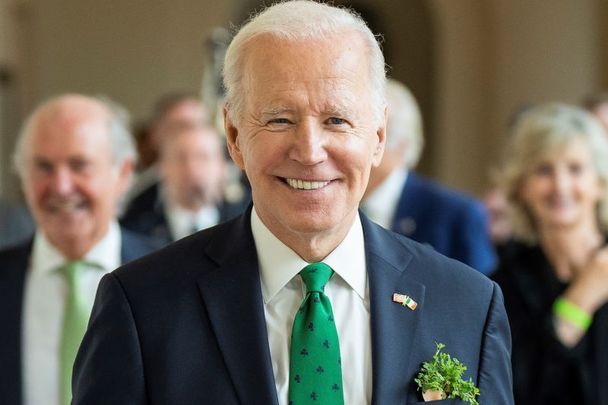 US Ambassador to Ireland Claire Cronin says that US President Joe Biden will be making a visit to Ireland in 2023.

“I have no doubt that President Biden will be coming to Ireland at some point in 2023,” Ambassador Cronin told Newstalk's Henry McKean on December 14.

“I don’t know when, but he has expressed a strong desire to do so, but I have no clue when that might be.”

When President Biden, who regularly touts his Irish roots, was elected in 2020, it was rumored that his first trip abroad would be to Ireland.

Biden reportedly told his Irish cousin Laurita Blewitt while still on the campaign trail in 2020: “My priority as President will be to come to Ireland."

Later, in January 2021, Taoiseach Micheál Martin remarked: “When I invited President Biden to Ireland, he just said, 'try and keep me out.' So it won’t be any lack of enthusiasm on his side."

Though there were reports earlier this year that a State Visit might take place over the summer, Biden's presidential visit to Ireland has yet to materialize.

2023 will mark the 25th anniversary of the signing of the Good Friday Agreement, which Biden frequently champions, especially in light of Brexit. A trip to coincide with the Agreement’s anniversary in April could be possible.

Should Biden make an Irish visit in 2023, it will hardly be his first trip to Ireland. He last visited Ireland in an official capacity in 2016 when he was Vice President during the Obama administration for a trip that included stops in Dublin, Mayo, and Louth.

Later, in September 2017, Biden was on hand in Co Mayo to preside over the official sod-turning ceremony of a new €10 million 14-bed Mayo/Roscommon Hospice unit.

Elsewhere in her interview with Newstalk, Cronin, a native of Massachusetts who was sworn in in January, spoke about how she became Ambassador. Her nomination was first reported here on IrishCentral.

“I was very, very involved and got to really come to know President Biden during his presidential campaign,” Cronin said.

“After the election was over, someone reached out and asked if I would submit a resume. I was never really seeking or lobbying for any position, but it came to me.

“One day I did get that nice call from President Biden asking if I would agree to be vetted for the position which I happily said yes to.

“Much as I loved my previous job [Majority Leader of the Massachusetts House of Representatives], the opportunity to be able to serve my country was important to me, I’d never had that opportunity.

“Also, I have the utmost respect and admiration for President Biden, so to be his representative in Ireland in of itself means a lot to me.”

Cronin’s interview with Newstalk was part of the ‘Open Door’ policy she instituted in hopes of making the US Embassy in Dublin “more accessible.” The interview featured students from St. Dominic's College, an all-girls school in Ballyfermot, Dublin, who met with Cronin and toured Deerfield Residence, the home of the US Ambassador in Dublin’s Phoenix Park.

Cronin, who has already visited the 26 counties in Ireland as well as Belfast, said her family will be coming to Ireland for Christmas.