Micheál Martin discussed US-Ireland relations ahead of Joe Biden's inauguration during a webinar presented by the Institute of International and European Affairs. 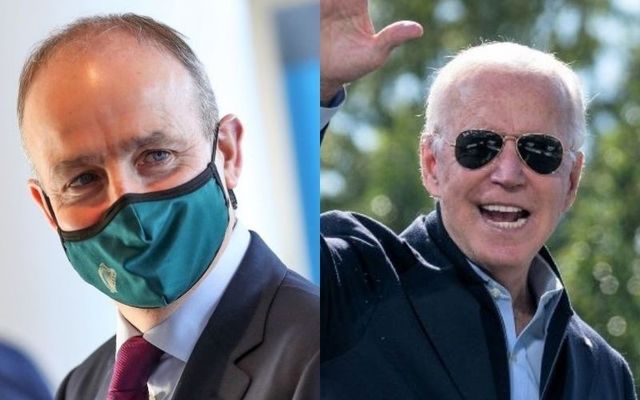 Taoiseach Micheál Martin said that it is evident that President-elect Joe Biden is "passionate about his Irish heritage." RollingNews.ie / Getty Images

Taoiseach Micheál Martin discussed US-Ireland relations ahead of Biden's inauguration during a webinar presented today, January 15, by the Dublin-based Institute of International and European Affairs.

The Taoiseach was asked during the webinar hosted by the Dublin-based IIEA whether or not he feels “confident” that he’ll be in Washington, DC for St. Patrick’s Day.

The Taoiseach replied: “I think obviously the course of the virus will dictate a lot of that.

“When I invited President Biden to Ireland, he just said, 'try and keep me out.' So it won’t be any lack of enthusiasm on his side.

The modern tradition of the Taoiseach visiting Washington, DC around St. Patrick's Day to present a bowl of shamrocks to the US President had humble beginnings when, in1952, Ireland's Ambassador to the US John Hearne sent a small box of shamrocks to President Harry Truman.

In March 2020, coronavirus cut into then-Taoiseach Leo Varadkar's visit to Washington, DC. The traditional shamrock presentation scheduled for March 12 was canceled, and Varadkar, who was already in Washington, DC, instead hosted a press briefing in which he indicated that shutdown measures were to begin back home in Ireland.

During his half-hour speech on Friday, Taoiseach Micheál Martin made special mention of Ireland's relationship with the US in light of the upcoming inauguration: “While the reach of our Diaspora is global, I am particularly mindful speaking to you today that the United States of America, the home of perhaps Ireland’s largest Diaspora, will in the coming days, complete the transition from the Trump presidency to that of President Joe Biden and Vice President Kamala Harris.

"The eyes of the world are on this transition, more so than ever after recent events.

"In Ireland, we feel a particular affinity, given that Joe Biden has been a stalwart friend of Ireland throughout his long and decorated history of public service.

"In my conversation with him in the days after his victory, it was clear that he is passionate about both his Irish heritage and the idea of Ireland as a constructive friend at a time of great challenge for his country and the world."

He added: "From a bilateral Irish perspective, we look forward greatly to a Biden presidency. A number of members of the incoming administration are well known to us and we will be starting from a point of mutual friendship and respect."

Later, during the question and answer portion, Martin said he was confident that the Biden administration will help improve relations between the US and Europe, as well as globally.

“I got a sense from my conversation with President-elect Joe Biden that he wanted to rapidly reset that relationship with Europe," The Taoiseach said.

“I do see a more multilateral trust coming from the new administration which, I think, will sit well with the European Union, which is anxious to reset the relationship as well.”

You can watch Taoiseach Micheál Martin's entire webinar for the IIEA here: