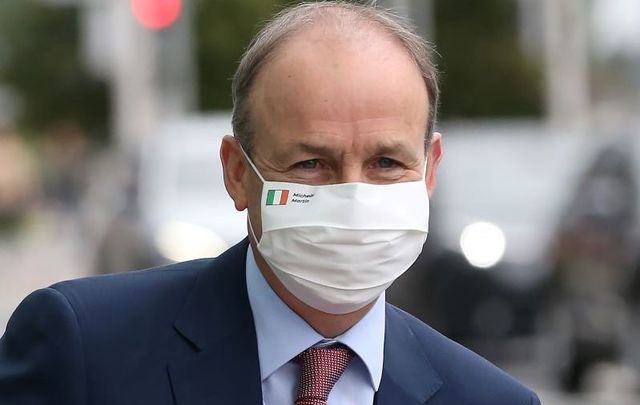 After the phone call on Tuesday, a spokesperson for the Irish government said: “In a warm conversation, President-elect Biden recalled his strong Irish roots and his visit to Ireland with his family in 2016.

“The President-elect reaffirmed his full support for the Good Friday Agreement and they discussed the importance of a Brexit outcome that respects the GFA and ensures no return of a border on the island of Ireland.

“They looked forward to working together bilaterally and across a range of international areas including EU-US relations, the UN – including the Security Council, and on the important global challenges of Covid-19, economic recovery and climate change.”

I’ve had a warm and engaging call with US President Elect @joebiden He brings tremendous knowledge & understanding to his new role, and has a great love for his Irish heritage. He underlined his commitment to the Good Friday Agreement & we spoke of importance of multilateralism..

... for example, the Paris Accord and the WHO. I congratulated him on the historic nature of his election and that of @KamalaHarris and we agreed to work closely together. I also invited him and @DrBiden to come back to Ireland when we will properly mark their success 🇮🇪🇺🇸

The Biden-Harris Presidential Transition team, who said Biden also spoke with Emmanuel Macron, Angela Merkel, and Boris Johnson on Tuesday, separately said in a statement: "The President-elect thanked Taoiseach Martin for his congratulations and highlighted his desire to strengthen the enduring personal, cultural, and economic ties between the United States and Ireland.

"He noted that he looked forward to working with the Taoiseach to address shared challenges such as controlling COVID-19; building a sustainable economic recovery, and tackling climate change.

"He also reaffirmed his support for the Good Friday Agreement and the peace process in Northern Ireland.

On November 7, the day when media outlets in the US called the election in Joe Biden’s favor, Taoiseach Micheál Martin said in a statement: "On behalf of the government and the people of Ireland, I offer warmest congratulations to Joe Biden on his election as the 46th President of the United States.

"Ireland takes pride in Joe Biden’s election, just as we are proud of all the generations of Irish women and Irish men and their ancestors whose toil and genius have enriched the diversity that powers America.

"This is a particularly special day for the people of County Louth and of County Mayo who count President-elect Biden among their own.

"Joe Biden has always been a stalwart friend and supporter of Ireland, including of the prosperity, stability, and opportunity made possible by the Good Friday Agreement, to which he has pledged his ongoing steadfast support.

"I also wish to congratulate Kamala Harris on her election as Vice-President and recognise the tremendous significance of her election to the role.

"I am greatly looking forward to working with the new Administration in the period ahead in progressing international peace and security.

"I also intend to work closely with the new Administration and the United States Congress to pursue comprehensive immigration reform, an issue that is so important to tens of thousands of Irish people making a significant contribution to America."