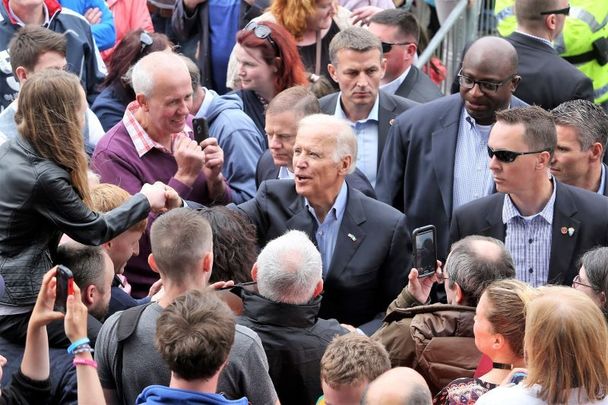 As is true in the case of Presidents John F. Kennedy, Barack Obama, Ronald Reagan, and now Joe Biden, the Irish Famine had the untold impact of creating a US president by sending their forefathers to America.

Biden's folks, who came to America trailing broken dreams and heartache, likely never dreamed that over a century later, their descendant would be elected President of the United States of America.

On May 31, 1849, Owen Finnegan, Biden's great-great-grandfather from the remote Cooney Peninsula in Co Louth, arrived in New York aboard the ship Brothers, fleeing the last of the Famine. As was often the custom, he came before the rest of his family. A shoemaker by trade, he procured employment, and a year later, he sent for his family.

His wife Jane (nee Boyle) immigrated with her and Owen's children (including Biden’s great-grandfather, James) almost a year later on May 15, 1850, on a ship named the Marchioness of Bute, according to genealogist Megan Smolneyak, who has traced the lineage for the Biden family.

Members of the Finnegan family went North to upstate New York picking apples and working with farmers. James Finnegan joined them for a time before heading west, ending up in Scranton, Pennsylvania, home to the Molly Maguires, a "secret society" of Irish immigrant miners who fought for workers' rights against the mine bosses.

The mine bosses sent in the Pinkerton detective agency to break the union. Pinkerton planted a spy, an Irishman called James McParland, in their midst. His testimony was enough to send twenty of the Mollys to the gallows in one of the largest mass hanging by the US government in its history.

Rumored to be a member of the Molly Maguires was Biden's great-grandfather Edward Francis Blewitt, a native of Lousiana whose parents Patrick and Catherine (nee Scanlon) Blewitt were from Ballina, Co Mayo.

Blewitt was a major Irish American figure in Scranton. Not only did he win the election to the state senate, but he was also named Chairman of the Saint Patrick’s Day Parade in 1897 and was the co-founder of the Friendly Sons of St. Patrick in Scranton in 1908.

When campaigning alongside Barack Obama in 2008, Biden said at an event for the United Mine Workers in Virginia: “I hope you won’t hold it against me, but I am a hard-coal miner, anthracite coal, Scranton, Pa.

Of his great-grandfather Blewitt's rumored ties to the Molly Maguires, Biden said:  “He went out of his way to prove that he wasn’t, and we were all praying that he was."

In 1879, Blewitt married Mary Ellen Stanton, a native of Scranton, and together they had four children, including Geraldine Catherine Blewitt, who went on to marry James Finnegan's son Ambrose Finnegan.

Grandpop Ambrose had a huge political influence over young Joey,  the future president of the United States.

After mass on Sundays, the clan would gather and men would breakaway into one room and engage in robust political discussions about the merits of Harry Truman over Adlai Stevenson. There was no talk of Republicans, the class divide was too great. Irish Catholics didn’t dare to think that way.

Grandpop Ambrose gave Joe the benefit of a lifetime of experience dealing with the Democratic Party and instilled in young Joey the virtues of the working man.

No doubt that Ambrose Finnegan would have recognized in Donald Trump the stereotype of the wealthy and uncaring rich businessmen he had excoriated to young Joey.

In fact, he even had a term for how the rich dealt with the lowly Irish in the mines and elsewhere. He called it the “Silk Stocking Screw." He would have had his Irish antenna distinctly up when listening and seeing Trump in action - action that will come to a decisive end in January when Joe Biden is sworn in as the 46th President of the United States of America.

In 2016, Joe Biden told RTE: "My grandfather and grandmother Finnegan, all my mother’s brothers, and my father told us about the courage and commitment it took for our relatives to emigrate from Ireland – in the midst of tragedy to distant shores, where they didn’t know what awaited them. It took great courage."

That courage, as it turns out, paid off.