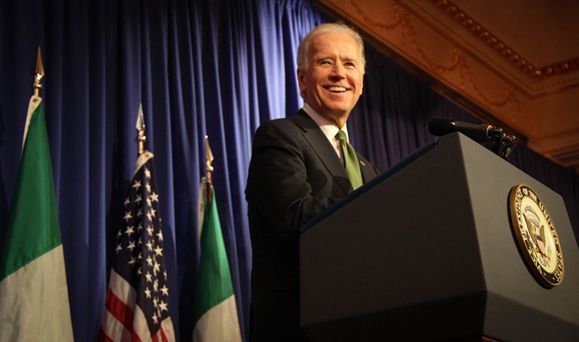 NPR reported that Trumps’ share of the Catholic vote had suffered a “decline in support among white Catholics, compared to 2016, according to National Election Pool and AP/Votecast.”

The letter to Irish America reads: “On behalf of the Irish Americans for Biden Committee and the Biden Campaign, we want to thank the millions of Irish Americans for your critical role in electing Joe Biden as President and Kamala Harris as Vice President. Not only did you make the crucial difference in battleground states like Pennsylvania, Wisconsin, and Michigan, where those of Irish heritage represent over 10 percent of the population, but you volunteered tirelessly in your local districts, making phone calls, putting up signs, and urging friends to vote.

Irish Americans and the Irish at home are really proud and excited that Joe Biden will become the first Irish American Catholic President since JFK was elected 60 years ago. Vast numbers of Irish Americans, young and old, turned out to vote for a candidate who personified the Irish values of decency, hard work, respect, and honesty.

Irish American working people related to a man who was immensely proud of his working-class Irish upbringing in Scranton by an Irish mother named Kitty Finnegan, and who loves to quote the poetry of Nobel Prize-winning Seamus Heaney. As Valerie Biden said at one of our Irish Americans for Biden Rallies, the President-Elect’s Irish values include “faith and fortitude, courage and compassion and passion and principle.”

The Biden Campaign engaged at many levels with the 35 million Irish American community in an inclusive way seldom seen before in Presidential elections, reflecting Joe Biden’s immense pride in being Irish, and his commitment to peace in Ireland and to the betterment of working Irish Americans.

Importantly, President-Elect Biden issued a statement during the campaign reiterating that he will work to advance the Northern Ireland peace process and "ensure that there will be no US-UK trade deal" if Brexit threatens the Good Friday Agreement.

In a letter he wrote before a 2016 trip to Ireland as Vice President, Joe Biden spoke for all Americans when he stated:

“And that is America: This notion that home is where your character is etched. As Americans, we all hail from many homes. Somewhere along the line, someone in our lineage arrived on our shores, filled with hope. We are blessed to experience that simultaneous pride in where we’ve found ourselves, while never forgetting our roots.

Thank you again Irish America for electing Joe Biden, a man who is the essence of decency, a sincere person of faith, who is dedicated to providing good jobs and affordable healthcare and education for Irish Americans and all Americans.