Joe Biden told his Irish cousin Laurita Blewitt, who was working on his campaign earlier this year, that if he becomes President, his "priority" will be to visit Ireland again. 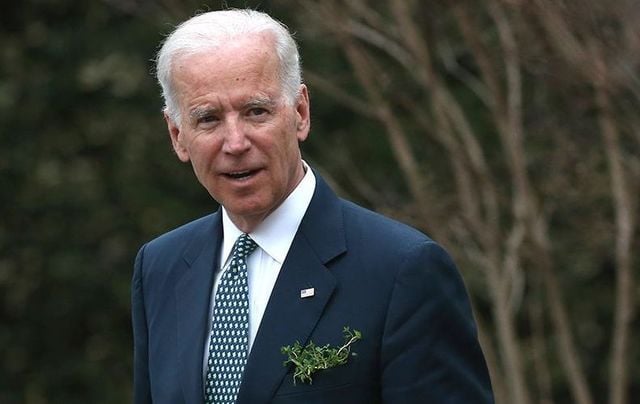 Vice President Joseph Biden waits for the arrival of Taoiseach Enda Kenny of Ireland, at the Naval Observatory, on March 14, 2014, in Washington, DC. Vice President Biden hosted a breakfast for the Irish Prime Minister in honor of St. Patricks Day on Sunday. Getty Images

Joe Biden is keen to head to Ireland if he defeats incumbent US President Donald Trump in November's presidential election.

77-year-old Biden is proud of his strong Irish roots and previously visited the Emerald Isle in 2016 while serving as vice president to Barack Obama.

He could be heading back in a matter of months too, according to an exclusive Irish Mirror interview with his Irish cousin Laurita Blewitt, who has worked on Biden's campaign earlier this year.

“My priority as President will be to come to Ireland," Blewitt says Biden recently told her.

It was amazing to see the hundreds (both inside and outside) who came out tonight to show their love and support for @JoeBiden in Las Vegas #TeamJoe #JoeBiden2020 and I loved being introduced to the crowd. pic.twitter.com/cUC58o69AN

Blewitt spent a couple of weeks on the campaign trail with Biden before the Covid-19 pandemic forced her to head home, though not before Biden made a promise.

“What he told me when I was leaving was, ‘My priority is to get to Ireland,’” she said.

The Democratic candidate is certainly well-positioned to make good on his promise, with Biden comfortably ahead of the under-fire President Trump in the latest opinion polls.

According to Blewitt, a donor relations manager with the Mayo Roscommon Hospice Foundation, Biden “has a great love for Ireland.”

In September 2017, Biden was on hand in Co Mayo to preside over the official sod-turning ceremony of a new €10 million 14-bed Mayo/Roscommon Hospice unit where Blewitt is employed. She had told the Mayo News that Biden pledged his support when she was in Washington, DC for his Medal of Freedom ceremony.

In 2019, she shared this tweet where Biden sent a special message to mark the opening of the facility:

Very proud to have been able to get my cousin @JoeBiden take time out of his hectic schedule this week to record such a special message for @MayoRoscHospice @SimonHarrisTD @patmcgrath https://t.co/t0qWPuz4Fm

“He was reared very much with Irish roots and he’s very much Irish at heart,” she now tells the Mirror.

While she may be far from impartial, she believes Biden could help unite the country by drawing on the experience of the Irish in America.

“He quotes a lot of Irish poets and Irish writers when he speaks," she said, recalling how during one rally  "he spoke about how the Irish were treated when they left Ireland and how he really wants to represent the minority in America."

“He knows how difficult and he knows the challenges they faced because he’s seen how Irish people were treated," Blewitt added.

“So, he’s very much in touch with his Irish roots and his Irish family.”