"We're here to take over," Conor McGregor said on April 1 announcing his and Will Smith's upcoming fight night in Dublin. 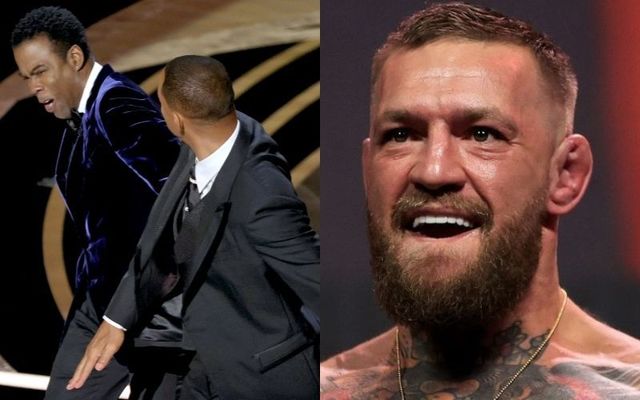 Will Smith is going to learn a lesson or two from Conor McGregor. Getty Images

Conor McGregor is set to train Will Smith in Dublin after a spectacularly bad week for the new Oscar winner.

McGregor, who has also made headlines for public outbursts in the past, is agreeing to step out of the octagon and onto the sidelines to train Smith in the ancient Irish art of UFC with the aim of hosting a sell-out fight night event in Dublin’s Croke Park.

“We come bulletproof in Ireland," McGregor, unimpressed with the open-handed 'slap seen around the world' at last Sunday's Oscars but smitten with the headline-grabbing stunt, reportedly told the Smith. "We're reared tough, and we fight.”

Though Smith has previously trained with McGregor's coach John Kavanagh (no, really), and likely picked up some skills while filming the 2001 flick "Ali," the Oscar winner is understood to be keen to learn some of McGregor's sneak-attack skills.

No competitor has been confirmed yet for Smith, though Daniel O’Donnell and Michael Flatley are rumored to be in the mix. Liam Neeson is set to referee.

It’s unclear when the special Dublin fight night will be held, though it is reportedly being planned for the summer months. There are, of course, concerns that it might conflict with the Rose of Tralee in August, but festival directors are understood to be exploring a new element of the competition that would see the lovely girls feature in the undercard.

Arriving at Dublin Airport earlier today, April 1, Smith explained how his life got flipped turned upside down in recent days.

“I got in one little fight and everyone got scared," Smith lamented.

However, the actor-turned-fighter now says that it’s now time to “celebrate” after signing on for training with McGregor ahead of what is sure to be a sell-out fight night in Dublin.

“I rang my wife Jada and said, ‘Baby, we’ve done it. We’re rich, baby. Conor McGregor made us rich. Break out the red panties.'”

As with any remotely high-profile American’s arrival in Ireland, Smith was warmly welcomed by Irish politicians on April 1. Taoiseach Micheál Martin was on hand to present the new Oscar-winner with a bowl of shamrock on the tarmac at Dublin Airport, while the Healy-Raes were parked outside the airport hosting an impromptu seisiún atop a Jeep.

Elsewhere, a last-minute shuffle means that Ryan Tubridy will host Smith on tonight’s episode of “The Late Late.” Smith is set to perform his hit song "Gettin' Jiggy Wit It" accompanied by a youth Irish trad group from Mullingar.

Ducking into McGregor's Bentley at Dublin Airport, Smith added: “And I’d just like to say from the bottom of my heart, I’d like to take this chance to apologize — to absolutely nobody!”