From a Lord Viscount's home to a cramped unsanitary home for 17 poor families, this museum brings Dublin's history to life 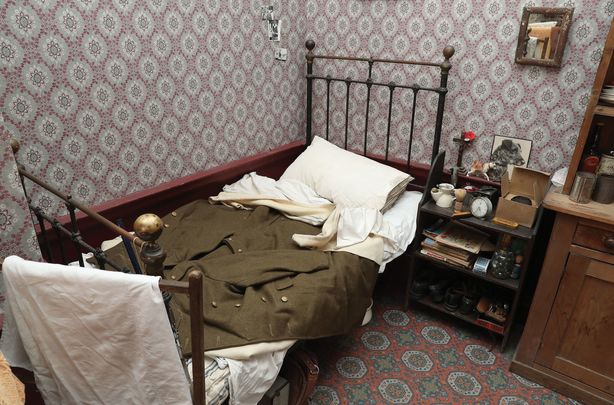 Details of an installation inside 14 Henrietta Street. Marc O'Sullivan / via IOW

Discovers the shifting fortunes of a grand Georgian townhouse, 14 Henrietta Street, now how to Dublin's tenement museum, once split into 19 flats some with just a single room.

The History of 14 Henrietta Street

History comes alive within the walls of 14 Henrietta Street, a Georgian townhouse in the heart of Dublin’s north inner city.

The house was built in the late 1740s by Luke Gardiner and its first occupant was The Right Honorable Richard, Lord Viscount Molesworth, and his second wife Mary Jenney Usher, who gave birth to two daughters there. Esteemed residents continued and over the remainder of the century, it was home to The Right Honorable John Bowes, Lord Chancellor of Ireland, Sir Lucius O’Brien, John Hotham Bishop of Clogher, and Charles 12th Viscount Dillon.

The 1800s saw professionals move into the street and between 1800 and 1850, Number 14 was home to Peter Warren, solicitor, and John Moore, Proctor of the Prerogative Court, before becoming the headquarters of the newly established Encumbered Estates’ Court which allowed the State to acquire and sell on insolvent estates after the Great Famine.

Family life returned to the street in the early 1860s when Dublin became a Garrison town and the Dublin Militia occupied the house until 1876. It was subsequently purchased by Thomas Vance who installed 19 tenement flats of one, three, and four rooms. An Irish Times advert from 1877 described it thus: ‘To be let to respectable families in a large house, Northside, recently papered, painted and filled up with every modern sanitary improvement, gas, and WC on landings, Vartry Water, drying yard and a range with oven for each tenant; a large coach house, or workshop with apartments, to be let at the rear. Apply to the caretaker, 14 Henrietta St.’

In 1906 a classified advert appears in The Irish Times offering a ‘Compact Flat of 3 Rooms for rent at 4 shillings 25 pence.’ By 1911, the house was crammed with 17 families and the census showed it was a hive of industry, with milliners, a dressmaker, French polishers, and bookbinders living and probably working in the house. The last families left the tenement flats in 1979 and the house was left to rot. 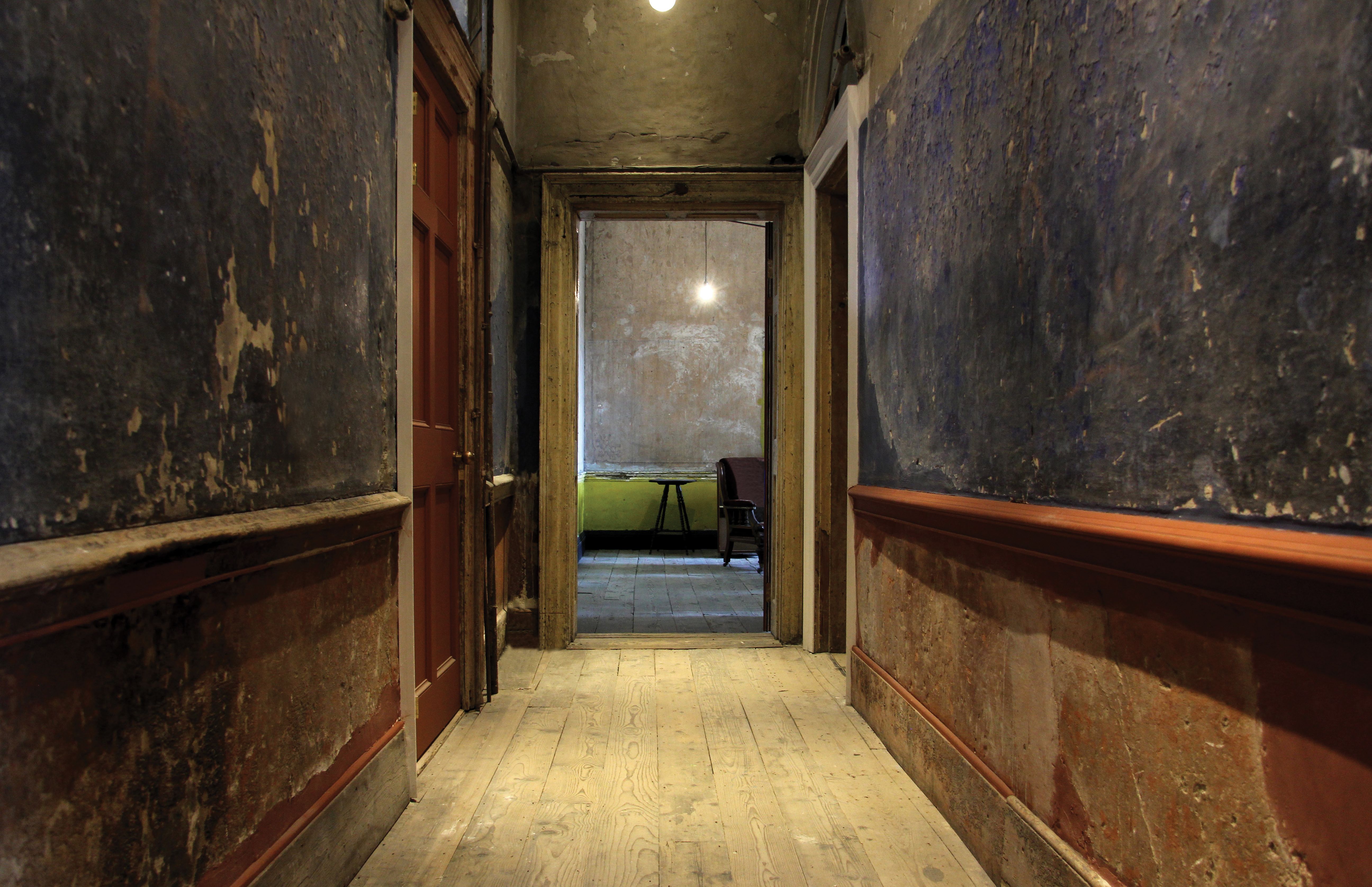 At the turn of the 21st century, Dublin City Council acquired the house. The idea for a museum unpicking the story of tenement life came into being and work began to peel back the layers of time.

Number 14 is built over five floors, with a railed-in basement, brick-vaulted cellars under the street to the front, a garden and mews to the rear, and a coach house and stable yard beyond. In the main house, the principal rooms were on the ground and first floor so that they were ‘more wholesome….being more out of reach of damps’ according to architect Isaac Ware. On these floors, three interconnecting rooms are arranged around the grand two-story entrance hall with its cascading Great Stairs.

Read more: Five amazing things to do in Dublin

On the ground floor were the family rooms which consisted of a street parlor to the front, a back eating parlor, a dressing room or bed chamber for the Lord of the house, and a closet. On the first floor level, the piano noble, or noble floor, were the formal public reception rooms. A drawing-room to the front is where the Lord or Lady would host visitors, along with the dining room to the back. The dressing room or bed chamber for the lady of the house, and a closet were also on this floor. Family bedrooms were located on the floor above, and the servant's quarters were in the attic. A second back stairs provided access to all floor levels for family and servants alike.

These grand rooms began as social spaces to display the material wealth, status, and taste of its inhabitants. Dublin’s Georgian elites developed a taste for expensive ‘pictures, glasses and tapestry’; for fine fabrics, ‘rich damask and silks’, ‘velvets, mohairs and chints’, as well as for the growing fashion for furniture made from exotic materials, such as ‘walnut tree’ and mahogany.

In the 19th century, these opulent rooms took on a more utilitarian tone: Fine decoration and furniture gave way to desks, quills, and paperwork with the activities of barristers, lawyers, and clerks who moved into the house. These rooms proved adaptable once again as tenement flats. Rooms became homes where families cooked and ate, cleaned, washed laundry, and slept. The 18th-century families and their servants, the lawyers and their clerks, and all the tenement families that lived within these walls are united by their use of the same front door and back stairs.

By 1979, the house was empty. The basement and third (attic) floor had already become uninhabitable when this period of neglect saw even more serious structural issues ignored. Rafter ends, floor joist ends and window heads rotted, decorative plasterwork was lost, and vandalism all led to the near-imminent collapse of the house.

The welcome but short-lived presence of caretakers in the early 1980s temporarily safeguarded the house. Though regrettable now, at this time the tenement layers of wallpaper and linoleum and the timber-framed partitions which were used to decorate and subdivide the house were removed, with only traces remaining to stabilize the house. The crude installation of electrical services also damaged significant decorative features.

Read more: The best pubs in Dublin for a pint of Guinness and a bit of craic

By the late 1990s, the house was almost lost with major structural failure, decay, and dry rot. The back staircase was unfit for use, as was the basement flight, preventing access beyond the ground floor level. Treads had worn away and all but seven balusters had been entirely removed from the stairs.

Internal wall surfaces, dating back to the late 18th century, were largely intact particularly in the back hall and stairs where Reckitt’s Blue and Raddle red, synonymous Dublin tenement paint colors, survived in the entrance hall, back hall and stairs. Significant work was required to save the front façade, the roof and rafters, and sash windows, of which only six of 18th-century origin remained.

The 14 Henrietta Street conservation project employed an array of expert craftspeople in stone repairs, wallpaper conservation, linoleum reproduction,  joinery, historic paint and surface finishes, specialist decorative plasterwork, and repairs to mid-to-late 20th century tiled fireplaces. All repairs and works were done on-site and for a time the house was once again full of industry.

Today, a tour of 14 Henrietta Street connects the visitor to the personal stories of many of the house’s former residents and reveals the building’s hidden histories through recreated immersive rooms, audio and film.

Read more: A million Irish turned out for Mass at the 1932 Eucharistic Congress