Over four days in Dublin from June 22 to 26 June 1932, a large percentage of Ireland's population turned out for the Catholic church to pray. 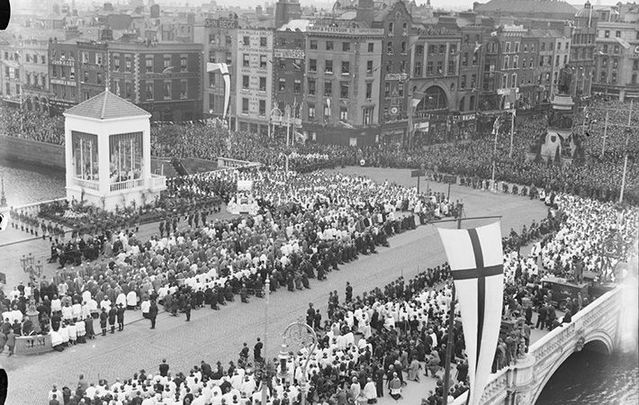 The closing ceremony of the Eucharistic Congress that was held in Dublin in June 1932. Public Domain / WikiCommons

While Ireland was not a Republic until 1948 officially, in 1932, the Irish government under, Éamon de Valera, aimed to make it feel separate from England with one million turning out for Mass.

Ireland may not have officially become a Republic until the Republic of Ireland Act 1948, but early in the previous decade, the government under Éamon de Valera was already attempting to present our nation to the world as a state completely separate from England.

And how did they go about it? Well, what was the largest difference between the Irish population who wished for a free, united Ireland and the loyalists who wished to remain tied to the UK?

Just three months after becoming Taoiseach, de Valera and his government hosted the 31st International Eucharistic Congress. The events were massive and the fact that Dublin was chosen in the year of the 1,500th anniversary of the beginning of St Patrick’s mission to Ireland made it all the more celebrated.

An incredible one million people attended the main pontifical High Mass on June 26, while the “Men’s Mass” on June 23 saw approximately 250,000 people in attendance; 200,000 the next day at the “Women’s Mass” and another 100,000 at the “Children’s Mass.” In total, approximately 25% of the population of Ireland at the time attended one of the masses.

Although not attended by Pope Pius XI, he was heard from the Vatican during the High Mass via a PA system set up around the city, the likes of which had never been seen anywhere else in the world.

Another highlight of the High Mass was the voice of famous Irish tenor John McCormack, a papal count since 1928, who sang the offertory motet, 'Panis Angelicus.'

The Pope also sent his Papal Legate Cardinal Lorenzo Lauri in his stead, a man who was taken into the hearts of the Irish people over the five days of the Congress. He was made a Freeman of Dublin and remained in Ireland for some time after the Congress, traveling to various towns around the country. He was warmly received everywhere he went.

During Ireland’s history as a British colony, the majority Catholic population had been mistreated by the Protestant minority, particularly during the period of the Penal Laws, which outlawed Catholic practices and generally denied Catholics the rights enjoyed by Protestants.

By hosting the Congress in Dublin in such as fantastic fashion, Britain and Unionists in Northern Ireland were being sent a message that this time was well and truly over.

Poignantly, de Valera had come under fire from the Irish clergy during the Civil War as many of them supported the Anglo-Irish Treaty of 1921, which Dev rejected.

As a result of his anti-Treaty stance de Valera was excommunicated from the Church. He remained a devout Catholic throughout his life, however, and a decade later, when he and his new party, Fianna Fáil, came into power on March 8, 1932, their mission seemed to be to prove that the old Unionist slogan – 'Home rule is  Rome rule' – may have been right all along.

One of the most interesting aspects of the Congress, however, is the way in which this event may have had quite a vital part to play in Ireland eventually becoming a Republic. De Valera had made use of the Congress to deliver a snub to the representative of the British Crown in the Irish Free State, the governor-general, James MacNeill. De Valera had previously made known his intention to get rid of the Governor-General and had carried out several gestures to show his disgust in the run-up to the Dublin celebration, walking out of an event also attended by MacNeill. The final straw, however, was that the government failed to invite MacNeill to the event in Dublin Castle where the Papal Legate was officially welcomed.

Later in the year, as his frustration at these snubs mounted MacNeill resigned. This allowed de Valera to appoint his own man, Domhnall Ua Buachalla, who quickly heeded the Taoiseach’s requests to lessen the power of the Governor-General, giving the Irish government more leeway until the position was finally removed altogether by the Constitution Amendment Act in 1936.

For Loyalists in Northern Ireland, the Eucharistic Congress confirmed all of their worst fears, as they felt it showed the way in which they would lose out in a Catholic-dominated United Ireland. Catholics traveling from Northern Ireland were attacked on their journey and it instilled partition in the Unionist mindset.

Ireland was to again show its dedication, in the same manner, some 47 years later when crowds piled into Phoenix Park and into Galway to hear Mass said by Pope John Paul II.