Pope John Paul II became the first pope to ever visit Ireland when he arrived in Dublin for a three-day visit on September 29, 1979. 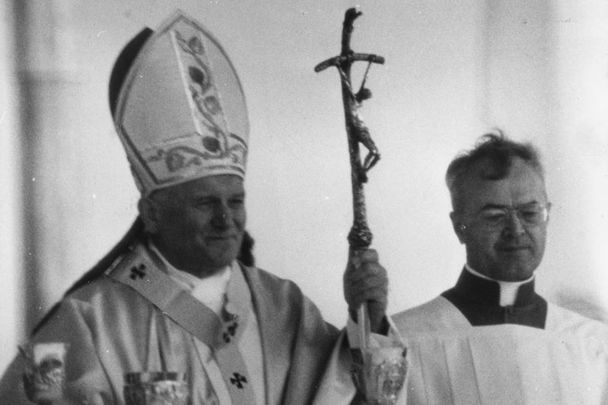 The numbers were phenomenal when you consider that the population of the Republic was 3,368,217 in 1979.

In Dublin's Phoenix Park, more than 1 million people attended the first ever papal mass in Ireland.

Pope John Paul II's first day in Ireland was so jam-packed that the he jokingly claimed the Irish were trying to kill him.

There was a mammoth roar from the giant crowd when the pope's plane, an Aer Lingus Boeing 747 named St. Patrick, flew over Phoenix Park en route to Dublin Airport.

When he disembarked at Dublin Airport, the pope kissed the ground and was greeted by President of Ireland Patrick Hillery.

The pope then took a helicopter to Phoenix Park where he said mass for more than 1.25 million people.

Afterward, the he traveled to Killineer, near Drogheda in Co Louth, where he led a Liturgy of the Word for 300,000. During this event, Pope John Paul II appealed to the paramilitaries to lay down their arms.

"I wish to speak to all men and women engaged in violence," he said. "I appeal to you, in language of passionate pleading. On my knees I beg you, to turn away from the path of violence and to return to the ways of peace."

The visit to Drogheda in the border county of Louth was as near to the North as the pope would get. A planned mass in St Patrick's Cathedral in Co Armagh in Northern Ireland had been canceled as his advisers feared he would be a target for loyalist paramilitaries.

Just weeks earlier, the British Queen's cousin, Lord Louis Mountbatten, had been killed in an IRA bomb attack on his boat in Co Sligo while 18 soldiers were killed in two explosions near Warrenpoint, Co Down.

After the event in Killineer, the pope returned to Dublin where some 750,000 people greeted him as he traveled through the city in an open-top 'popemobile.'

He then visited Áras an Uachtaráin and met with journalists before spending the night at Apostolic Nunciature on the Navan Road in Cabra, Dublin.

The following day, September 30, the pope toured Clonmacnoise, an ancient monastery, in Co Offaly before celebrating a Youth Mass for 300,000 at Ballybrit Racecourse in Co Galway.

"Young people of Ireland, I love you," he told the Youth Mass.

Afterward, he visited one of Ireland's most holy sites, Knock Shrine in Co Mayo, which he said was "the goal of my journey to Ireland." He said mass outdoors for some 450,000 people.

On October 1, his final day in Ireland, the pope visited St. Patrick's College, Maynooth, the National Seminary, in Co Kildare. He said his final mass of his Irish visit at Greenpark Racecourse in Co Limerick for a crowd of 400,000. He then left Ireland from Shannon Airport, bound for Boston for a six-day visit to the US.

Here are some TV highlights of Pope John Paul II's visit to Ireland in 1979: