In 2011, Jean Kennedy Smith, proud of her strong Irish roots, was welcoming into Irish America's Hall of Fame. 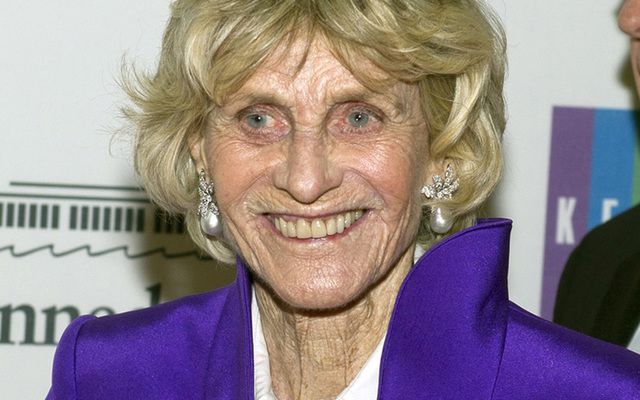 Often referred to as the shy Kennedy, Jean Kennedy Smith quietly blazed her own trail while still holding true to the family legacy of public service.

The last of the Kennedy siblings, Jean Kennedy Smith sadly passed away, aged 92, on June 17, 2020. devoted her life to advocating for the disabled and working towards peace in Northern Ireland.

She was educated at a variety of Sacred Heart schools, both in the United States and England, where her father served as the US Ambassador from 1938 to 1940.

During World War II, Smith’s eldest brothers, Joseph and John, served in the Navy as an aviator and PT boat commander, respectively. After Joseph’s death in 1944 during a flight mission, she was chosen to christen the USS Joseph P. Kennedy Jr., a Navy destroyer named after her brother. In 1948, her older sister Kathleen was killed in a plane crash. 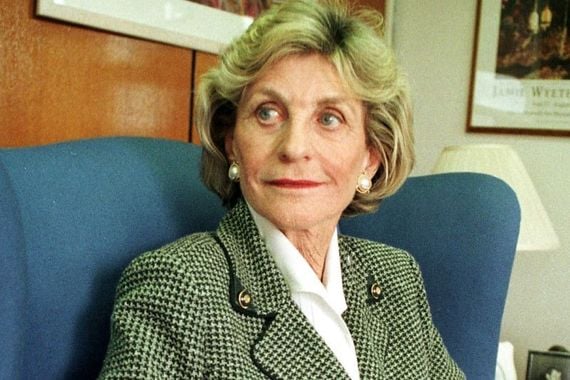 Jean attended Manhattanville College, at the time a Sacred Heart school and the alma mater of both her mother Rose and sister Eunice, graduating with a degree in English in 1949. While there she met and became friends with her future sister-in-law, Ethel Skakel, who married Bobby Kennedy in 1950.

On May 19, 1956, she married Stephen Edward Smith in Saint Patrick’s Cathedral in New York City, where the couple eventually settled. The Smiths had four children: Stephen Edward Jr. in 1957, William Kennedy in 1960, Amanda Mary in 1967 (adopted), and Kym Maria in 1972 (adopted from Vietnam). They remained married until Stephen’s death from lung cancer in 1990.

On the campaign trail

In addition to their legacy of public service, the Kennedys are known as being a close family who work together – the most well-known example is probably Robert Kennedy’s term as Attorney General during JFK’s presidency. Jean worked on her brother John’s political campaigns, starting with his 1946 Congressional run for office.

In 1960, with the rest of the family, she traveled across the country: going door to door, talking to voters, answering their questions, and gathering support for her brother’s campaign. In September, she left the campaign trail – her second child was due and born later that month. Two months later, JFK was elected president by one of the slimmest margins in history. In telling her campaign trail stories, Kennedy Smith recently recalled being asked to lend Jacqueline Kennedy a maternity coat for the official announcement that Kennedy had been elected president.

Her brother’s presidency would have a great impact on her life. Kennedy Smith, as well as her sister Eunice, traveled with JFK when he made his historic trip to Ireland in 1963. Together the three siblings visited Dunganstown in County Wexford, the place their great-grandfather came from. Later that year, President Kennedy was killed by an assassin’s bullet in Dallas.

Five years later, Sen. Robert Kennedy was running for president, and Kennedy Smith and her husband helped to run the campaign. They were at the Ambassador Hotel in Los Angeles when Bobby was assassinated there.

Read more: How much is the Kennedy family worth?

Advocate for the disabled

In 1964, Kennedy Smith was named a trustee of the Joseph P. Kennedy Jr. Foundation, a non-profit organization founded in her brother’s memory and currently devoted to improving the lives of the intellectually disabled. That same year, she was named to the Board of Trustees of the Kennedy Center for the Performing Arts, a position she has been named to by every President since.

In 1974, Kennedy Smith founded Very Special Arts, now known as VSA. Associated with the Kennedy Center, the organization is devoted to creating “a society where people with disabilities learn through, participate in, and enjoy the arts.” VSA is an international organization, working with 52 international affiliates as well as a network of affiliates in the United States. A major influence and motivation in Kennedy Smith’s work with the disabled was her older sister Rosemary, who was developmentally disabled from birth. 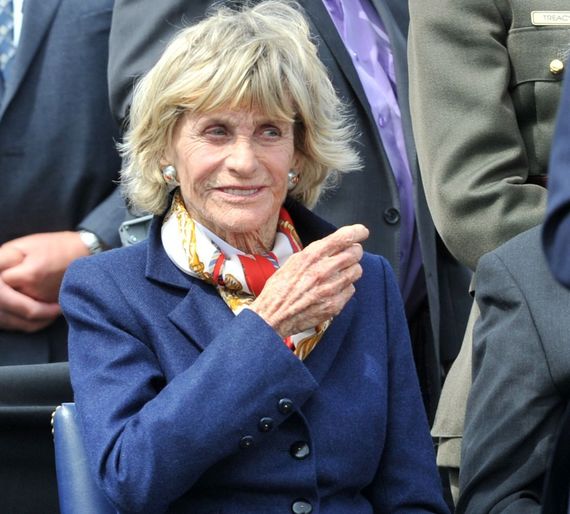 In 1993, President Bill Clinton appointed Kennedy Smith the U.S. Ambassador to Ireland. It was a thrilling honor and achievement for many reasons – particularly because it granted her a direct, active role in politics and made her and her father, Joseph Sr., the first father, and daughter to serve as U.S. ambassadors. Additionally, as she stated in a previous interview with Irish America, “Next to President of the United States, Ambassador to Ireland is surely one of the best jobs an Irish American can hold.”

Kennedy Smith was appointed ambassador at a crucial moment in the Northern Ireland Peace Process. Fighting and conflict had been frequent, but signs of change were apparent. In September 1993, John Hume and Gerry Adams issued a joint statement outlining the Hume/Adams Initiative, the goal of which was the creation of a peace process. Crucially, the IRA welcomed the initiative. The next important step would be the issuing of a U.S. visa to Sinn Féin President Gerry Adams. Kennedy Smith would play a crucial role in this task.

Since the outbreak of the Troubles in 1969, the U.S. government had refused to grant a visa to Adams, whom they considered to be a terrorist. In early January 1994, Adams again applied for a visa. However, he presented himself to the U.S. Embassy in Dublin instead of the U.S. Consulate in Belfast. It was a crucial moment in Kennedy Smith’s ambassadorship. Having paid close attention to the events in the North since her arrival in Ireland, and having traveled there several times, Kennedy Smith believed that Adams and Sinn Féin were serious about the peace process. Ever the diplomat, before making any decision she contacted Taoiseach Albert Reynolds, who favored the granting of the visa. Then, she consulted with her brother Senator Ted Kennedy. He also got on board. Shortly after that, Hume also gave his support for the visa. Kennedy Smith made her decision: she sent a cable to Washington recommending that the visa be granted.

The U.S. government had a lot to consider before granting the request. Foremost was the “special relationship” between the U.S. and Britain. Yet, President Clinton had made a campaign promise to grant Adams a visa, and the Irish American lobby was pushing for it. The British government vehemently worked to block the visa. Everything came down to the wire. Finally, on January 29, 1994, President Clinton ordered the visa be granted. Two days later, Adams entered the U.S. and made an appearance on Larry King Live. The worldwide censorship of Adams and Sinn Féin was over.

Six months later, Kennedy Smith was faced with another important visa issue, this time with an IRA ceasefire hanging in the balance. Sinn Féin wanted to send Joe Cahill to America to talk with their supporters in the U.S. Cahill was 74 and had fought the British for most of his life. The IRA made a condition of their ceasefire the granting of a visa to Cahill. Kennedy Smith and Reynolds worked hard to convince the U.S. government to grant the visa. The president agreed and Cahill entered the U.S. The day after, on August 31, the IRA declared a ceasefire.

Throughout the remainder of her tenure as ambassador, Kennedy Smith played an important role in the peace process. In September 1998, seven months after the historic Good Friday Agreement, she resigned as ambassador. The late historian and Pulitzer Prize-winning author Arthur Schlesinger said of Kennedy Smith, “Jean may well be the best politician of all the Kennedy’s, but she needed this position to really show that.” 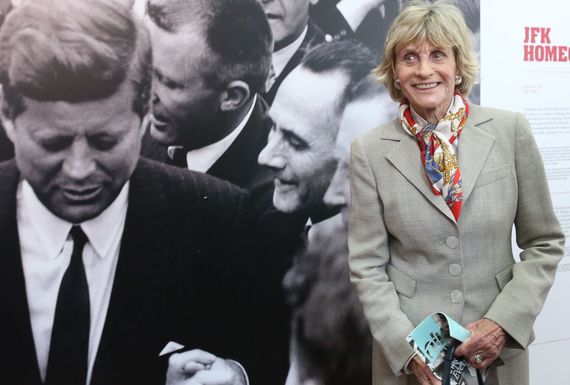 Kennedy Smith always kept a lower profile in comparison to her siblings. In more recent years she rarely gives interviews, though she did give one to ABC News in January 2011, on the 50th Anniversary of her brother’s presidential inauguration.

As ever, till the end family remained a priority. In August 2009, Kennedy Smith chose to miss her sister Eunice’s funeral to stay by Edward Kennedy’s side as he was dying of cancer. She was the last of the nine Kennedy siblings, but she did not dwell on that, focusing instead on the here and now.

Since leaving diplomatic service, Jean Kennedy Smith has received numerous accolades for her work to bring peace to Northern Ireland and for her work with the disabled. The government of the Republic of Ireland granted her honorary citizenship in 1998. She has received honorary degrees from multiple institutions. Most recently, Kennedy Smith was awarded the Presidential Medal of Freedom by President Barack Obama for both her diplomatic service and her humanitarian efforts.