Rose Kennedy promised him she would let him know when she got around to writing to Fidel Castro. 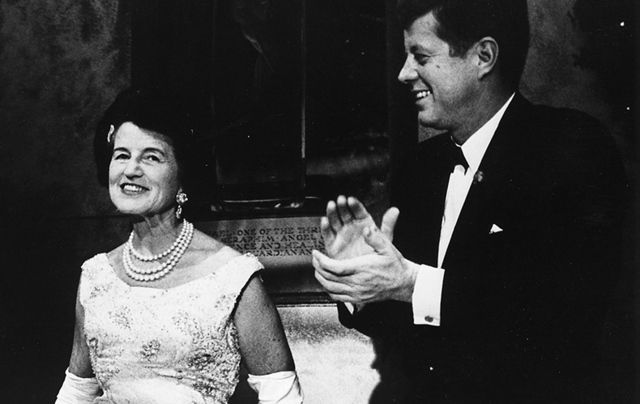 The problems that land on the Resolute Desk for the attention of the Leader of the Free World range from matters of war and peace to complex issues of domestic reforms.

But sometimes family matters make an appearance too, matters that might barely warrant a mention in the footnotes of history but offer an illuminating glance into a President’s personal life.

JFK’s missive to his mother, Rose Kennedy, is one such example.

The typed letter on White House stationery is dated November 3, 1962 – mere days after the conclusion of the Cuban Missile Crisis – and in it JFK asks the matriarch of the Kennedy clan, “Would you be sure to let me know in the future any contacts you have with heads of state, etc. Requests [for photos] of this nature are subject to interpretations and therefore I would like to have you clear them before they sent.”

He includes in the letter at Rose’s request a signed picture of himself and Jackie with Soviet leader, Nikita Khrushchev.

“Needless to say,” he adds, “the picture is most interesting and will be highly regarded.”

Here just after Missile Crisis, JFK asks Mother to pls not write Khrushchev again w/o asking him: (via @JFKLibrary) pic.twitter.com/Jz0soy2amT

Rose Kennedy replied a week later that German Chancellor Adenauer and President Eisenhower had autographed the books she gave him last Christmas (1961) and that 'this year' she had already asked French President Charles de Gaulle to for do the same Christmas that year.

She cheekily added, “When I ask for Castro’s autograph, I shall let you know in advance!”

Rose Kennedy responds to JFK's note about her contacting Khrushchev--pledges to notify him before writing Castro: pic.twitter.com/j9lO6qTDEC

Years later her youngest son, Ted, recalled that the letter to Khrushchev really startled the Soviets when it arrived at the Kremlin.

“She liked to give presents of signed books so if somebody published a book she would get the author to sign a few copies and give them as Christmas presents,” Ted Kennedy recalled.

“And so it was that at the very height of the Cuban missile crisis when Soviet secretary general Nikita Khrushchev was penning a personal letter to President Kennedy that a letter arrived on his desk from “a Rose Kennedy of Hyannis Port, Massachusetts, asking him to sign some of his books.“The KGB were very interested in the letter and had hundreds of people analysing it, trying to figure out what message the Kennedys could be sending.”

In a life that spanned more than a century the lives of Rose’s most famous children were touched by history-making triumphs, personal tragedy, secrets and sumptuous wealth.

Her biographer, Laurence Leamer, concluded Rose, “was as ambitious as [her husband] Joe and in a sense even more so because she lived through her children.”

“She's been ignored by history. Yet she's the only person who's lived the whole story – the only one who could speak with honesty and depth about everything that happened.”

Even though she outlived four of her children, Rose seemed to retain something of an optimistic outlook until the very end.

“We met presidents and dukes, kings and queens,” she recalled. “We had money, talent and relationships with one another; we boasted of good looks. I'm not surprised when some tragedy came ... It was too perfect to last.”