Gerry Adams, the former president of Sinn Féin, offers his condolences on the passing of Jean Kennedy Smith, the former US Ambassador to Ireland. 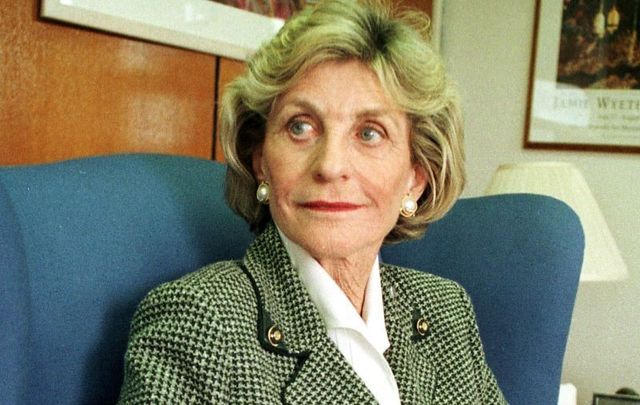 Jean Kennedy Smith, the former US Ambassador to Ireland, in her office at the US Embassy in Dublin in October 1997. RollingNews.ie

Editor's Note: Jean Kennedy Smith, the former US Ambassador to Ireland, passed away in New York this week at the age of 92. Here, Gerry Adams, the former president of Sinn Féin, offers his condolences.

I want to extend my condolences and solidarity to the family of former US Ambassador to Ireland Jean Kennedy Smith.

Her appointment to the role of Ambassador to Dublin by President Clinton in 1993 was pivotal to the development of the peace process. She already had a relationship with John Hume through her brother Teddy. After she arrived in Ireland she and Fr. Alec Reid became close and contributed significantly to the efforts for peace, to the IRA cessation of August 1994, and eventually to the signing of the Good Friday Agreement in 1998.

Fr. Reid was hugely impressed by Jean Kennedy Smith’s commitment to peace and willingness to take risks to advance it. He used to call her An Speir Bhean – the spirit woman - and he worked closely with her and An Taoiseach Albert Reynolds to overcome obstacles.

I met Jean Kennedy Smith many times during those years. She stayed with the process throughout her years in Ireland and later when she returned to the USA. She was a wonderful, compassionate, formidable woman who played a key role in persuading her brother Senator Ted Kennedy to support a visa for me in 1994. She also worked closely with Senator George Mitchell and President Clinton during those challenging times and with Sinn Féin’s Rita O Hare.

Her strength of character shone through on many occasions but none more so than when I applied for a visa in January 1994. Jean Kennedy Smith sent a cable to the State Department endorsing the visa application. Some members of her staff sent a dissenting cable to express their opposition. She removed the staff and faced the wrath of the State Department and of Secretary of State Warren Christopher who opposed giving me a visa.

In the days that followed, the British government engaged in an intense private and public campaign to keep me out. The British Embassy in the US and its ambassador Sir Robin Renwick worked round the clock arguing that a visa for me would be a diplomatic catastrophe. They sought and received the support of the House Speaker Tom Foley and the US Attorney General Janet Reno and the Head of the FBI Louis Freeh.

But on the other side, Jean Kennedy Smith, her brother Senator Ted Kennedy and three Democratic Senate colleagues, Chris Dodd, John Kerry, and Daniel Moynihan, all backed giving me a visa. With Irish America supporting the visa President Clinton agreed. Jean also played a key role in getting Joe Cahill a visa. She and Fr Alec sat up all night waiting for word from Washington.

Jean Kennedy Smith dedicated her long life to helping others. Her record of achievements as a philanthropist and supporter of programs to help and support citizens with disabilities is legendary. I am glad to have known her. We exchanged trees one time and I also gave her a puppy dog. Tá sí ar slí an fhirinne anios.

On my own behalf, I want to extend my deepest sympathies to her family. Jean was an extraordinary human being. Her family can be very proud of her achievements and especially the role she played in making peace in Ireland. Ar dheis Dé go raibh a h-anam.

Reflecting on the important contribution Jean Kennedy Smith made to the peace process. “Jean was an extraordinary human being. Her family can be very proud of her achievements and especially the role she played in making peace in Ireland.” pic.twitter.com/RiNQLx2u5m