The British were furious at Bill Clinton for letting Sinn Fein president Gerry Adams visit the U.S in 1994. 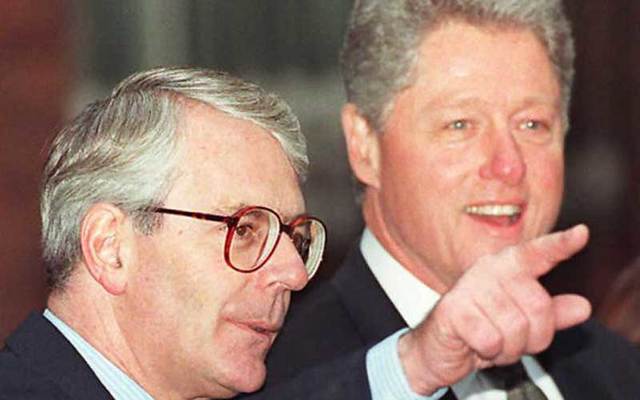 The British were furious at Bill Clinton for letting Sinn Fein president Gerry Adams visit the U.S in 1994.

Adams was granted a visit to New York to speak at a conference on Northern Ireland between January 31 and February 2 that year, the Daily Mail reports.

“The movement in which Gerry Adams has long been a leading figure has murdered not only thousands of its own countrymen, but also one member of our Royal Family, one Cabinet Minister's wife, two close advisers to Margaret Thatcher and Members of Parliament, two British ambassadors - and small children in our shopping centres,” read the note, which is part of around 500 Cabinet Office files released by the National Archives in Kew, west London.

Major wrote to the U.S. president expressing his dismay ahead of Adams’ visit.

“Tony Lake will, I am sure, have told you how strongly we disagree with the decision to admit Gerry Adams to the United States,” he wrote according to a draft letter.

“He has been closely associated with terrorism for two decades. In the Joint Declaration, he was offered a route into the democratic process, and into negotiations with us and with the Irish Government. He and his movement have not taken it.

“As you will know the evidence is that the IRA intend to continue their strategy of terrorism, and do not have courage to make peace and compete in the democratic arena.”

Irish-American leaders in the U.S., including Edward “Ted” Kennedy, were influential in pushing Clinton toward the decision to admit Adams.

Senators Kennedy, John F Kerry, Daniel Patrick Moynihan, and Christopher J Dodd made the case for the visit in a letter to the president.

“While no one can be certain that a visa for Mr Adams will result in the IRA's accepting the condition established by Ireland and Great Britain for participation in the peace process, the United States cannot afford to ignore this possibility and miss this rare opportunity for our country to contribute to peace in Northern Ireland,” said the letter.

In the note to Lake, Lyne wrote: “It is sad, paradoxical, and misguided of the Kennedys, having lost two brothers to acts of terror, to be pressing you to admit a terrorist leader without an end to terrorism or even a commitment to end terrorism.”

The Daily Mail reports that a cable dating February 10 from Peter Westmacott, then a British diplomat in Washington, details information garnered from Jane Holl, then of the US National Security Council, who had been present during a phone call between Major and the U.S. president.

The cable reads: “Dr Holl said that the discussion on Northern Ireland was very brief. The President had raised the subject. He had taken full responsibility for the decision to give Adams a visa.

“It had been a difficult matter of judgment on which the two governments had evidently differed.”