A regular haunt for the Irish in London, the fond memories of good times at Galtymore dance hall in Cricklewood continue to live on. 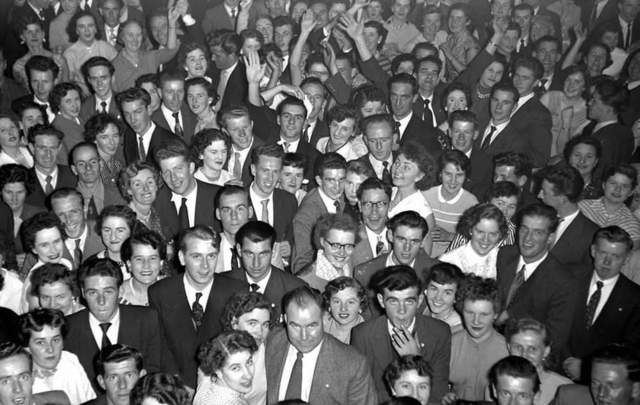 A crowd of people enjoying the evening at Galtymore Dance Hall in Cricklewood. Irish Dance Hall's in London in year's gone by, Facebook

Irish recall the heartache of leaving their homes in Ireland and the mighty fun they had at the famous Galtymore.

There are many Facebook sites set up by Irish people living abroad. At the beginning of December 2019, I posted an article on three of these about having been in The Galtymore ballroom in London, in the summer of 1970.

The response to this piece has been phenomenal. Several hundred Irish people living in London wrote comments about their experience of emigration. I’m adding only a few here to give you an idea of how much they still remember the heartache of leaving home and the fun they had in the famous Galtymore.

“All the Irish food could be had on Kilburn High Road. If you were lucky enough to meet some Irish girls in The Galtymore you might get a feed of rib ‘n cabbage on a Sunday, after the pub. You’d meet half your hometown in the Crown. Going home at Christmas on the ferry with a few bob in your pocket for the mother was the best ever feeling.”

“Was in the Galtymore often times when I first arrived in London. I was 17 and fascinated by England after growing up in a farm in County Cork. I worked in pubs to begin with.

"At half five in the evening, as the pub opened, a steady stream of older Irish men who worked on the building sites arrived in. Most were bachelors who stayed until closing time or when their money was gone. Then they returned to their bedsits to go and do it all again.

"For these men, I guess the streets of London weren't paved with gold. No day goes by that I don’t think about my childhood and where I grew up.”

“Unfortunately that was the downfall of some of the hard-working Irish. They cashed their cheques for liquor.”

“Every man and woman that ever left Ireland had one ambition - that was to return home for good one day.”

“The homesickness of my grandfathers (both of them) burns equally fierce in me. Thankfully, they were born in Ireland, and so I now have my citizenship and passport and can visit as often, and for as long, as the bank manager permits.”

“Was there St. Patrick’s night, 1987.  Big Tom one side and Joe Dolan other side. The crowd were hanging out of the rafters. What a spot.”

“My father left Kinlough, County Leitrim, for London in the late 50s, met my mother in the Galty in the early 60s, married and lived in north London. I worked there first in the tea bar then moving onto the dance hall bars where I met my now wife. The Galtymore could tell a few tales similar to this I’m sure!! Great music. Great times.

“I felt so many things reading this. The memories poured back into my mind of the happiest times ever as a child. I had a few dances at the Galtymore and loved every minute. Thank you for bringing back such poignant memories, mostly happy but also some sad. “

“I also have some great memories of the Galtymore in Cricklewood in the mid-sixties watching Big Tom and all the show bands that would play there during lent. It had two dancehalls and a balcony with the biggest bar I've ever saw. Oh, how much I enjoyed going there.  Wouldn't we love to turn the clock to those timelessness days of innocence and fun at only seventeen years old?”

“Many happy memories, I was only 16 when I arrived there on a very cold January Sunday morning. I was gone two weeks before anyone missed me. I am 71 now and never looked back. I had a wonderful life but I worked from the time I arrived till I retired. I never claimed a penny in my life or been on the dole. I am now enjoying my life, got my daughter her husband and my grandchildren home from NZ for Christmas.”

“I wonder is it just a dream. A lot of people returned to Ireland and found that they couldn’t settle hence returned to UK. It’s a huge change of culture.”

“The Craic was good in Cricklewood.”

“My dad was a doorman there when I was a child. He wore an emerald green uniform, and they had a tea dance every Sunday afternoon, with no alcohol. That's unimaginable now, no booze.”

“These days you wouldn’t meet many English men around Kilburn or Cricklewood. I returned for Champions League Final in 2011 and my God it had changed. It was ‘Spot the Irish Man.’ Most of the Irish pubs had gone including the Crown, now a hotel. How time have moved on.”

And a neighbor of mine, living in London added the following comment:

“Jean. Not all of us were heartbroken Irish men. They were wonderful days. I remember the time you and your Athlone friends came to London to work the summer holidays. I was working in the great Galtymore from 1968 to 1972. We received 5 pounds for a shift, plus free entry plus tips. And I met my wife there. Great times.”

What amazed me is how, in January 2020, the several hundred who commented, still remember those early days in London so very very clearly.