One Irish family's story of emigration - the Dunnings from Drumlosh 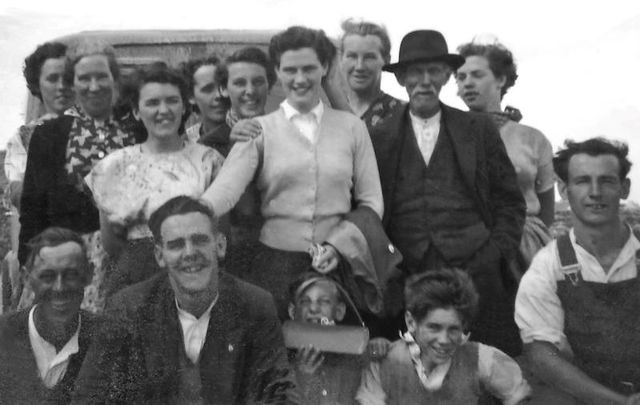 The land flooded every year, as it was situated on the banks of the River Shannon. The family’s income came from selling turf, which they saved during the summer. They also sold vegetables, which they grew on their land. The peat soil was ideal for this. Much manual labour was involved in both these activities. As the boys grew older they bought a tractor and did some work for other farmers around the midlands of Ireland. However, there were too many mouths to feed, in the small house, on the bog.

In the above picture, we see Eileen Dunning, dressed in her 'Sunday best,' about to emigrate in 1954. The hackney van has arrived to take her to the railway station in nearby Athlone. Family and neighbours have gathered to wish her farewell.

Eileen is one of 16 children born to Michael and Kate Dunning, in Drumlosh, County Roscommon. 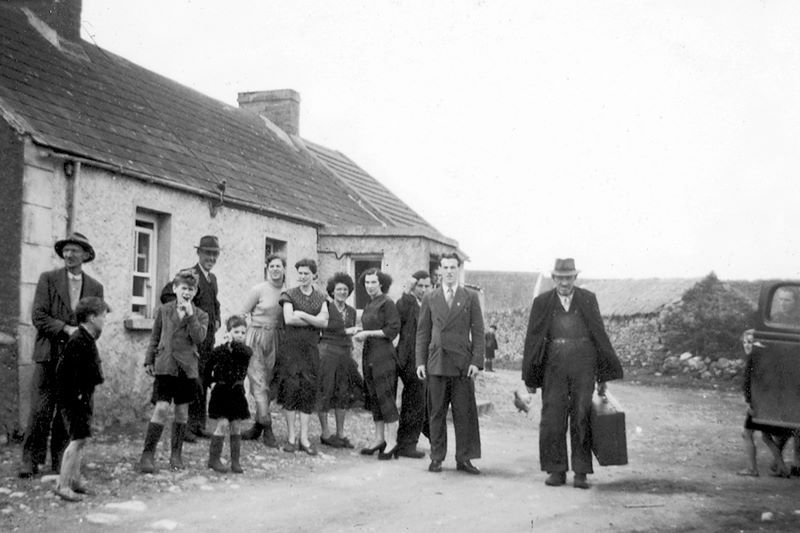 Here we see Eileen’s brother, Tony Dunning, emigrating also. It is 1952. He, too, is in his ‘Sunday best.’ The hackney driver is carrying Tony’s case. Again, his family and friends have gathered to see him off. No doubt, they are well used to bidding farewell to neighbours, because emigration was a very regular occurrence then.

On the day Tony left, his mother took up a fountain pen and wrote on a wooden wardrobe, in a bedroom of their house. She wrote, ‘Tony Dunning left home today on November 1st 1952.’ He was her sixth child. The ten children born after Tony all remember reading this regularly. It was a constant reminder of the reality of emigration in their lives.

Between 1841 and 1921, the population of Ireland almost halved; it decreased from 8 million to 4 million in 80 years. Starvation and famine-related diseases were responsible for the deaths of over one million. However, the decline in population was mainly due to emigration.

Over the years, many factors led to such widespread emigration in Ireland. Families were much too big. Apart from the eldest son, who inherited the land, there wasn’t much for the others to do. They knew that steady paid work could be found in foreign lands. A sense of adventure also enticed others to leave.

A large number of Irish emigrants always headed west, across the Atlantic Ocean, to New York and Boston. However, after the Great Depression in America during the 1930s, jobs there became very scarce indeed.

When the war ended in England, there was a huge demand for cheap unskilled labour. They were needed to rebuild all the bombed sites. Many Irish emigrants then went east, across the Irish Sea, to Liverpool and London. Eileen Dunning headed to London. 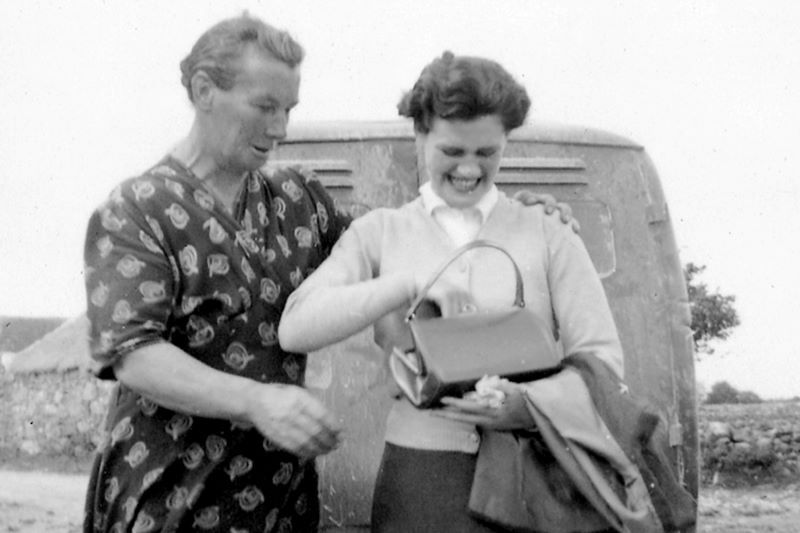 Here we see Eileen with her mother, Kate (neé McManus), checking that her daughter has her ticket for the mail boat to Holyhead in Wales. From there, she will get a train to London. A neighbour from Drumlosh will be waiting to meet Eileen with board and lodgings ready for her.

Eileen Dunning trained to be a nurse. Having worked hard in a London hospital, she then did private nursing. Eileen nursed a Protestant woman, called Mrs. Wheatley, in Kent, southeast England. Mrs. Wheatley’s son, Rex, fell in love with Eileen during this time. As a Protestant, Rex had to convert to Catholicism in order to marry Eileen.

Their wedding took place in Drumlosh in Ireland. Many chickens were reared in advance to feed the wedding party. The feast took place in their own home. Many cakes were baked too. All the Wheatley relations from Kent came to Drumlosh for the wedding. Afterward, Eileen and Rex returned to Kent where she still lives. Eileen is now in her late 80s and is in fine health. 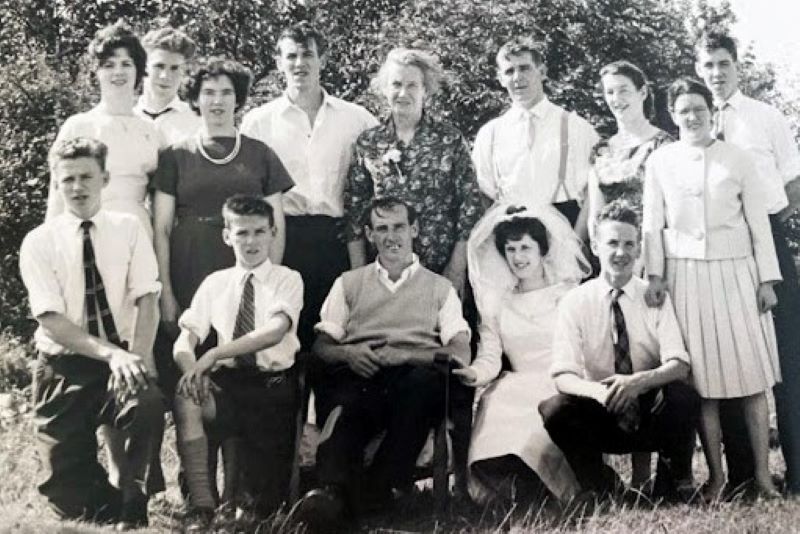 Eileen and her siblings and parents on her wedding day in Drumlosh, Co Roscommon. (Courtesy Jean Farrell)

Mary Dunning emigrated to Australia. Bernadette emigrated to London and Eamonn to Birmingham. Some returned home.

Michael Dunning left home for Boston. He lives there now, in Quincy, Massachusetts. His wife, Martha Hinew, hails from Renvyle in Connemara.

In many Irish families, those who emigrated sent money home very regularly. This money was much needed to help rear their younger siblings. The fare to America and England was also sent back. This enabled their sisters and brothers to emigrate too.

*This article was submitted to IrishCentral by Jean Farrell. If you would like to share your Irish family's emigration tale with us, email us at Editors@IrishCentral.com, or sign up for our IrishCentral Storytellers contributors platform here.