A recent encounter in Ireland leads Jean Farrell to revisit and learn about some old Irish superstitions. 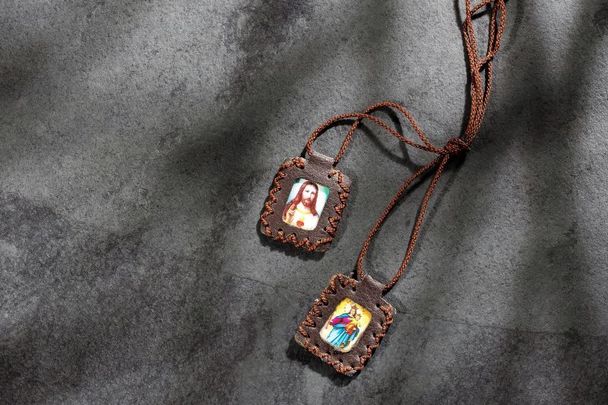 Scapulars were used in Ireland to ward brucellosis off of cattle. Getty Images

I was in a council office in Ireland lately. I was given a ticket with the number 70 on it.

“Y’know, this is just like Bingo,” the woman on my right said aloud. We all laughed.

I had noticed that this older woman had a shopping bag that was full of straw. She told us she had just come from St. Peter’s church and the crib there.

“You know if you put straw from the crib under your mattress you will never want for money?” This was news to myself and Mrs. 72.

“And I went into that lovely shop near the church and got this,” she continued.

Poking amongst the straw in her bag she held up a small statue of Saint Joseph.

“My daughter is selling her house. If she buries a statue of Saint Joseph in her garden, her house will sell.” This also was news to us both.

Mrs. 69 leaned forward again and began rooting in her bag. “And I was delighted to see these in the shop,” she said, pulling out a long brown string, to which much straw was attached.

Mrs. 72 and myself said we hadn’t seen scapulars for fifty years. Plucking straw off them she told us that her granny used to wind these around the horns of the cattle so that they wouldn’t get brucellosis. Mrs. 72 began to giggle, muttering about superstitious nonsense. Number 69 was called and she left, unimpressed with our lack of faith.

“My mother used to get little boxes in the post with tiny pieces of wedding cake in them,” I said. “My granny told us that if we put some of this wedding cake under our pillow we’d dream of the man we were going to marry.”

We decided that Mrs. 69 wouldn’t be impressed with this practice at all, as there was no saint involved. This was superstition, hers was faith.

We remembered other customs based on faith. My mother always put blessed palm behind a picture so that the house wouldn’t burn down.

“My nephew searched high and low for a memory stick he lost,” Mrs. 72 told me. “His granny said she’d pray to St. Anthony and it would turn up. It didn’t."

“'What was it you lost?’ she asked him. When he explained it was something to do with his computer she said, 'That’s why you didn’t find it. Saint Anthony doesn’t understand about that modern stuff.'"

We laughed and Mrs. 72 announced that she didn’t believe a word of all this superstitious nonsense.

“But I’ll tell you something I told no one,” she then said quietly. “My last child was leaving for London a while ago. He was dabbling in drugs and I was worried sick about him.

"His favourite jacket needed mending. I sewed a small miraculous medal into the lining. What does that say about me?”

“That we keep all our options open maybe?” I suggested.

“I cried for three weeks when he left,” she added. “Now I’d cry for a month if he said he was coming back. What am I like?”

Suddenly our chat was interrupted. Mrs 69 was back.

“Ladies,” she announced. “I forgot to give ye some straw for under your mattresses.” She had a handful each for us. “Ye’ll never want for money again. Here ye are.”

“Maybe it’ll undo the curse I put on myself,” she told me. “As a child, I was supposed to be saying three Hail Marys every night to keep me ‘pure and holy’. Instead, I prayed to be ‘poor and holy’ - that’s what I thought it was. And my prayers were answered - well, half them anyway!” We laughed.

I gave her my lump of straw and said to stick the whole lot under her mattress. Just then, our numbers were finally called.  We collected our purchases and went our separate ways.

The other day I was standing in the queue in the post office. I felt a tap on my arm. It was Mrs 72.

“I’m laughing since I last saw you,” she told me. “Every time I think of those cows in the fields with scapulars hanging from their horns I get a fit of the giggles?”

I laughed too and asked her had she put the straw under her mattress. She said she had and is living in hope.

“I’m even helping God to deliver the goods,” she told me. “I’m buying a lottery ticket twice weekly, and I’m praying to St Jude - remember him, for hopeless cases, like me.”

I laughed all the way home and thought isn’t it wonderful to meet people like her - people who make you laugh and think.

And if she does win the Lotto I’ll be over to the crib next year for some straw, like Mrs 69.