Thirty-two Irishmen were sent to a labor camp - one for each county in Ireland. 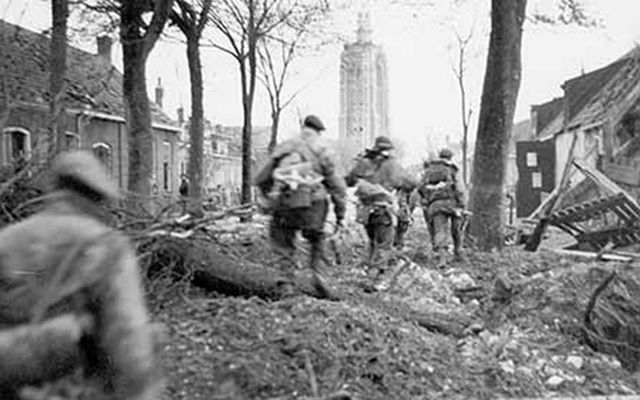 Today, May 8, marks Victory in Europe Day, commonly known as V-E Day, a day celebrating the formal acceptance by the Allies of World War II of Nazi Germany's unconditional surrender of its armed forces.

Even by the standards of the Greatest Generation, the life of Derryman Harry Callan has been nothing short of extraordinary.

Callan first went to sea at the tender age of 16.  Conscription was never introduced to Northern Ireland during the Second World War, but young Harry joined the Royal Navy anyway.

Joining HM Armed Forces at such a perilous time in British history was never going to be risk-free and Callan’s ship was captured.

“In January 1941 their ship was attacked off the coast of Africa,” said his daughter-in-law Michele Callan, in 2017. “Just off the Cape Verde Islands. They were taken on board and were prisoners at sea from January to March.”

The ship’s capture meant Callan and one other Irishman, Billy English, were doomed to a lengthy period as prisoners of war in Germany. Taken to the city of Bremen, they played cards and smoked to ward off the mind-numbing boredom of life as PoWs.

However, one day their mundane routine was interrupted when the camp’s officers called out their prisoner numbers. They were instructed to head to a nearby gate and found to their surprise that 29 other men had been corralled together.

“When they got to the gate, he realized that all 31 there were Irish,” Michelle wrote. “The other prisoners in the camp thought they were going to be repatriated but that wasn’t the case. Germany actually wanted them to work for free because they were from a neutral country. But they stuck together and refused.

“In the end, they were put into an arbeitserziehungslager. Basically, people who were put into these places for lengthy periods were worked to death.”

Another man soon joined them, swelling their number to 32.

People placed in an arbeitserziehungslager were often worked to death. For minor infractions, Germans might be required to spend a month there for re-education. When they returned home they were often physically and emotionally broken and quick to fall in line with the Reich’s strict laws.

The Irishmen were told they were to spend 28 months in penal camps, a sentence that would ultimately prove fatal for five of the men.

“They were the first to turn the sod on a place called Bunker Valentin,” Michele added. “It was a huge structure the Germans were building near the arbeitserziehungslager to assemble submarines in; the size of four football fields. The plan was to put together five to seven submarines a week from this place.”

The sadism of Nazi officers was unrelenting. One, Kommandant Schauwacker, liked to rub salt into the wounds of men’s injuries and even opened fire on prisoners trying to get to the camp’s medical center.

Eventually, with the war clearly having turned in the Allies’ favor, the prisoners were deemed ‘unfit' for work and the group swapped the physical pain of harsh manual labor for boredom and idleness.

Aware the men were doing nothing of absolutely any use, Callan was given the chance to do odd jobs for a local German doctor. Despite being a prisoner, an unusual rapport developed between him and the family: the doctor’s wife would cook Callan soup – far better than anything he got at the camp – and his kids even took to calling him ‘uncle.’

“It was surreal for him,” Michele added. “If you can imagine during the day he was just a worker in a garden and he was treated well but at night time he had to go back to the camp and that was confusing for him.”

After the war, the family lost touch with Callan but reconnected in 2006 with help from a local historian. The doctor’s children are now well in their 70s but still refer to the Irish prisoner of war who helped their Dad with odd tasks as ‘Uncle Harry.’

The Liberation was not everything the prisoners hoped for, however. Upon their return to Ireland, they were treated with disdain by some for having enlisted in the British Navy. Such hostility to British veterans did not dissipate for many decades.

“Billy English gave an interview to an Irish newspaper,” Michele recalled. “Nobody believed him. They were ridiculed and so the men agreed that none of them was going to talk about it. They kept in touch for a short while but then they needed to move on with their lives.”

Tragically, Callan caught tuberculosis when he returned home to Derry and was placed in solitary confinement for a year – such was the fear of what was then a killer disease.

He then spent a few years working with the cargo ships that docked in Derry but moved to Dublin after the work dried up.

For most of his life, he simply shrugged off questions about his eventful past but was spurred into action after returning to Germany for a BBC documentary called “The Hero’s Return.” There was little to no documentation about the 32 Irishmen held as PoWs and that lit a fire under him.

“When he finally began to tell his story, we were shocked,” Michele recalled. “Shortly after he went back the first time, I sat down with him and suggested that because there were only two of the men left, the story needed to be told and he agreed.”

Michele now works as his carer and has even written a book about her father-in-law's eventful life – “Forgotten Hero of Bunker Valentin – The Harry Callan Story.”

“There’s a school over there that have taken this story on as their project,” Michele said. “Since 2005, they’ve run a commemorative race along the route the men would take from the bunker to the prison in memory of the men. I think it’s great that the generations are carrying on their memory. There was 32 men in this story and there are 32 counties in Ireland and all four provinces are represented. It’s an important story.”