VE-Day, the end of WWII, was marked with civil disturbances around Dublin

Ireland's future Taoiseach Charles Haughey led a band of UCD students to confront Trinity College students who had unfurled Union Jacks during their celebrations of Victory in Europe. 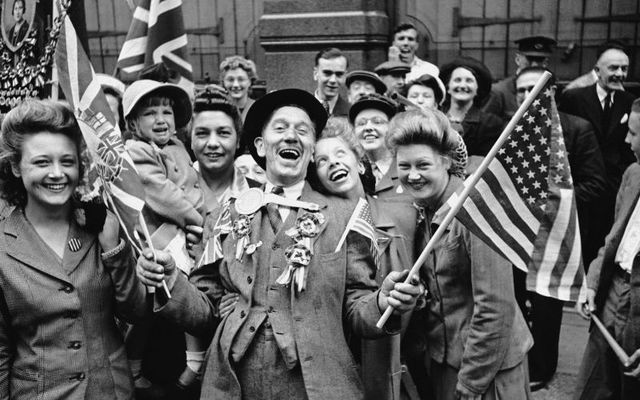 As the Allied Forces celebrated victory in Europe on May 8, 1945, a significant number of Irish people took to the streets of Dublin to take action against about 50 Trinity College students who had unfurled Union Jacks during wild celebrations.

Established in 1592 during the reign of Queen Elizabeth I, Trinity College Dublin represented British rule in Ireland for centuries. The college was viewed as the university of the Protestant Ascendancy and only allowed Catholics to enroll in 1793.

Furthermore, Trinity College students continued to sing "God Save the King" at official events in Ireland for several years after Ireland became a Free State in 1922.

As such, it is hardly surprising that a handful of Trinity College students saw fit to hang Union Jacks around the university after the Allies had finally beaten the Axis forces in Europe.

The public display of affection to Ireland's former ruler didn't go down well with a large portion of Irish people, many of whom were sympathetic to the German cause during the Second World War.

Led by future Taoiseach Charles Haughey, a band of students from University College Dublin - the Catholic rival to Trinity College - rushed to Trinity to confront the celebrating students.

According to legend, the group of UCD students got to the college just in time to see a TrinHity student set an Irish tricolor alight. The young Charles Haughey responded by setting fire to a Union Jack.

The violent scenes simultaneously showcase Trinity's historic links to the British Empire and Irish nationalists' unsavory links to the Nazi regime during the Second World War.

At the end of the war, meanwhile, Taoiseach Éamon de Valera faced international criticism for offering his condolences to the German Ambassador on the death of Adolf Hitler.

The violent scenes on VE Day in 1945 highlighted that troubled relationship with Nazi Germany but also indicated why Ireland had stayed neutral during the war.

The level of hatred and anger that was shown toward the unfurling of British flags in Dublin 20 years after the War of Independence would have increased tenfold if Ireland had joined forces with Britain to fight the Axis Forces and the Irish Government simply could not commit to such a relationship.