German bombardier crashlanded on a remote Wexford beach during the early days of the Second World War. What followed was a remarkable story of romance with an Irish woman from County Kildare. 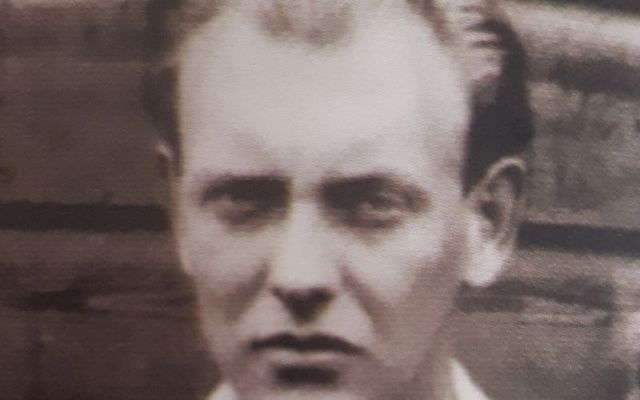 Arthur Voigt's crashlanding in Ireland in 1941 was the beginning of an unlikely and enduring love story. Arthur Voigt Jr.

It is November 2019 and Arthur Voigt Jr. looks on as a lone piper plays a mournful lament at a remembrance service at the German Military Cemetery, in Glencree, County Wicklow.

Dignitaries from Ireland, Germany, and other European countries have gathered at the cemetery to pay their respects to the German war dead who perished on Irish soil during the two World Wars, while a smattering of locals have also braved the cold November conditions to attend the service.

The German Military Cemetery in Glencree is a cornerstone in Ireland's post-war relationship with Germany and is a significant site for anyone with German heritage living in Ireland. For Arthur Voigt, however, the connection is far more personal.

Arthur Voigt Sr. was part of a five-man Luftwaffe crew that belly-landed on Rostoonstown Beach, in County Wexford, on March 3, 1941.

The bombardier and navigator was lucky to survive an ill-fated assault on a British tanker in the Bristol Channel unscathed, but the flight's mechanic Gerd Rister was less fortunate.

Rister was hit by machine-gun fire after his pilot Alfred Heinzel made the questionable decision to make a second bombing run on the tanker without the element of surprise. For Arthur Voigt, this decision was "pure madness".

Rister died in the plane moments after the bombing run, but his crew didn't have time to mourn for him.

With one engine blown out completely and the other significantly damaged, the crew's Heinkel 111 plane had no chance of making it back to the German base in Brest, in northern France.

Faced with a decision of crash landing in Ireland or Britain, the four surviving Germans chose to make for neutral Ireland in the hope that they would receive more favorable treatment than if they landed in hostile Britain.

And so, the four airmen were to be found on a remote beach in southern Wexford, becoming some of the first German soldiers to crash land in Ireland during the Second World War. 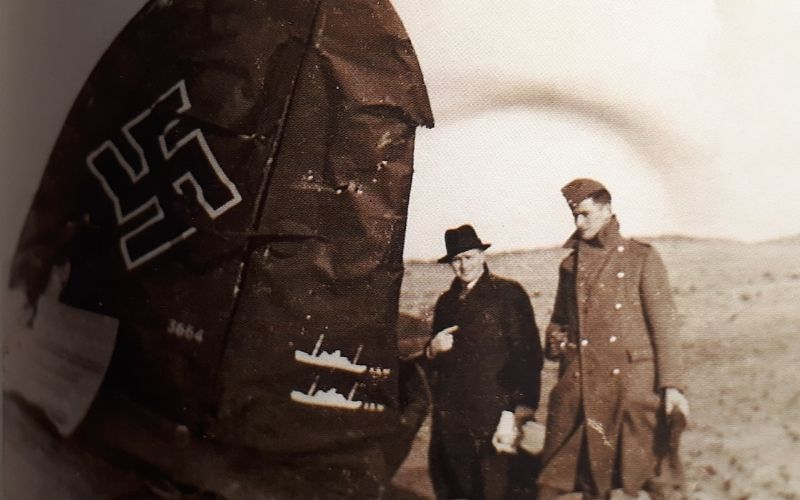 German pilot Alfred Heinzel with an Irish Army officer at the crash site of the Heinkel 111 aircraft. Arthur Voigt

The men were under orders to destroy their plane if they landed in a foreign territory and set about their task after carefully removing Rister's body to the sanctuary of a nearby dune.

Voigt took a stick of dynamite from his pocket and placed it under the plane's partially damaged engine but soon discovered that none of the men had any matches to set it alight. However, salvation came in the form of a bemused elderly Irish man, who provided a box of safety matches at the behest of the desperate soldiers.

Unfortunately for the soldiers, the dynamite still refused to ignite, forcing Voigt into some quick thinking.

He ripped a mounted machine gun from the plane and carried it to a nearby dune along with two full magazines before emptying both magazines into the plane. At long last, a bullet made its way into the plane's fuselage and blew it to pieces. Those shots were the last shots that Voigt would fire during the war and he cast his Walter P38 pistol into a local lake, symbolizing that his fighting days were over.

Unsurprisingly, the commotion alerted Ireland's defense forces and an Irish Army officer soon arrived at the scene astride a motorbike to take the men into custody.

The next day, the men were taken to the internment camp, at the Curragh, thus beginning the "best four years" of Voigt's life and an unlikely and enduring tale of romance.

The men were almost instantly proved correct in their assumption that they were better served crashlanding in Ireland than Britain and internment in the Curragh proved to be a four-year holiday from the horrors of war, especially when Hitler made the ill-fated decision to invade the Soviet Union as part of Operation Barbarossa shortly after their internment.

The soldiers were able to enjoy life in a country that largely avoided the perils of the Second World War, earning a salary from the German Legate, in Dublin, and taking advantage of the Irish Government's "honor system", which allowed internees to come and go from the Curragh so long as they were back before an agreed time.

While British soldiers chose to use that system to their advantage by traveling across the border to Northern Ireland, there was no point in German prisoners doing the same considering they had nowhere to go.

Consequently, Arthur Voigt found himself talking to his future wife at a race meeting in the Curragh as war raged around Europe.

Arthur and his future wife Sheila enjoyed a whirlwind romance, spending summer days swimming in the River Liffey or cycling to hurling matches at Croke Park while spending their summer nights at dances in Newbridge.

In a bizarre twist of faith, Voigt's former radio operator Rudi Hengst began dating Sheila's sister Mona at the same time. The couple would also end up married, but neither romance was straightforward. 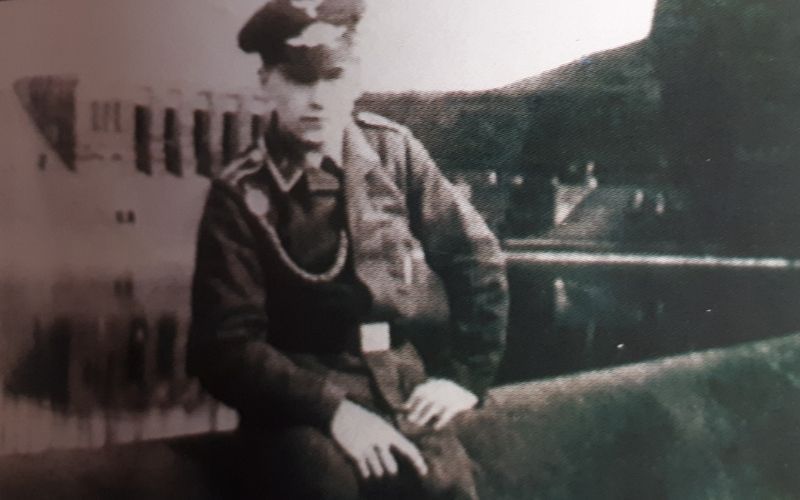 American victory in Japan brought about the end of the Second World War and the repatriation of prisoners of war all over the world.

For the German soldiers who spent the tail-end of the war in the comfortable surroundings of the Curragh, the end of the war meant a return to a country that had been devastated by bombings throughout. For Voigt and Hengst, it meant deportation to East Germany, which was now under the unforgiving control of the Soviets.

Voigt returned to Germany to live with his mother in the city of Leipzig, which had been severely damaged by Allied air raids throughout the war. From spending the "best four years of his life" in Ireland with the love of his life, Voigt now feared being ordered to work in a Soviet salt mine.

Sometime after his return to Germany, Voigt received a letter from the East German authorities ordering him to work in a salt mine. His friends advised him to ignore the letter until the authorities sent a follow-up, which subsequently arrived in 1949.

Voigt was faced with a decision; either stay and face the grueling work of a Soviet salt mine or attempt to flee to West Germany. Voigt chose the latter.

The former Luftwaffe bombardier trekked from Leipzig to the West German border where he was faced with a tributary of the River Eider.

Being a strong swimmer, Voigt undressed and rolled his clothes into a ball before swimming across the wide river one-handed while his other hand clutched his rolled-up clothes.

Like something out of a movie, Russian soldiers had noticed his daring escape, however, and sent a volley of bullets after him as he made his way across the river. Fortunately, none of the Russian soldiers found their target and Voigt was able to climb to safety on the opposite bank.

Voigt spent several years in West Germany thereafter while he attempted to secure refugee status in Ireland. He finally returned to Ireland in 1952 thanks to the help of Frank Aiken, Ireland's Minister for Foreign Affairs.

From then on, Voigt's life was far less eventful - a welcome change for a soldier who had seen too much of war.

He joined Bord na Móna as an electrician and married his Irish sweetheart Sheila, with who he had two children, and lived out the rest of his days in Newbridge, not too far from where he had the time of his life in the Curragh.

Today, Arthur Voigt Jr. regularly visits the German Military Cemetery in Glencree to pay respects to Gerd Rister, the German mechanic who perished on the bombing run that inadvertently sent his father to a new life in Ireland.

"He'd be 100 years old now if he was alive, so I'm sure that any relations he has now would be distant at this stage," Voigt Jr. told IrishCentral. "I just feel slightly honor-bound to go and pay my respects." 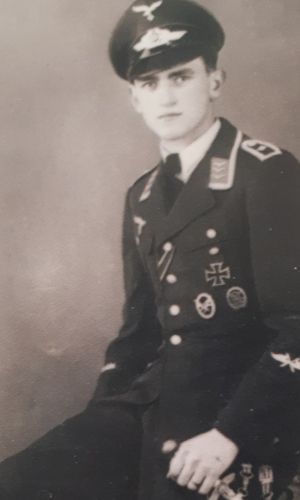 Voigt Jr. said that his father returned to Ireland with a dream of owning a house and raising a family with Sheila and that he shied away from his wartime activities until the later years of his life, avoiding calls from friends back in Germany who invited him to attend annual gatherings.

"It was only in his later years that he started going back to Germany for an annual reunion of Luftwaffe pilots. He wanted nothing to do with it," Voigt Jr. said of his father.

At the behest of his wife, Voigt finally agreed to return to Germany and enjoyed it so much that he returned every year until he was no longer able to.

Meanwhile, Voigt Jr. revealed that he traveled to Meyler's Millhouse in Wexford - the local pub where the four German airmen were briefly detained before being moved to more official quarters. There, the pub owner presented him with his father's flare gun that had been left behind on March 3, 1941 - the date that changed his life irreversibly.