The Irish Government installed 83 "Éire" signs on the Irish coast during WWII to let fighter pilots know that they were flying over neutral territory. 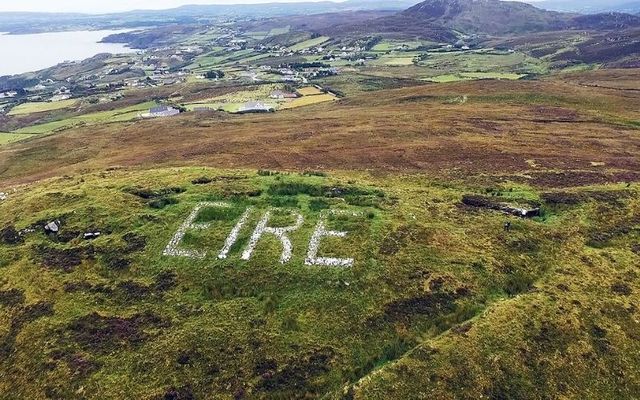 Restoration work began on an "Éire" sign installed at Howth Head almost 80 years ago during the Second World War to warn fighter pilots not to drop bombs on neutral Ireland.

Measuring 12 by six meters, the sign was one of 83 Éire signs installed on the Irish coast during the Second World War to warn fighter pilots that they were flying over Ireland. It will be the only Éire sign visible to passengers arriving at Dublin Airport once restoration work is completed at the end of the summer.

The signs are made up of stones painted in limewash and were installed along the Irish coastline after the deployment of US forces to Europe in January 1942, according to Howth-based historian Philip O'Connor.

"The Americans were coming into Britain and bringing their planes in for the bombing of Germany, and they had a lot of planes coming this way," O'Connor told the Irish Times in April 2021. "However, they couldn’t cross Ireland because of neutrality so they asked could the coastline be delineated because they were losing planes in crashes."

The Irish Government agreed to install the signs and later added numbers to each sign at the request of the American Army to help pilots navigate their way around the island of Ireland. The number six, for instance, was assigned to Howth Head to let American pilots know that they were flying over Howth.

However, fewer than 30 Éire signs remain intact, while just a handful are in a restored or visible condition.

O'Connor told the Irish Times that the signs became overgrown and forgotten about following the end of the Second World War.

In 2018, a gorse fire on Bray Head revealed an old Éire sign on the side of the cliff, while an Éire-7 sign in Dalkey was restored in 2019.

A Garda Air Support Unit crew spotted that the fire on Bray Head has revealed an “EIRE” sign dating from the Second World War.

We see these around the coastline but haven’t seen this before. pic.twitter.com/I6cwIrIori

These events inspired Howth residents to lobby the National Parks and Wildlife Service (NPWS) to restore the Éire-6 sign in Howth and the NPWS granted permission in February to the Éire-6 Restoration Group to uncover and preserve the sign.

The local Howth community will carry out the restoration work under the supervision of a plant ecologist and the work will involve removing gorse bush and replacing dislodged quartz stones.

The work is expected to be completed in August and the sign will be accessible from the summit car park at Howth Head, while passengers flying into Dublin Airport will also be able to spot the sign below them.