The German Military Cemetery in the small Wicklow village of Glencree contains the graves of 134 German soldiers and civilians who lost their lives on Irish soil during the First and Second World War and played an important role in Ireland and Germany's post-war relationship. 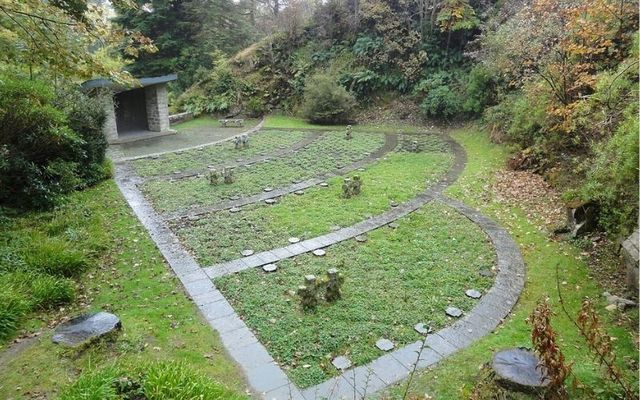 The German Military Cemetery in Glencree was visited by Charlie Chaplin in the 1960s during one of his many visits to Ireland. Wikimedia Commons/Frank Winkelmann

Tucked away in a quiet corner of the Wicklow Mountains is a German military cemetery and one of Ireland's true hidden gems.

The German War Cemetery in the small village of Glencree stands in honor of 134 German soldiers and civilians who lost their lives in Ireland during the First and Second World Wars.

Set in a beautiful space inside a disused quarry with the Glencree River roaring past on one side, the German War Cemetery is a bastion of serenity and tranquility. 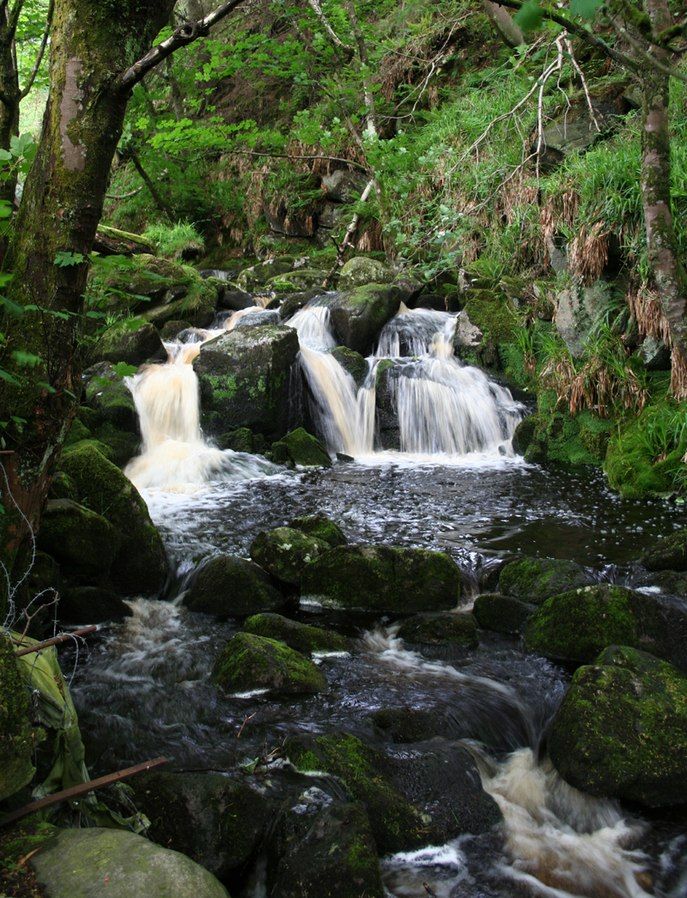 It is somewhat ironic that a place connected to the two most violent conflicts this planet has ever witnessed should be so peaceful and therapeutic, but that is exactly what Glencree stands for.

The small village has witnessed a long and storied history, first providing a home for a British Army barracks in the early 1800s as the British attempted to contain Irish rebels in the wake of the 1798 Rebellion. The barracks has since been repurposed as a reformatory for young boys in the aftermath of the Irish Famine and as a refugee center for German children following the bombing of Dresden in 1945.

More recently, the barracks at Glencree has served as a peace and reconciliation center for victims of the Troubles in Northern Ireland - a role it still performs to this day.

What better place, therefore, to pay homage to the German war dead than this tranquil village in the heart of the Wicklow Mountains?

Barbara Walshe, the chair of the Glencree Centre for Peace & Reconciliation, anecdotally said that the cemetery is a place that people frequently visit with their grandparents and it is easy to imagine why.

The German War Cemetery is steeped in natural beauty and overlooked by a large cross on top of a small cliff - paying a silent and poignant tribute to the small number of Germans who perished in Ireland during both World Wars.

Many of the cemetery's 91 German soldiers either washed up on Irish beaches or crash-landed after being shot down during the Second World War. Six graves at Glencree remember German soldiers who died in British prisoner-of-war camps in Ireland during the First World War.

Meanwhile, one grave belongs to Major Hermann Görtz - a German spy who liaised with the IRA over a potential Nazi occupation of Britain. Görtz evaded capture for 19 months before he was arrested by police in Dublin in November 1941. He was released at the end of the war but was re-arrested the following year and served with a deportation order.

Görtz killed himself out of fear of being handed over to the Soviets and his body was discreetly moved to Glencree in 1974.

The remaining 46 graves at the cemetery are devoted to German civilians who perished when the British passenger ship the SS Andorra Star was torpedoed by a German U-boat off Tory Island, County Donegal, in 1940.

The bodies were subsequently re-interred in Glencree after the cemetery opened in 1961 after the German War Graves Commission insisted that the cemetery was not exclusively designed for military personnel, but for all Germans who died on Irish soil as a result of either World War.

The cemetery played an important role in the post-war relationship between Germany and Ireland, according to German Ambassador to Ireland Deike Potzel.

Potzel, who has served as German Ambassador since 2017, encouraged Irish people to visit the cemetery, insisting that it wasn't exclusive to German people living in or visiting Ireland.

"It's such a beautiful surrounding that provides the calm that you need to reflect on certain issues. I think this a beautiful space to do that," Potzel told IrishCentral.

"This is a wonderful place. You can combine it with a lovely walk in a lovely surrounding, but you can also take a few minutes out of your normal schedule and reflect on the horrors of war. This a place where you can remember the victims of all the wars. For me, it is a special place." 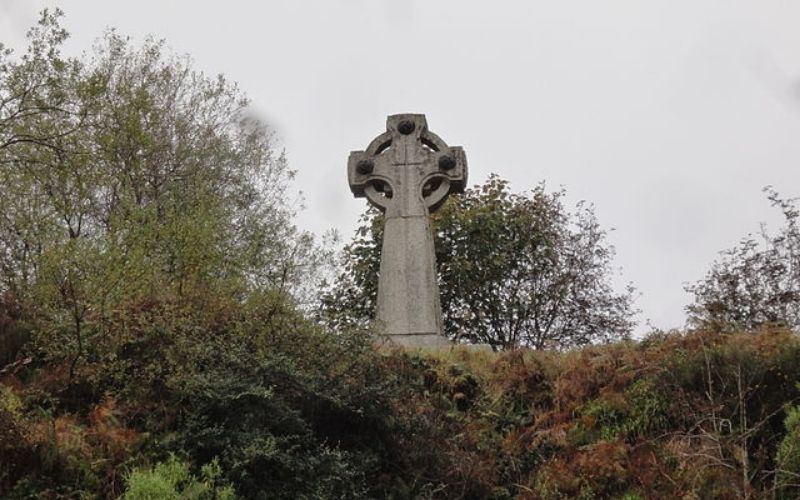 Prior to the outbreak of the COVID-19 pandemic, Potzel attended a series of commemorative events in Glencree every November to pay respect to all victims of war. The lengthy program featured a circle discussion with the French and Belgian Ambassadors to Ireland and also involved a "touching" service at the cemetery.

As German Ambassador, Potzel gave a speech at the remembrance service, while members of the Royal British Legion laid wreaths at the cemetery. Potzel was joined at the service by Ambassadors from France, Belgium, and Luxembourg each year and said that she was impressed by the large number of Irish people who traveled to Glencree to attend the ceremony.

"I thought it was a very moving ceremony and I was impressed that more than 200 people gathered there," she said.

"There were lots of people there - families bringing their children - so that was very nice." 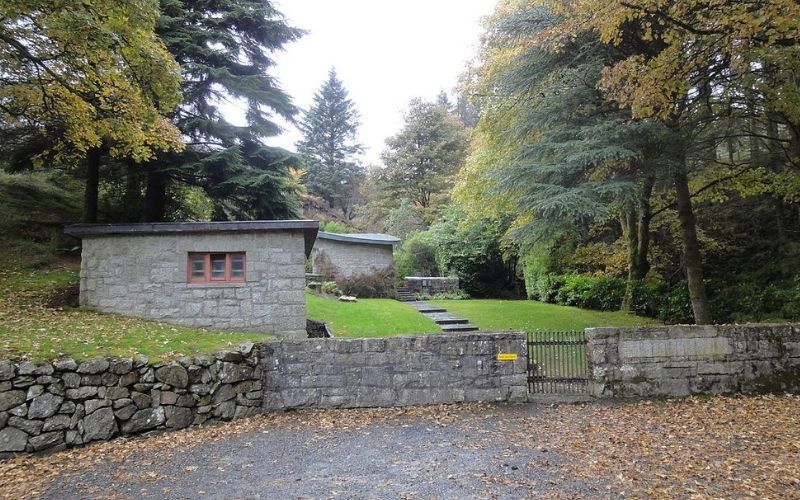 Clearly, the cemetery has proved to be an important relic for Germans connecting with their country's past, or for Irish people seeking solace and respite, but it very nearly wasn't built.

In 1952, the German War Graves Commission, in an attempt to produce a site where family members could go to grieve loved ones who died in Ireland, appealed to the Irish Government to provide a site where German soldiers could be re-interred.

The Irish Government was initially reluctant.

Thomas V. Commins of the Irish Government's External Affairs told the War Graves Commission that Ireland should, in no circumstances, "support, morally or materially, this idea of centralized burying places for the dead of any of the big powers".

Commins was also angered by a request from the War Graves Commission that the Irish Government should provide the site as a "free gift".

Plans for a cemetery to remember German soldiers in Ireland seemed dead in the water.

However, they were revived in 1954 when the German Legation sent a letter to External Affairs urging the Irish authorities to give consideration to a single cemetery for German war dead in Ireland.

After years of bureaucratic roadblocks, the plans were finally given the green light and the German War Graves Commission set about identifying an appropriate site.

They traveled to Glencree in 1958 and were initially disappointed by the site that the Office of Public Works had suggested until they stumbled upon a disused quarry draped in natural beauty.

The War Graves Commission frequently sought out sites of natural beauty in memorial ceremonies across Europe, but they were stunned by the unrivaled beauty of Glencree.

The site offered "a most beautiful approach with a most dignified enclosure" and the perfect way to remember their war dead.

The Commission's design for the cemetery was quickly approved and construction was soon underway. Silent film icon Charlie Chaplin paid a visit to the cemetery while it was under construction during a vacation in Ireland. Chaplin, who regularly holidayed in Ireland, visited his uncle who worked on the construction of the cemetery, according to information uncovered by Irish student Daniel McConnell as part of a school project.

The German Cemetery was opened to the public after a short and dignified ceremony in July 1961 that was attended by a small number of German and Irish officials. Irish poet Stan O'Brien, the President of the Ireland-German Society, attended the ceremony and composed a poem that was translated into Irish, German, and English and engraved into a stone structure at the cemetery.

Today, the cemetery represents just a small strand of Glencree's long history, drawing a small stream of visitors each year rather than a large flood, but that is what makes the cemetery altogether more appealing. An influx of large crowds would take away from what the cemetery offers - a quiet place for personal reflection and a reminder of the terrors of war.

So if you happen to be traveling in the Wicklow Mountains and come across this hidden gem, do yourself a favor and stop by. You won't regret it.