Albert Cashier, the woman who fought as a man for the Union

Born in Louth, Jennie Hodgers fought along with 400 other women dressed as a man in the American Civil War. 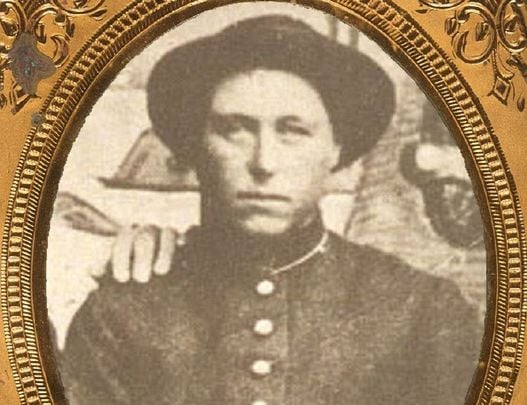 There are over 400 documented cases of women disguising themselves as men to fight for both the Union and the Confederacy. One of the most famous female soldiers of the American Civil War was Jennie Hodgers, who enlisted as Private Albert Cashier and was an Irish-born immigrant who served in the Union Army during the conflict.

The story of Cashier is one of the most notorious because Albert continued to live as a man long after the war and the secret was not discovered until just before her death. This nearly lifelong commitment to a male identity has led historians to now classify Cashier as a transgender man.

Not much is known of her early life as the only documented account of her life was given when she was suffering from dementia in 1913.

Jennie Hodgers left Ireland as a stowaway.  On her arrival in America, she eventually moved to Illinois where she had to pretend to be a boy to obtain employment in an all-male shoe factory. Albert Cashier was born.

Jenny now living as Albert finally settled in Belvidere Illinois and continued living as a man and worked as a laborer, farmhand, and shepherd for a farmer named Avery.

On Aug 6, 1862, Albert enlisted in the union army as private Albert D J Cashier in Company G of the 95th Illinois Infantry Regiment. Albert could not read or write so she marked an X on the enlistment papers and even passed a cursory physical examination.

Standing only 5 feet three inches tall Albert was undernourished and slight but this was not unusual for the time and many other Irish American soldiers were in similar shape.

Other soldiers noted that Albert kept her own company and preferred to bathe alone.

However, Cashier was accepted as “one of the boys” and considered to be a good soldier and excellent shot.

The 95th Illinois was part of the Army of Tennessee under General Ulysses S Grant.

Albert would participate in over 40 battles as the regiment traveled a total of 9,000 miles across the landscape of war.

In all the regiment marched 1,800 miles and was transported by riverboat and rail a further 8,200 miles.

In May 1863, Private Cashier participated in the Siege of Vicksburg, during which time she was captured while performing a reconnaissance mission. She escaped by wrestling a gun away from her Confederate jailer. Albert was pursued but managed to reach the safety of the Union lines.

After the Battle of Vicksburg, in June 1863, Cashier contracted chronic diarrhea and entered a military hospital, somehow managing to evade detection as a woman.

During the war, Albert corresponded by letter with the family of her old employer and they once asked her if she had bought a dress for her sweetheart.

In the spring of 1864, the regiment was also present at the Red River Campaign under General Nathaniel Banks, and in June 1864 at the Battle of Brice's Crossroads in Guntown, Mississippi, where they suffered heavy casualties.

During 1864, the 95th pursued Confederate General Sterling Price during his Missouri raid.

In December 1864, they fought at the Battle of Nashville, the last major battle in the Western Theatre. Sent to the Gulf of Mexico, the regiment ended its military service by taking part in the siege and capture of Spanish Fort and Fort Blakely in March 1865.

Cashier served a full three-year enlistment with her regiment until they were all mustered out on Aug 17, 1865 after losing a total of 289 soldiers to death and disease.

Even well after the war her comrades remembered the slight soldier as a brave fighter, admired for heroic actions, and undertaking dangerous assignments, yet never receiving a scratch.

Life as a man after the war

While Alberts war service is an astounding story her life afterward is even more intriguing.

The surviving men of the 95th returned home to Illinois and received a hero’s welcome.

Albert had escaped the war without serious injury, allowing her to keep her identity a secret. Albert returned to Belvedere continuing to live as a man.

In 1869 Cashier moved to Saunemin Illinois. There she worked as a farmhand as well as performing odd jobs around the town. and can be found in the town payroll records. Cashier lived with her employer Joshua Chesbro and his family in exchange for work.

In 1885, the Chesbro family had a small house built for Cashier. She continued her identity as a man and held many different jobs, including church janitor, cemetery worker, and street lamplighter. Cashier also voted in elections at a time when women did not have the right to vote.

Albert applied for a veteran’s pension in 1899 but didn’t complete the process until 1907, since it required a medical exam. Somehow, she convinced the examining board not to divulge her secret, and the pension was granted.

Despite a reputation for being an eccentric, Albert was well-liked and in later years took to having his meals with the neighboring Lannon family. The Lannons discovered their friend's sex when Cashier fell ill but decided not to make their discovery public.

Albert often carried out odd jobs for State Senator Ira Lish and in November of 1910, Cashier was hit by the Senator’s car and broke her leg.

Senator Lish claimed that he did not see Albert due to her slight frame.

Taken to the hospital her sex assigned at birth was discovered. Albert implored the Doctors to protect her long-held secret and they agreed to help her. It must be remembered this was a soldier with a pension who had voted in numerous elections. Had the secret been revealed, not only would the pension be revoked, but Albert would be charged with electoral fraud.

Albert never recovered fully from the accident, and within months, the Senator and her doctor agreed that she needed institutional care, because she was totally disabled.

On May 5, 1911, she was moved from Saunemin to the Soldiers’ and Sailors’ Home in Quincy, Illinois, where she was admitted as a man. While the staff was aware of Cashier's double life, they never broke their confidence.

Cashier remained a resident of the home until March of 1913, when due to the onset of dementia, he was sent to a State hospital for the Insane at East Moline, Illinois. This required a court hearing, and although her gender was not referred to at the hearing, word soon got out and the excited press broke the sensational story.

The US government then decided to charge Private Albert Cashier with defrauding the government to receive a pension.

An investigation was launched, but luckily her comrades from the 95th Illinois rallied and testified that this was not Jennie Hodgers but Albert Cashier, a small but brave soldier.

Man or woman, this soldier had indeed shown bravery on dangerous missions. In the end, Albert/Jennie was awarded veteran status and a pension for life.

However, at the hospital, she was forced to wear dresses for the first time in more than 50 years. She fought back for a long time before finally giving in.

Many of her former comrades, although initially surprised at the revelation of her long-held secret, were supportive of Cashier, and protested her treatment at the state hospital.

Albert was now 67 years old frail and in advanced stages of dementia she was unaccustomed to walking in women's clothing, one day she tripped and broke her hip.

Unfortunately, she never recovered from the injury and spent the rest of her life bedridden.

Albert Cashier died on October 10th, 1915. She was given an official Grand Army of the Republic funerary service in East Moline on October 12th and was buried with full military honors.

Albert wore her Union uniform, of which she was so proud with her casket draped with an American flag,

In the 1970s, a second tombstone, inscribed with both her names, was placed near the first one at Sunny Slope Cemetery in Saunemin, Illinois.

The people of Saunemin have not forgotten their brave soldiers of the Civil War. On Memorial Day, 1977, they erected a larger monument that bears the name Jennie Hodgers. Her name is also inscribed as Albert Cashier on the Illinois monument at Vicksburg.

What distinguishes Albert from most of the other women who fought in the American Civil War is that her secret was not discovered during the conflict.

Most other women were found out and ordered to go home or allowed to serve as nurses in field hospitals.

No matter if she is called Jennie Hodgers or by her chosen name for over 50 years, Albert Cashier, one thing is certain. She was a true patriot, an upright citizen, and a person loved and respected by those who touched her life.  May this brave Irish American soldier rest in peace.