In 1875 hired hitmen savagely murdered a pregnant Irish emigrant woman and her brother in vengeance against the Molly Maguires. 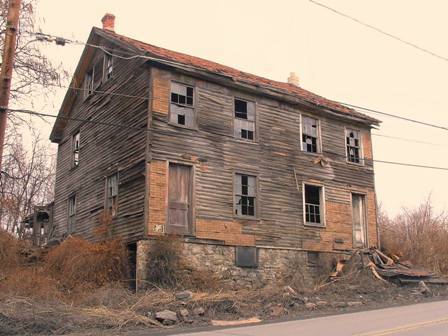 One of the most haunted places in the United States is the scene of a terrible murder of a heavily pregnant Irish emigrant and her brother at the hands of hired killers.

Early on the morning of Dec 10, 1875, 20 masked and armed men broke into the boarding house of elderly Irish immigrant Margaret O’Donnell, in Wiggins Patch, Schuylkill County, Pennsylvania. They were seeking vengeance against two alleged members of the Molly McGuire’s, Margaret’s sons, Charles and James.

In the space of 20 minutes, Margaret would find herself pistol-whipped, her son Charles riddled with bullets, another son James running for his life and her heavily pregnant daughter Ellen McAllister murdered, shot in the stomach as she came to the aid of her mother and brothers.

Margaret lived with her sons James and Charles and Ellen her 20-year-old daughter, Ellen’s infant son, and her husband, Charles McAllister.

It was a turbulent time in northeastern Pennsylvania with labor unrest in the anthracite coal mining region, where Irish immigrants toiled in dark and unsafe conditions.

The O’Donnell’s were caught up in this turmoil as Charles and James were suspected of being members of the Molly McGuires, a secret society of Irish immigrant coal miners accused of a series of killings and assaults throughout the coalfields.

Charles and James O’Donnell along with Ellen’s brother-in-law James McAllister were the chief suspects in the murder of mine boss Thomas Sanger and miner William Uren on Sept 1, 1875. This was widely known as having been conducted by the Molly Maguire’s in revenge for Sanger's perceived ill-treatment of mineworkers

While there was no concrete evidence linking the O’Donnell’s and McAllister to the murders, there was an obvious connection linking them to Molly Maguires. Margaret O’Donnell’s other daughter Mary Ann was married to Jack Kehoe an innkeeper who was widely known as the king of the Molly Maguire’s.

Throughout 1875, tit for tat violence had flowed back and forth from Molly Maguire sabotage to mine owners’ reprisals. It was in this unstable environment that 20-year-old Ellen McAllister awaited the birth of her 2nd child due on the 10th of December.

Read more: Ireland's most haunted house is up for sale

It was a cold night on December the 9th; Margaret O’Donnell was the last to go to bed.  Before she went upstairs, she laid down fire to keep the house warm and ensure her heavily pregnant daughter Ellen who was due to give birth the next day was warm and comfortable.

At about 1am in the morning Ellen McAllister was awakened by a loud noise. It was as if a hoard of people were marching over the lawn. Ellen asked her Husband Charles to investigate.

Suddenly the door of the boarding house was kicked in and around 20 well-armed and masked men flooded into the house banging on doors and firing their guns.

Charles O’Donnell was first to be dragged from his bed. A group of the insurgents surrounded him and riddled his body with as many as 18 bullets.

James O’Donnell jumped from a first-floor window and ran into the darkness escaping the chaos.

The masked men knew who they had come for and soon James McAllister was dragged outside, and a noose was wound around his neck. He was hung from a tree in the garden and left for dead.

Miraculously he played dead and then wriggled free and ran for help to assist the O’Donnell’s.

Ellen, her infant son, and Charles now barricaded in their room were fearing for their lives.

Thinking everyone else was dead, Charles McAllister fled out of a back window and bolted into the darkness, chased by some of the gunmen leaving his heavily pregnant wife and young son. Some would say this was cowardice, but Charles later claimed he was going for help for his family as he was sure that the masked men would not harm a child and a heavily pregnant woman.

This was sadly a naive assumption, as the mask men had already pistol-whipped Margaret O’Donnell and were showing no mercy to anyone they felt was connected to the O’Donnell’s or the Molly Maguire’s.

Ellen though frightened and protecting her young son could not bear the screams of her mother and left her room to plead with the assailants to stop. As she stood at the top of the stairs, several of the intruders turned and looked at her.

One man raised his pistol and fired. The bullet hit Ellen in the stomach. Her eyes rolled in shock as she realized what had happened. Soon other intruders began firing at her. According to a later account, Ellen’s right hand covered the blood pouring from her wound while her left hand was raised to deflect the hail of bullets.

“My baby, Oh dear God, my baby!" Ellen cried out, blood trickling from the corner of her mouth. She gasped, faltered, and clung to the stairs for a few seconds. But her strength quickly faded, and she crumpled to the floor.

One assailant was heard to admonish his compatriots:

“We don’t shoot women”, but it was too late for Ellen.

This shocked the gunmen into silence and seeing what they had done they ran out of the door.

Ellen McAllister and her unborn baby were the final lifeless victims of this callous attack.

News of the murders spread quickly and soon became known as the Wiggins Patch Massacre.

Ellen’s body and that of her brother Charles were taken to the nearby town of Tamaqua by train for an autopsy.

They were then packed in ice and stored overnight in the train station storage pens to await burial in St Jerome’s Cemetery.

The massacre shocked the region well used to violence between Molly Maguires and the mine owners.

While the police began searching for the murderer’s, numerous theories circulated as to the identity of the perpetrators of this heinous crime. The native Irish believed the ambush had been orchestrated by the Coal and Iron police or even the Pinkerton Detective agency as revenge for the murders of Thomas Sanger and William Uren.

Nobody was ever charged for the murders of Ellen McAllister, her baby, or her brother.

James O’Donnell fled to New York and in fear of his life changed his name and died in hiding.

Margaret recovered from her ordeal but not the heartache and for the rest of her life raised Ellen’s young son and moved in with her daughter Mary Ann Kehoe.

For Ellen, her baby, and Charles there was to be no justice. There were no trials. It also appears that for Ellen there was no eternal rest.

Many believe that her spirit roams Boston Run the modern-day site of Wiggins Patch.

Does she lament the death of her child which was due the very morning of her murder?

The Boarding house was demolished in November 2006 as it was becoming structurally dangerous.

Deborah Randall the Washington DC-based playwright visited the boarding house before it was knocked down as part of her research for her play about the Molly Maguire’s. She said:

“The pleas from the house are like a low moaning sensation as if she's saying, help me, help my baby.'"

Remnants of the foundation walls remain, and these have been investigated by members of the Pennsylvania Paranormal Research Team and declared haunted.

They did so because while investigating the site, members say they were approached by the spirit of what sounded like a little boy, who asked to go home with them.

Who was the little boy? Was he the spirit of Ellen's unborn child?

Or was the voice they claim to have heard that of Ellen herself?

Some believe the trauma of that fateful night in December 1875 has trapped Ellen's spirit at Wiggans Patch.

Others claim she pleads each night for the bullets to stop. I tend to think Ellen McAllister cries out for justice.

What is clear is that Ellen was an innocent woman who didn't deserve her gruesome death. May she and her child rest in peace.