Exploring the legend of the Molly Maguires

One of Findmypast’s recent journeys into historical news was to explore the legend of the “Molly Maguires." 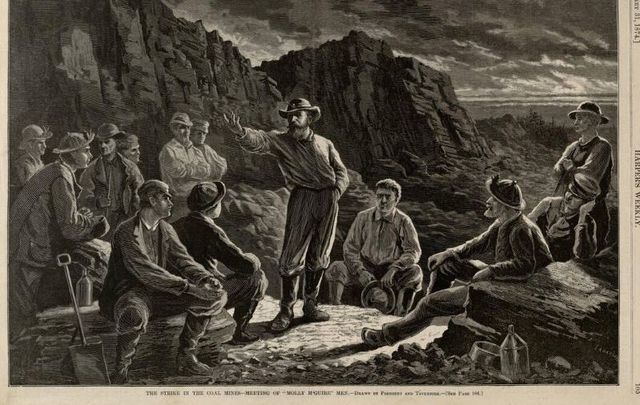 Newspapers can be an excellent resource for all of us engaged in our family history. We can learn so much valuable information from these pages, and it’s incredible to watch as more and more of these resources come online.

Editor's Note: This article was produced as part of a previous partnership between IrishCentral and Findmypast.

One of Findmypast’s recent journeys into historical news was to explore the story and legend of the “Molly Maguires.” The Mollies, as they were sometimes called, hold a piece of US history that eventually led to great change in the world of unions. They were known as a secret society and are mentioned throughout Findmypast’s Irish and British newspaper collections. What better way to find first-hand accounts of this organization than by reading the articles reporting their activities in “real-time?”

The Mollies originated much earlier than you might think. The name “Molly Maguire” was adopted in Ireland during the 1840s. An elderly woman, reportedly named Molly Maguire, was turned out of her rental home by an unfriendly landlord, and left to struggle to survive with no shelter; or so the story goes.

For years, notices were left on doors of landlords with threats should they dare to treat their tenants in the same fashion – notes that were signed “Molly Maguire.” It remains unknown if this elderly woman ever actually existed.

This was more organized than just random notes, however. In the July 16, 1845 issue of the Eddowes’s Journal, the General Advertiser for Shropshire, and the Principality of Wales, a lengthy address was reprinted from the Freeman’s Journal, in which the rules of Maguerism were outlined.

1. Keep strictly to the land question, by allowing no landlord more than fair value for his ‘tenour.’

5. No turning out of tenants, unless two years’ rent due before ejectment served …

11. For my sake, then, no distinction to any man on account of his religion, his acts alone you are to look to.

The “rules” were signed, “your affectionate mother, Molly Maguire.”

As the Irish flooded America and went to work, the Mollies found a home in the coal mines of Pennsylvania. The working conditions were less than ideal, and as the employees started to unite for a higher quality environment, many claim the Mollies were secretly formed to continue the fight. Accused of violent acts, murder, subterfuge, and generally disrupting mine operations, eventually, twenty suspected members were convicted of murder and other crimes and were executed.

Were they heroes or villains?

Just as you might suspect, the results are mixed. Local opinion swayed with who owned the newspaper and the current conditions in that area … but papers around the world reported on the atrocities the Mollies were accused of.

What more is there to learn of the Molly Maguires and their place in not only American, but Irish history? There are thousands of results in the Findmypast newspaper collections to be reviewed – and so the story will continue to unfold.

Read more: Molly Maguires: remembering one of the biggest federal executions in US history this day in 1877