The results in the recent elections in Northern Ireland shattered unionist hegemony because Sinn Féin easily outpolled their main rivals. 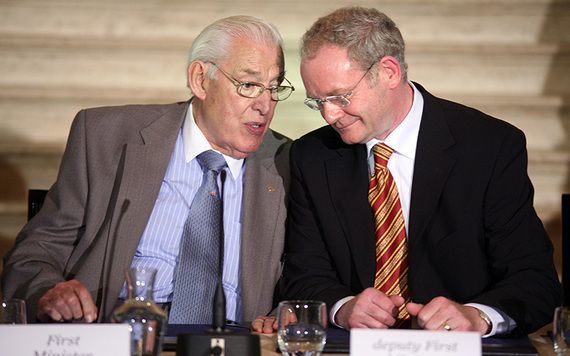 One hundred and two years ago, James Craig, the first prime minister in the new statelet in Belfast, proclaimed that his Parliament was designed to have a Protestant majority “in perpetuity.”

The results in the recent elections in Northern Ireland shattered unionist hegemony because Sinn Féin easily outpolled their main rivals, the Democratic Unionist Party (DUP), by about 65,000 votes, giving them the most seats in Parliament.

Symbols play an important role in life in Northern Ireland which was set up as a sectarian statelet. For instance, the mention of 1690 and the Battle of the Boyne to loyalists or 1916 and the Easter Rising to nationalists is likely to elicit a powerful emotional response suffused with pride and visions of past glory.

The results of the recent elections there may well have little impact on everyday life in the province. However, at the symbolic level, it would be hard to overestimate their significance.

The Sinn Féin leader in the North, Michelle O’Neill, qualifies for election to the post of First Minister in a new government in Stormont. Considering the history of deep divisions in the province, this represents a seismic shift and it is seen that way in both communities.

The DUP fared poorly in various opinion polls in recent times and showed signs of disarray by changing leaders three times in as many months last year. Their rallying cry throughout the election campaign claimed that only they could stop their hated opponents, Sinn Féin, from achieving a major triumph.

O’Neill is ready for her new job as First Minister, but the 1998 Belfast Agreement mandates that to achieve cross-community legitimacy, the post of Deputy First Minister has to be filled by a representative from the other community, which now falls to the DUP. Both positions have equal power, but the First Minister title has a definite cachet, indicating a higher notch in the symbolic power structure.

For the unionist community to accept what is perceived as a subsidiary place at the cabinet table next to the political party that supported the IRA during The Troubles meets the powerful metaphorical image of eating crow. In a previous executive in Stormont, back in 2007, Ian Paisley on the loyalist side served as First Minister with Martin McGuinness as his Deputy representing the nationalist-republican community. Both men are now in their graves, but they certainly provided a bright example of the way inter-communal cooperation could work.

They were seen regularly joking together and, by all accounts, not dwelling on their past histories. Never mind that Paisley was renowned as a harsh anti-papist preacher and McGuinness never hid his active role as an IRA commander.

The positive image of these two leaders sharing power in a congenial milieu was a major reason for the success of power-sharing in those years. The clear symbolic message to the population suggested that past differences need not preclude a spirit of good humor and compromise.

The DUP does not have a leader now willing to join O’Neill in moving ahead in a similar coalition government. Instead, Jeffrey Donaldson, the top man in the party, is tying his involvement in a new power-sharing Executive to getting major changes in the Brexit Protocol which was negotiated primarily to avoid a new land border between the Republic and Northern Ireland. As part of this treaty between Brussels and London, which was approved by the DUP, the Irish Sea was stipulated as replacing the land border.

One dimension of this agreement allowed the EU to operate checks on goods moving from mainland Britain to Northern Ireland because it adjoins the Irish republic. Importantly, it also gave business leaders in the six counties untrammeled access to the huge EU market, not available to other parts of the United Kingdom.

Donaldson and his colleagues reject any such checks on goods being moved from London to their country. They claim that it lessens their level of sovereignty by comparison with Scotland and Wales. And they say that their cooperation is contingent on the existing Protocol being radically changed to meet their concerns.

The symbolic message from 100 years ago that “Ulster Says No” is again a loyalist cry, except this time fewer unionists are as emotionally engaged in the protest, and now they are dealing with no-nonsense Brussels negotiators not compliant leaders in Westminster.

The DUP and the Traditional Unionist Voice (TUV) comprise around 30 percent of the northern electorate. Add in the Official Unionists (UUP) and some independents and you get around 40 percent of the votes cast. That same percentage applies to the combined vote of the nationalist parties – Sinn Féin, the Social Democratic and Labor Party (SDLP), and the tiny Aontú group.

Most of the remainder of the ballots cast went to the Alliance Party, an avowedly non-sectarian group that increased their vote by 4.5 percent to bring their support to an impressive 13.5%. This party does not take sides on the constitutional issue, so they are not for or against a united Ireland.

Alliance appeals especially to independent voters, to middle class, pro-European men and women mostly living in the suburbs. These voters are focused on everyday issues covering their children’s education and concerned about price increases in the supermarket and at the petrol pump. Above all, they oppose any return to sectarian violence which would ruin the community progress that has been achieved.

They draw significant support among Protestants and Catholics and see their party as representing normal politics. Undoubtedly, they can be seen as a new third force in Northern Ireland. For them, the symbols of The Troubles years must be set aside in favor of European politics that divide along left-right lines.

While all the parties in the south favor a united Ireland, only Sinn Féin is calling for a border poll. Their leader, Mary Lou McDonald, has spoken about her goal of referendums, north, and south, in a five to 10-year time frame.

In the Assembly elections, Sinn Féin focused on basic economic issues, the high cost of living, and the deterioration in health services. They talked about £300 million ready for spending once a new Executive is installed. O’Neill prodded the Dublin government to create the conditions for a discussion around constitutional change.

The TUV, a group with ties to loyalist paramilitaries, increased its vote by over five percent to 7.6 percent of the electorate, winning over 60,000 votes. Their leader, Jim Allister, stridently demands an end to the Protocol. No surrender!

Irish Foreign Minister Simon Coveney and Taoiseach Micheál Martin urge maximum flexibility to accommodate unionist concerns. This means that they favor differentiating between goods coming into Belfast that are not at risk of traveling south and items that stay in the north. A tricky challenge, but would that assuage unionist fears?

European negotiators, who have set a completion deadline of six months hence, assure the various sides in this dispute that they will be flexible within the confines of the signed Brexit agreement. President Biden’s State Department has warned publicly that unless the Good Friday Agreement is fully honored by Great Britain, they can forget about a trade deal with Washington.

British Prime Minister Boris Johnson, leader of the Brexit party that urged the fracture of Britain’s relationship with the European Union, is set to play a major part in the Protocol negotiations. Coveney claims that Johnson is not using his influence to show a workable way forward. Instead, Johnson seems to be affirming the hardline DUP position.

That is an ominous development, a symbol of past rhetoric that augurs poorly for progress this year.