Sinn Féin went toe to toe with the Democratic Unionist Party (DUP) for the position of First Minister and comfortably came out on top. 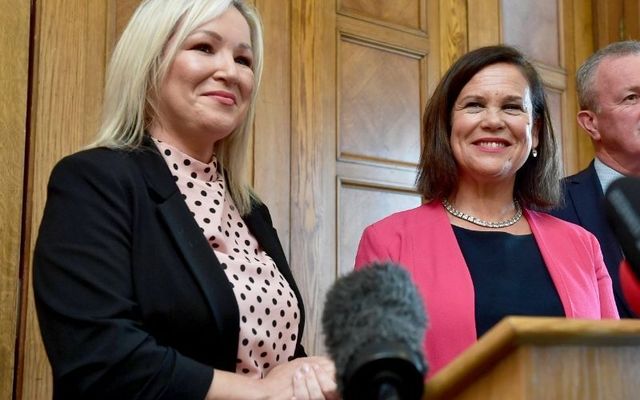 Sinn Féin’s spectacular performance in the Northern Ireland Assembly elections was the only story in town over the weekend.

In sweeping the board in nationalist areas, they steamrolled over their traditional and bitter rivals, the SDLP, leaving them bruised and battered in their wake.

The party went toe to toe with the Democratic Unionist Party (DUP) for the position of First Minister and comfortably came out on top. While they are the undoubted winners, they may have to wait a while for their prize as the DUP shows no signs of playing ball under the convoluted rules of the Northern Ireland Executive. Rules that require unionism to nominate a deputy first minister before Sinn Féin can claim the top job.

The significance of Sinn Féin’s victory depends on the prism that it is looked at through. For current-day republicans, this is their 1918 moment.

The election in that year saw the crushing defeat of moderate nationalism and gave Sinn Féin an overwhelming mandate to seek Irish independence. Many in their midst will see this week as the clear signal to push for a border poll and eventual reunification. Tiocfaidh ár lá, or our day will come, is morphing into the endgame strategy.

Having stayed quiet on the constitutional question of Northern Ireland during the campaign, the president of Sinn Féin, Mary Lou McDonald, made it clear in her first words following the results that a poll indeed is her party’s intent, and she demanded one before the end of the decade.

For the SDLP, last week’s results are a cruel reminder that in politics you cannot rest on your laurels. The days of John Hume and Seamus Mallon are well and truly gone, and their current leader Colum Eastwood, despite doing well in the TV debates, just did not connect with the electorate.

The party failed to counter the predictable Sinn Féin strategy of making the election about the position of First Minister. They knew it was coming with their sole representative in the House of Lords in London, Baroness Ritchie of Downpatrick, proposing an amendment to legislation in March of this year that would have created the positions of joint First Ministers. However, at the request of the British government, she withdrew her proposal.

Down to single figures in vote share and seats won, it’s hard to see how Eastwood can continue as leader given the extent of these losses. But the problem runs deeper than the election. The SDLP is beginning to look like a collection of individuals rather than a political movement with a coherent vision and strategy. Dark days ahead then for that party.

In relation to the DUP, there is a delicious irony in that they were finally tripped up through a clever wheeze they themselves suggested. During the St. Andrews renegotiation of the Good Friday Agreement, two options were being considered for electing the First Minister.

One was that the largest party from the largest designation would propose the holder of that office, i.e. the largest unionist party, as unionism had a greater number voting for them as against the total nationalist vote. The other was that it should be the largest party overall. Believing that this would give the DUP an ongoing advantage over their rivals in the Ulster Unionist Party (UUP), Peter Robinson, the DUP leader at the time, argued strongly for the latter option, in effect weaponizing the position.

Among his fiercest critics was Jim Allister, now leader of the hard-line Traditional Unionist Voice (TUV) who stated that the DUP had sold the unionist title deeds to the office of First Minister, saying it was “a most shameful escapade.” Well, Allister was right and the DUP was hoisted by its own petard.

For DUP leader Jeffrey Donaldson, there are some choices to be made. While it was a bad result in comparison with the election in 2017, his party just about surpassed expectations of a collapse last week, so he will be relieved.

He can’t walk back from his promise to the unionist electorate of not going into government without the EU Brexit Protocol being changed, and his decision on Monday not to nominate ministers was predictable. While weakened electorally, he still has cards to play, and a victory on the Protocol front would probably be good enough for his party to take up the position of deputy first minister.

Whether it is Donaldson who takes that position or someone else remains to be seen. In the meantime, in the absence of any changes on how the First Minister is decided, there are rumours of some within the DUP scoping out how a super unionist party might look to ensure that the titular and symbolic title will return to unionism.

The UUP are unlikely to be part of that gang. They had a poor election, losing two percent of its vote share compared to 2017 but lost only one seat.

The leader of the party Doug Beattie’s gamble of refusing to participate in anti-Protocol rallies was seen as foolhardy by some, rejecting traditional unionist street politics, but he has survived. No doubt he is looking enviously at the Alliance Party and their success in the polls as that party shares many common values with the UUP.

In terms of seats won last week, the Alliance Party are the big winners. With nine extra seats, they are the only party that increased their representation.

In doing so, they have taken a step towards their stated goal of “heralding the end of a political system based on the binary division of nationalism and unionism, green and orange.” But it will take more than one election result to change the nature and character of Northern Ireland politics.

For the Irish and U.K. governments, there is a long, well-traveled road ahead in trying to put together a Stormont government that will stand on its own feet. There is zero chance of this happening while the dispute over the Protocol continues.

For Taoiseach Micheál Martin, however, there is an additional question. Can he continue to ignore the call for a border poll? His policy of pushing the “Shared Island” agenda appears to be an effort to kill unionists and nationalists with kindness and money while remaining aloof from the constitutional fray.

Through a citizens assembly, hundreds of thousands of euro is being poured into the inconsequential question of a directly elected mayor for Dublin, while no work is being done on what a united Ireland might look like.

Martin needs to look over his shoulder, take stock and take action so that he is ahead of the curve on this issue. Coming up fast is the shadow not of a gunman, but of the ballot box. Following their Northern victory, Sinn Féin are on the move with their sights set firmly on power in Dublin.

*This column first appeared in the May 11 edition of the weekly Irish Voice newspaper, sister publication to IrishCentral. Michael O'Dowd is brothers to Niall O'Dowd, founder of the Irish Voice and IrishCentral.