As expected, Sinn Féin's vote surged in last week’s elections, and the party is now the largest in Northern Ireland. Also as expected, unionists are refusing to nominate a Deputy First Minister and continue to demand changes to the Brexit Protocol. 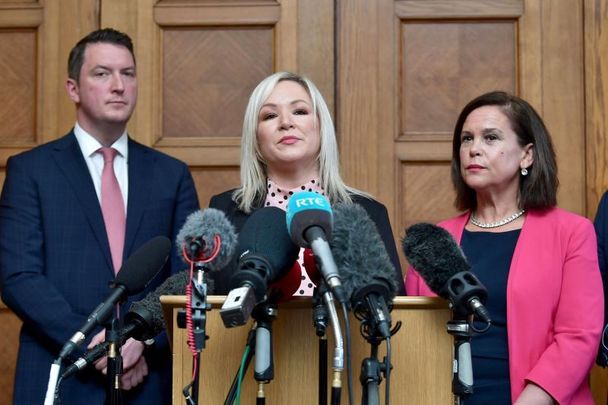 It didn’t take long for the defeated Democratic Unionist Party (DUP) to relapse into Ian Paisley’s best-known phrase when he founded the DUP.

“Not an inch” was the resounding echo in the nationalist community as DUP leader Sir Jeffrey Donaldson met Northern Ireland Secretary Brandon Lewis in Belfast on Monday.

The electorate had decided that for the first time since the North was founded as a separate state 101 years ago that nationalist Michelle O’Neill, vice president of Sinn Féin, would be head of its internal government as First Minister.

Of course, that was so long as the DUP accepted the role of Deputy First Minister, a situation that had equal authority. Under the North’s governing rules, one could not make a decision without the agreement of the other. However, the allocation of titles is regarded as symbolically important.

So, Donaldson told Lewis, the DUP would not be nominating a Deputy First Minister until there is “decisive action” on the Protocol which governs trade between Britain and Northern Ireland as part of the Brexit deal when Britain exited the EU.

Donaldson probably chose more diplomatic language in his talk with Lewis, but his decision which wrecked – for now – the prospect of Sinn Féin’s O’Neill becoming First Minister had echoes of early Paisley. “Not an inch” and “never, never, never” were all the nationalist community heard.

The Queen’s speech, which sets out the British government’s agenda for the next year and was delivered in Westminster on Tuesday by Prince Charles because of his mother’s frailty, did not mention the Protocol which effectively creates a trade border in the Irish Sea, an abhorrence to unionists.

But the Times of  London reported that British Foreign Secretary Liz Truss has concluded there is little point in trying to reach a Brexit deal with the EU and will move as soon as next week to scrap large parts of the Northern Ireland Protocol in British law.

If passed, her bill would override the Protocol agreed upon in 2019 and put the UK in breach of its obligations under the Brexit withdrawal agreement. Such a move could further incite the difficulty in forming an Executive to rule Northern Ireland.

It will be Friday of this week before the Stormont Assembly gathers, but it is likely to be a short session. Members will select a speaker and the next item is the selection of First Minister and Deputy First Minister, which will not happen.

With adjournment practically certain, the parties have a six-month gap before another election is held. Meanwhile, outgoing ministers will retain their portfolios with restrictions.

The parties are under immense pressure from the British and Irish governments to form a new power-sharing administration.

Lewis said the party leaders “must come together to agree a way forward to deliver a stable and accountable devolved government”.

Taoiseach Micheál Martin called for the restoration of the Stormont Executive as soon as possible, saying it is “incumbent” on the parties to do so.

O’Neill, the would-be First Minister, said the DUP and the UK government must respect the election’s outcome. She said it was down to British Prime Minister Boris Johnson and the EU to resolve differences over the Protocol.

She added, “Brinkmanship will not be tolerated where the north of Ireland becomes collateral damage in a game of chicken with the European Commission. Make no mistake, we and our business community here will not be held to ransom.”

O’Neill said, “Over 55 percent of Sinn Féin candidates elected are women. This is the first time in history for any party in the North. I’m extremely proud of all these women who have stepped forward to support workers and families as the cost of living rises and to fix our health service. Sinn Féin is driving forward real and positive change across Ireland.”

The middle-of-the-road Alliance was described by Tanaiste Leo Varadkar as the “big winners” in the election.