Unionist writ no longer runs like it used to in the North as Sir Jeffrey Donaldson will doubtless discover if he forces an election. 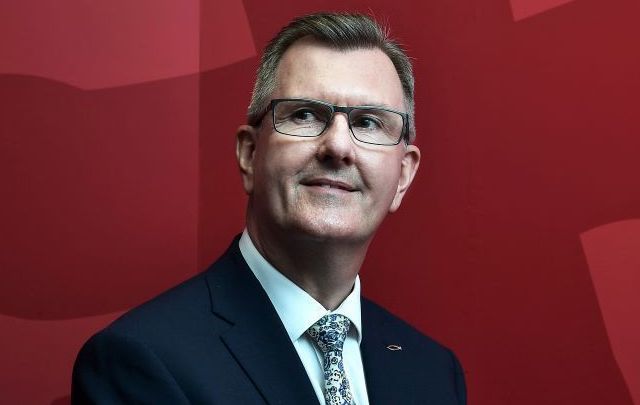 May 3, 2021: Sir Jeffrey Donaldson as he announces his bid to be the next Democratic Unionist Party leader (DUP) in Belfast, Northern Ireland. Getty Images

Many years ago at an Irish Embassy event in Washington, D.C. I found myself seated beside Jeffrey Donaldson, then the young rising star of unionism. Over dinner, we had a fascinating conversation.

He was openly critical of how hide bound and lost in the past the Ulster Unionist Party (UUP) was, and he had grand schemes to bring the party into the modern political world.

I was very impressed. At the time, both Ian Paisley, who ruled the roost on the unionist side, and the low-key UUP leader James Molyneaux both seemed trapped in a 1690 Battle of the Boyne bubble.

With such entrenched bigotry at the helm, it was refreshing, to say the least, to have the company of an up-and-coming unionist leader who appeared open to change and who presented a vision of modern unionism unafraid to engage with Irish nationalism.

The fact that he was even in the U.S. and talking and listening to Irish Americans was a feat in itself and a clear sign of more to come from a rejuvenated and modernized unionism … we thought.

I left the dinner very impressed, as were the people who were present. It seemed like a new voice of modern Northern Ireland was about to be heard.

Alas, nothing could have been further from the truth. Ulster unionism took a huge step forward by agreeing to the 1998 Good Friday Agreement as David Trimble, who replaced the sleepy Molyneaux, took a profound risk for peace and signed up to the Senator George Mitchell-brokered deal.

His biggest internal opponent in signing that deal was the fake moderate Donaldson who quit the UUP and became a bitter foe of the Agreement. Donaldson did his level best to sabotage the Agreement and as the years went by became more hardline rather than less.

He ended up in Ian Paisley’s Democratic Unionist Party (DUP) but was always a target of suspicion among those in the party who saw him as just an opportunist.

Donaldson had to lie low for many years but he remained the bitter prototype of most Northern Ireland unionists unwilling to ever give an inch to the other side.

Now with his party imploding following the botched removal of Arlene Foster, the former leader, and the firing in less than 30 days of her replacement Edwin Poots who had the temerity to strike a deal with Sinn Féin and the British government on the long-promised Irish Language Act, Donaldson is back in the limelight.

It seems certain he will be the next leader of the DUP, and the effort to kill off Brexit’s Northern Protocol will become his priority. The Brexit result in Northern Ireland was actually 56 percent opposed, but a little matter like that will not stop Sir Jeffrey from seeking to make the unionist voice the only one that matters.

Donaldson’s original threat was to collapse the devolved Northern Ireland Assembly which would result in new elections in the autumn. But his DUP would fare very badly by all accounts in those elections because of vicious internal feuding and a split as wide as the Lagan River.

Donaldson’s options are very limited but given his track record, I would believe it will be a variation on the unionist trope of their way or the highway. But Sir Jeffrey is in for a shock.

Unionist writ no longer runs like it used to in the North as he will doubtless discover if he forces an election.