Director Nick Hamm talks about the new film that tells the riveting story of the two men and their long road to peace and reconciliation. 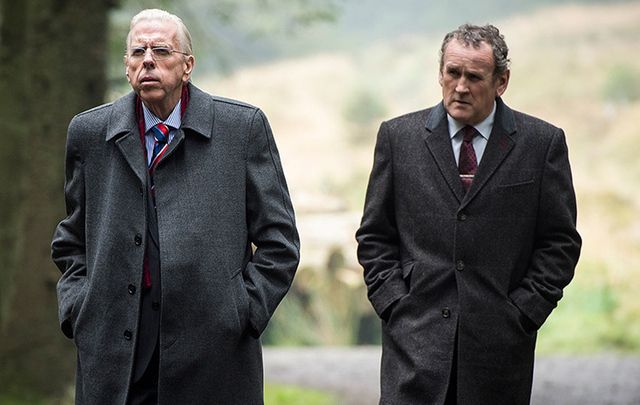 Timothy Spall and Colm Meaney in The Journey, as Ian Paisley and Martin McGuinness.

Ian Paisley and Martin McGuinness were community figureheads, even walking avatars, of The Troubles. But a friendship as unlikely as it was sincere somehow developed between the firebrand unionist and his implacable republican foe. Cahir O'Doherty talks to Nick Hamm, the director of "The Journey," the new film that tells the riveting story of the two men and their long road to peace and reconciliation.

Never was Ian Paisley’s go-to word.  It would come to define him. It was the word that he repeated three times in his most famous speech rejecting the Anglo-Irish Agreement signed by British Prime Minister Margaret Thatcher and Ireland's Garret FitzGerald in 1985.

But it was nonsense. He was leading from behind, playing to the unionist gallery. A month after he made the speech, which was the apotheosis of his long life in politics, he was privately exploring ways to break the political logjam he had himself created, including making the very unionist concessions that he had vowed he would never make.

In Co. Derry, which was as far away from Paisley politically at the time as the moon, Sinn Fein's Martin McGuinness had come to similar conclusions on the opposite side – that they could compromise or they could live in permanent conflict. There was no other ending.

The great challenge, as the riveting new film "The Journey" shows us, was to get these two implacably opposed leaders and their parties into the same room, and then to get them to talk and listen to each other. It was no small order.

Featuring career best performances from Colm Meaney as McGuinness and Timothy Spall as Paisley, one of the most bracing aspects of "The Journey," which opens June 16, is that it reminds us just how hard the two men worked to achieve a lasting peace, and just how easily it could have eluded them.

Director Nick Hamm, 59, who grew up in Northern Ireland, understood the high stakes and the two personalities involved better than most. “Who would ever imagine that the Northern Irish could teach the world about compromise?” he told our sister publication the Irish Voice.

That message is so important now, Hamm says. “It seems to me that we’re living in a political climate in Europe and America where intransigence and embattled ideas are in the driving seat, and ignoring other constituencies and beating the drum and shouting louder is the way political dialogue now happens. All that does is drown out sensible voices, because it's the loudest and the most aggressive that wins.”

What Hamm wanted to do with the film (which is still playing in Northern Ireland, five weeks after it opened) was imagine a situation where the artifice was taken away from two politicians. He wanted to put them in a private situation and then strip them of all their comforts, until they started to realize they have a lot in common.

Hamm knows both men and what they stood for with the insight of a local. In "The Journey," Paisley and McGuinness are portrayed with unusual impartiality, allowing us to assess their strengths and weaknesses.  (Paisley passed in 2014; McGuinness died in March of this year.)

Paisley’s religiosity and barely concealed messianic complex come to the fore at critical moments, as does the steel beneath McGuinness’s conviviality.

“Both men were very religious, both teetotal, both family men. They recognized in each other a real sense of kinship in the solid beliefs that they both held,” Hamm says.

Neither was in it for the money. Neither of them was lining his own pocket. Neither had a house in the Bahamas. Neither had offshore accounts. They were, in their own way, faith-based politicians and hardened militants who represented their cause.

“I met McGuinness in the Sinn Fein headquarters in the middle of Derry before I made the film. We talked for about two or three hours about his relationship with Paisley and how that grew over time,” Hamm recalled.

McGuinness told him about a crucial flight that he and Paisley had to take from Scotland to Northern Ireland (a security precaution for senior Northern Irish politicians meant they often flew on the same plane).

It was Paisley’s wedding anniversary and he was anxious to catch the last flight home to celebrate with his wife Eileen. Real enemies were becoming bedfellows on the same plane. They had to deal with this cheek by jowl. That was one of the first times the pair spoke, and before long they got along so well that they became known as the Chuckle Brothers.

“During the peace talks they didn’t speak to each other.  They didn’t even sit in the same room,” says Hamm. “On a plane, they had no choice about it.”

In the film, the two men are forced to travel to the airport together in the same town car, but Paisley doesn’t speak to McGuinness for the first 20 minutes.

“It’s like a boxing match. In round one it’s McGuinness. In round two it’s Paisley,” says Hamm. “We can see that Paisley doesn’t want to be there, but slowly McGuinness winds him up and gets him going and then he can’t resist.”

When the McGuinness family saw "The Journey" they liked it. Equally, when Ian Paisley Junior saw it he admired it and Spall’s performance as his father.

“That’s an almost impossible task in Northern Ireland. Just to get them to talk is difficult. Never mind agree about a movie,” Hamm laughs.

Sworn enemies who become loyal friends isn’t a story often told about The Troubles, especially when they have been figureheads for their respective tribes. But remarkably, that is what happened between Paisley and McGuinness.

“People want and are thirsty for some hope,” says Hamm. “Because it’s hard to achieve peace and it’s harder still to keep it.”

Now that we’re facing another election cycle in Northern Ireland, what are Hamm’s fears?

“If we go backwards now it will be a flat-out tragedy. There’s still a low level of violence from dissidents on both sides,” he says.

While making the film did he learn anything new about the two men it portrays? What were the surprises?

“How tenuous it all is,” Hamm replies. “How amazing it was that they did it and how easy it would be to lose. I’m from the Protestant community but I came out of it with huge admiration for both of them. As I found out about their characters, who they were, I realized just how far they had traveled.”

Read more: Maureen O’Hara’s screen debut to be aired in Ireland for the first time in 83 years