Ukrainians should march with the Irish in New York City this St. Patrick's Day to show solidarity as the invasion by the Russian forces continues. 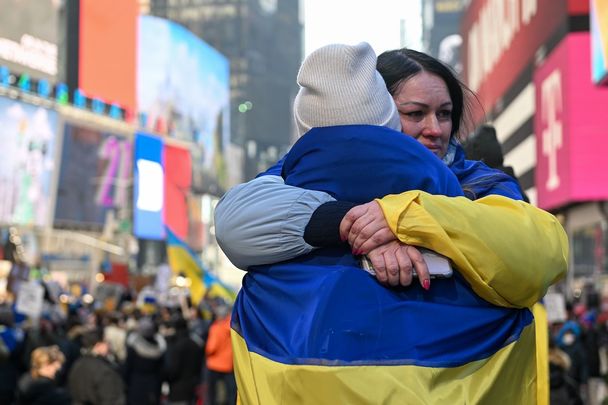 Two people hug, draped in Ukrainian flags, at the "Stand with Ukraine" rally at Times Square, on Feb 26, 2022. Getty

New York's St. Patrick's Day organizers should move to focus the world's attention on the bravery of the Ukrainian people taking on Putin's genocide efforts.

The New York City St. Patrick’s Day Parade is the largest in the free world and immensely influential in terms of media and attention.

Who will ever forget the incredible welcome the New York fire and police departments received after 9/11 when they marched the following year?

We doubt if more tears of gratitude and thanks were ever shed in any parade anywhere.

The current parade membership has taken many brave steps, most notably defusing the ban on LGBTQ marchers which had dogged the parade for decades. Under Chairman Sean Lane, the parade has proven it can avoid  becoming embroiled in poisonous politics,

Instead, he and his board has focused on creating an incredibly successful event that will surely draw record numbers this year after the Covid era.

There is another glorious moment beckoning the parade this year, at a time when the most murderous attack since Hitler’s Panzers launched their blitzkrieg across Europe in 1939 is happening.

Russia is matching those Hitler tactics in its attempt at genocide of the Ukrainian people whose only sin has been their wish to keep their democracy and decide for themselves what global alliances they can join or not join.

The Russian invasion has cast the entire world into a dark place and the only prevailing light is how the Ukrainian people, men, women, and children, will not go into the night and fade no matter what the Russians try to do to them.

This year, the New York City St. Patrick’s Day Parade can play an important role in highlighting the greatest battlefield human tragedy in Europe since Hitler and World War II. The world knows what is happening in Ukraine, where a brave nation is battling for its very survival as the Russian beasts seek to bomb it to Kingdom Come.

We have all seen the videos, especially the one of the family of three deliberately targeted and killed as they tried to flee to safety. The searing image of the mother, little boy, and girl lying fatally wounded. is a signature moment of the war.

Despite these horrific scenes, the Ukrainians fight on. Anyone with a drop of Irish blood will recognize this battlefield, a much greater power seeking to crush and intimidate a much smaller neighbor and bend them to their will.

The Irish fought it for eleven centuries and never gave in until most of the imperial forces departed leaving a rump in the North.  Looking at how ferociously Ukraine has responded to the Russian bear, it may take as many centuries but they are perfectly prepared for that.

What a glorious sight it would be to see Ukrainians marching up Fifth Avenue as part of the Irish parade, showing the solidarity of two countries raped, starved, pillaged, and murdered by their largest neighbor but still standing proudly.

It can happen, if the parade organizers decided to take one more courageous step and bring the focus of the world on to the bravery of a smaller nation living, fighting, and dying every day and night as the Russian hordes pile in.

What a powerful signal it would send to those fighting for their homeland that they do not fight alone and millions everywhere are in awe of their superpowers, fighting an army five times the size of their own and holding them at bay.

*This editorial first appeared in the March 9 edition of the weekly Irish Voice newspaper, sister publication to IrishCentral.