Russia is demanding a formal apology and compensation after Desmond Wisley reversed his truck through the gates of the Russian Embassy in Dublin on March 7. 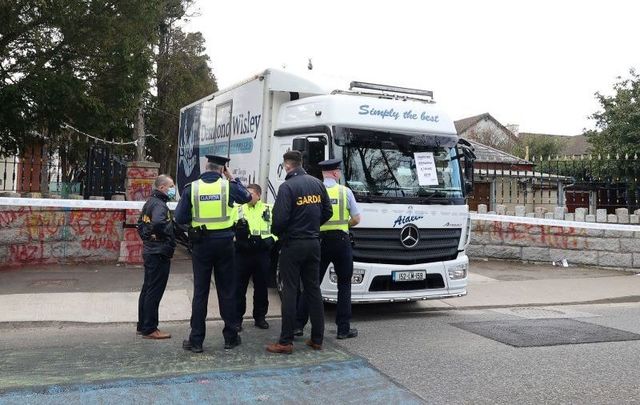 March 7, 2022: Gardai at the scene where a truck was reversed through the gates of the Russian Embassy in Dublin. Driver Desmond Wisley, from Co Leitrim, has been charged and released on bail for the incident. RollingNews.ie

Russia’s Ministry of Foreign Affairs said on Tuesday that Ireland’s Ambassador to Russia Brian McElduff had been summoned to Moscow in response to Monday’s incident where an Irish man, Desmond Wisley, reversed his truck through the gates of the Russian Embassy in Dublin.

Russia’s Ministry of Foreign Affairs accused the demonstrators who surrounded the Embassy in Dublin of adopting “tactics widely used by terrorists," according to a translation of Tuesday's statement.

The Ministry went on to demand an official apology from Irish leaders as well as full compensation for the damage. The Ministry further expects that Irish authorities “conduct an objective investigate” and “punish the perpetrators.”

On Monday, 49-year-old Desmond Wisley from Co Leitrim reversed his truck through the gates of the Russian Embassy on Orwell Road in Dublin. Footage of the incident was shared on social media.

Wisley was arrested but told the people at the scene "I've done my bit, lads."

Desmond Wisley has breached the gates of the Russian Embassy in #Dublin. He was overcome after seeing photos of the family killed in Irpin. pic.twitter.com/8SMbZIYxK0

"The incident took place in the presence of Garda officers, who stood idle.

“The Embassy strongly condemns this criminal act of insanity directed against peaceful diplomatic mission. The Embassy views this incident as a clear and blatant violation of Article 22 of the Vienna Convention on Diplomatic relations of 1961.

"The Embassy is in contact with the Department of Foreign Affairs of Ireland, demanding that the Irish authorities take comprehensive measure to ensure the safety of it’s staff and their family members.

“The incident is cause of extreme concern. We believe that no people of sound mind could support such senseless and barbaric actions.”

#Statement by the Embassy on the violation of its territory pic.twitter.com/AMCGKTzRsL

In a follow-up statement later in the day on Monday, the Russian Embassy said: “As a follow up to its earlier statement on the incident with the Embassy gate we would like to inform that additional measures have been undertaken by the Garda to ensure safety and security of the Embassy and its personnel. The Embassy appreciates cooperation by the Irish authorities on this matter."

An update by the Embassy on the truck incident pic.twitter.com/IzI8JHyvyx

Wisley appeared in court in Dublin on Tuesday where he was charged with dangerous driving and causing criminal damage. He was released on bail under the conditions that he stays away from the Russian Embassy and not make contact with its staff. He is due to appear in court again on April 26.

Leaving court on Tuesday, Wisley told reporters: "I did this to keep the pressure on Putin, to stop the war in Ukraine and especially the murder of innocent children."