Fr. Fergal MacDonagh, from the Dolphin's Barn parish in Dublin, threw the paint during a live interview with Irish radio show Liveline on Friday, stating that he was responding to news that Russia had bombed a maternity hospital in Ukraine. 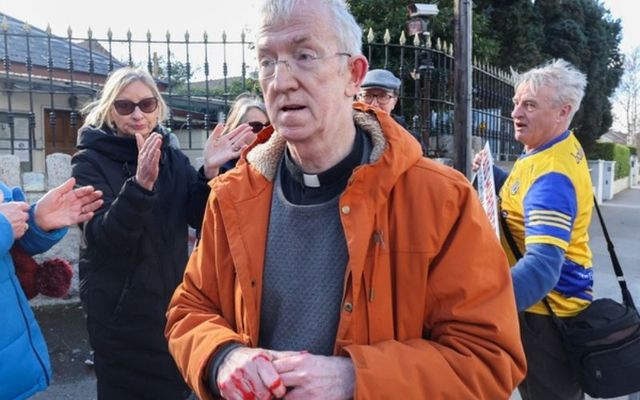 Fr. Fergal MacDonagh with red paint on his hands outside the Russian Embassy in Dublin. Rolling News

A Catholic priest has thrown red paint at the gates of the Russian Embassy in Dublin, stating that he ensured the paint had an oil base so that would be difficult to remove.

Fr. Fergal MacDonagh, from the Dolphin's Barn parish in Dublin, threw the paint during a live interview with Irish radio show Liveline on Friday.

"I’m about to throw paint at it. I won’t be the first and I won’t be the last. I’m going to do it now. I’m trying to not spill it," MacDonagh told Liveline host Joe Duffy, before going quiet for several seconds.

"I threw the empty tin of paint on the driveway," the priest said, returning to the interview.

He said he decided to douse the Embassy in paint after learning that Russia had bombed a maternity hospital.

"I am furious about what is happening. I live in a parish with a maternity hospital.

"They are bombing hospitals, schools, kindergartens, people’s homes and civilians are being murdered on the street."

The priest told Liveline that he was inspired by the Irish reaction to Bloody Sunday 50 years ago when a crowd of protesters burned down the British Embassy in Dublin.

He believes that the Irish public should consider a similar approach to the Russian Embassy in Rathgar.

"It needs to be an option while they are still here."

Dozens of Irish politicians have called for Russian Ambassador to Ireland Yury Filatov to be expelled since Russia launched a full-scale invasion of Ukraine on February 24.

Sinn Féin, the Labour Party, the Social Democrats, Aontú, and a significant number of Fianna Fáil and Fine Gael politicians have all called for Filatov's expulsion, while RTÉ News presenter David McCullagh challenged Filatov's position during a six-minute interview which has since gone viral.

Filatov told state-owned television station Russia 24 that he has faced "rough and really aggressive" protests since the invasion began.

"We are registering constant threats against employees of the embassy that we are receiving via email and phone calls," Filatov told Russia 24.

"For several days, there are protest manifestations next to the embassy, quite often very rough and violent, but of course, we are taking all safety precautions."

Crowds have gathered outside the Russian Embassy every day since February 24 to protest against the invasion of Ukraine, with some demonstrators throwing red paint on one of the gateposts on the first day of the invasion.

Protesters have since daubed graffiti on the walls of the embassy grounds, including slogans such as "blood on your hands" and "Nazis". They have also removed plaques from outside the embassy.

Fr, MacDonagh said he does not fear criminal damage charges for throwing paint on the Embassy gates.

"I hardly think a judge will send any Irish citizen to a prison term for throwing things at the building that represents a rogue state," he told Liveline.