Russia's Ambassador to Ireland Yury Filatov has accused the Irish of "taking sides" without doing any analysis of the situation. 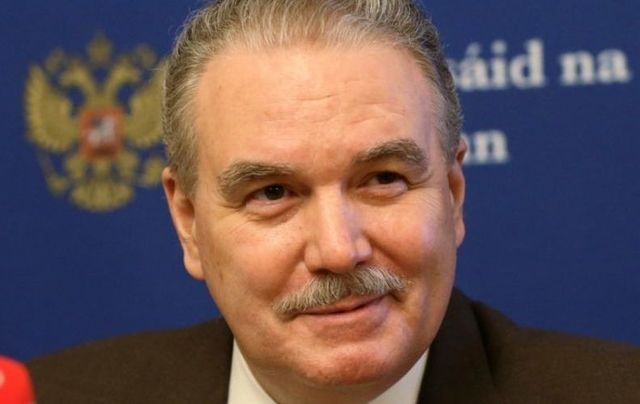 Russia's Ambassador to Ireland Yury Filatov has told Russia 24, a Russian state-owned outlet, that he has experienced "rough and really aggressive" protesters outside the Russian Embassy in Dublin.

Filatov's interview was shared on Russia 24's YouTube page, which cannot be accessed in Ireland, on March 3. According to The Irish Times, a copy of the interview was sent to Masha Vasilieva, a Russian citizen who has been living in Ireland for nine years, who translated it and posted it on her YouTube. Her translation has been verified.

At the time of publication, the nine-minute interview has been viewed more than 46,000 times on Russia 24's YouTube page.

Filatov said: “A very negative role, of course, is being played by mass media that shows absolutely tendentious picture of the events happening in Ukraine at the political level, but Ireland is in the forefront in the European Union and wider with regards to various anti-Russian events.

“In this regard, it is probably hardly possible to talk now about any relations between Russia and Ireland. We are mainly supporting a channel of communication with the Irish.

“There is probably a certain sense in this because even in these difficult periods there is need in them.”

Ambassador Filatov further said that the Russian Embassy in Rathmines is in “extreme tension."

“We are registering constant threats against employees of the embassy that we are receiving via email and phone calls.

“For several days, there are protest manifestations next to the embassy, quite often very rough and violent, but of course, we are taking all safety precautions.”

Crowds have gathered outside the Russian Embassy in Dublin every day since the Russian invasion of Ukraine began on February 24, with some demonstrators throwing red paint on one of the gateposts on the first day of the invasion.

Protesters have since daubed graffiti on the walls of the embassy grounds, including slogans such as "blood on your hands" and "Nazis". They have also removed plaques from outside the embassy. 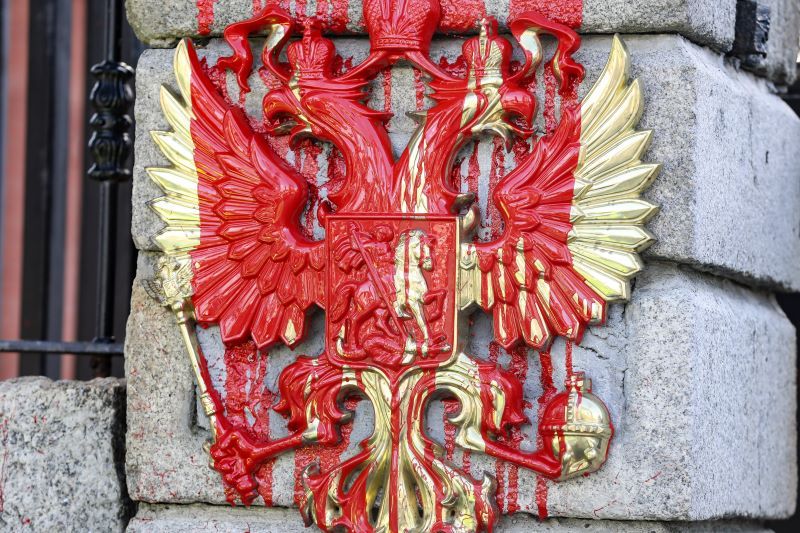 February 24, 2022: Red paint thrown across the the coat of arms of the Russian Federation on the gate outside the Russian Embassy in Dublin. (RollingNews.ie)

Filatov told Russia 24 that the vandalism had been reported to An Garda Síochána and claimed that Russians living in Ireland have received "reprisal threats" and been subjected to "bullying", although, as the Irish Times notes, there is currently no evidence to support or reject the claims.

"This is very sad because in general, in my opinion, the Irish are kind and responsive," Filatov said.

"But sometimes when they absolutely don’t understand the situation, they take sides without any analysis and they act based on it."