John Oliver responded to RTÉ journalist David McCullagh's takedown of Russian Ambassador Yuri Filatov saying, “That really didn't seem like a 'gotcha' question, but somehow, you just got got!" 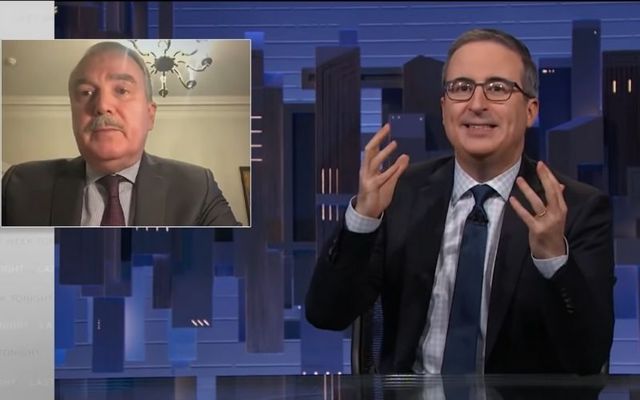 “You cannot make a case for what is happening and when you even try, as Russia’s Ambassador to Ireland did this week, you just sound ridiculous," Oliver said during the February 28 episode of his show.

He then cuts to the clip of McCullagh and Filatov on RTÉ's Six One News from last Friday that has since gone viral, being viewed on Twitter more than 6.4 million times.

McCullagh interjects: “But sir, your forces have invaded a sovereign nation, it absolutely was your choice.”

Filatov says: “Well it was not our preferable choice.”

McCullagh presses: "Why should our government entertain your presence here when you're acting as an apologist for slaughter?"

The Ambassador replies: "It's a good question. You might ask your government, it's up to them.”

Oliver, amazed, cuts back in: “Wow! He just asked you why Ireland should allow you to stay there as an ‘apologist for slaughter’ and you said ‘good question.’

“That really didn't seem like a 'gotcha' question, but somehow, you just got got!"

Oliver continued: "That's actually a pretty good reminder that Ireland, in addition to being known for eye-shatteringly beautiful meadows and free flowing sheep, is also known for taking zero s*** from occupying armies.

"Believe me," Oliver, a native of Birmingham, added emphatically, which was met with laughter from the audience.

Over the weekend, members of the Fine Gael parliamentary party began circulating a draft petition calling for the Ambassador's expulsion from Ireland, which had attracted signatures from 13 TDs, the Irish Times reports.

However, on Monday, Taoiseach Micheál Martin said: “We want to retain a capacity to help Irish citizens be it in Russia or be it elsewhere in Ukraine who may need assistance from us urgently.

"In times of conflict, it is important to keep (diplomatic) channels open and also to have very fresh and up-to-date insights about what is happening on the ground in given locations.”