Ireland is responding in concert with the EU after Russia began a large-scale military operation in Ukraine early today, February 24. 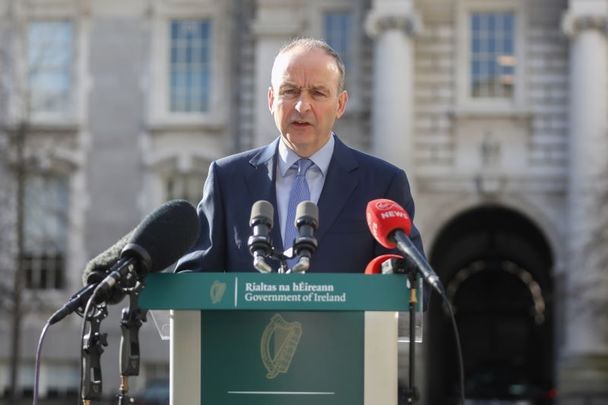 Ireland is set to waive visa requirements for Ukrainians, Taoiseach Micheál Martin confirmed on Thursday not long after Russia began its military operations in Ukraine early that morning.

"The Minister of Foreign Affairs and the Minister of Justice will meet in the next hour to operationalize the waiving of visa requirements for all Ukrainian citizens coming into Ireland," the Taoiseach said.

"We believe this will be particularly helpful to Ukrainian families here who may want their loved ones to join them.

“There will be a significant migration issue arising from these attacks, we will have to play our part in helping those who will have to flee Ukraine and we do that in solidarity with our European colleagues.”

Until now, Ireland was the only EU state which applied visa restrictions on Ukrainians, the Irish Times reports.

The Taoiseach traveled to Brussels later on Thursday where he told reporters that Ireland “will support the strongest possible sanctions.”

While the EU adopted a package of sanctions of February 23, officials are meeting tonight, February 24, to "move forward with a second, even more extensive sanctions package," Ireland's Department of Foreign Affairs said on Thursday evening.

When asked if Ireland would recognize a government installed by Russia, Martin said: “No way. Absolutely not. We support the democratically-elected government of Ukraine and we continue to do so.”

Ireland stands in solidarity with the Ukrainian people in their darkest hour.

We will support the imposition of comprehensive and severe sanctions on Russia.#Ukraine #EUCO pic.twitter.com/mBudOgqG99

Elsewhere on Thursday, Ireland's Minister for Foreign Affairs Simon Coveney told the Dáil that the Irish Embassy in Kyiv, the capital of Ukraine, has ceased operations.

"Our embassy is no longer operating in Kyiv and our staff and other staff are transferring to a safe place as we speak," Coveney said.

Any Irish citizen requiring emergency consular assistance should contact a dedicated telephone line, 01 6131700. Coveney said the Department of Foreign Affairs remains in contact with the approximately 70 Irish citizens in Ukraine who registered with the Embassy.

Coveney further said that he was working with the Minister for Justice Helen McEntee "to put a structure and system in place that will allow Ukrainian citizens in Ireland to bring their families from Ukraine to Ireland if they judge that is necessary for safety reasons. We will ensure that system works and is streamlined.

"Likewise, for Irish citizens who are in Ukraine who want to bring their families home with them, who may not be Irish nationals, we will also ensure that we have a process in place that will allow them to do that quickly and without impediments such as difficult visa application processes or anything like that. "

Ireland's Department of Foreign Affairs is today advising all Irish citizens in Ukraine to shelter in place, but to consider leaving if they deem it safe to do so.

All Irish citizens in Ukraine are advised to shelter in a secure place. However, citizens should consider leaving if they judge it safe to do sohttps://t.co/NJJACwWrL9