Ireland's Minister for European Affairs vowed to "support Ukraine" as sanctions begin to be imposed by the European Union against Russia. 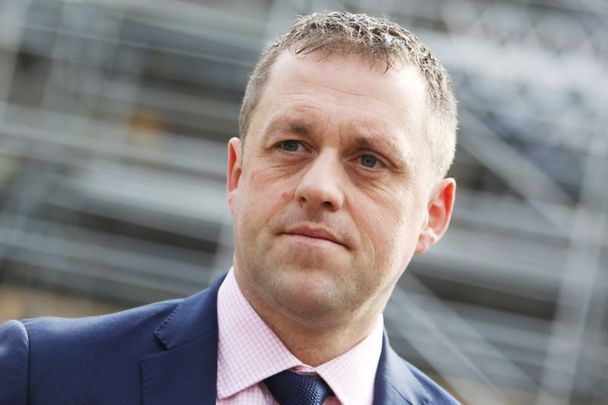 Ireland continues to speak out against Vladimir Putin's recognition of breakaway states in Ukraine.

“I think that we’ve got to ensure that whatever happens that Russia certainly feels the pain and that’s going to happen," TD Thomas Byrne, Ireland’s Minister for European Affairs, told reporters in Brussels on Tuesday morning.

On Monday, President of Russia Vladimir Putin moved to "recognize the independence and sovereignty" of two breakaway regions, Donetsk and Luhansk, in Ukraine against warnings from the West.

In recognizing the regions, Putin "paves the way for Russia to openly send troops and weapons to the long-running conflict pitting Ukrainian forces against Moscow-backed rebels," Al Jazeera reported on Monday.

Byrne continued on Tuesday: “What’s happened is a grotesque breach of international law, it’s a grotesque breach of the sovereignty of Ukraine, and that’s something that Ireland, as a democratic country, as our ambassador at the UN said last week, a right that we struggled to obtain in terms of directing our own foreign policy and our territorial integrity over many years and we will support Ukraine in that and we do that through the European Union working in collaboration with our American colleagues.”

Ireland, along with our EU partners, supports a clear and unequivocal response to Russia's violation of Ukraine’s sovereignty. pic.twitter.com/Ao3fOMwwqc

Later in the day on Tuesday, the EU confirmed that it will respond to Russia's breaches of international law with "additional restrictive measures, including on all economic relations with the non-governmental controlled areas, as well as designations against individuals and entities responsible for undermining the territorial integrity of Ukraine, in coordination with our partners."

Josep Borrell Fontelles, the Vice President of the European Commission, said on Twitter on Tuesday afternoon that the restrictions will target the "351 members of the Russian State Duma who voted for the recognition of the so-called LPR and DPR" as well as "27 individuals and entities who are undermining Ukraine’s territorial integrity, sovereignty and independence."

The sanctions are designed to target economic relations between the two breakaway regions and the EU, Borrell said, as well as the ability of the Russian state to access the EU's capital and financial markets.

Today, we agree by unanimity, to respond robustly to #Russia’s illegal actions against #Ukraine.

The EU sanctions package will hit

📍351 members of the Russian State Duma who voted for the recognition of the so-called LPR and DPR.

Elsewhere on Tuesday, Taoiseach Micheál Martin met with German Chancellor Olaf Scholz in Berlin. Martin said afterward: "The announcement by President Putin yesterday that Russia was recognizing the separatist regions in Ukraine crosses a line – it is a flagrant violation of international law and a breach of Ukraine’s sovereignty.

"It breaches the fundamental principles of the UN Charter, under which all members must refrain from the threat or use of force against the territorial integrity or political independence of any state.

"As I have said, together with our EU partners, Ireland stands in solidarity with Ukraine. The Chancellor and I discussed the EU’s response –which will be robust.

"I again, call on Russia to de-escalate, and to withdraw its military forces from the Ukrainian border.”

Taoiseach Micheál Martin said that the announcement by Vladimir Putin yesterday "crosses a line" and was "a flagrant violation of international law". He said that Ireland stands in solidarity with Ukraine, and that the EU's response will be "robust" | https://t.co/ZAcrKAYA3H pic.twitter.com/Vx1RQlxMXc