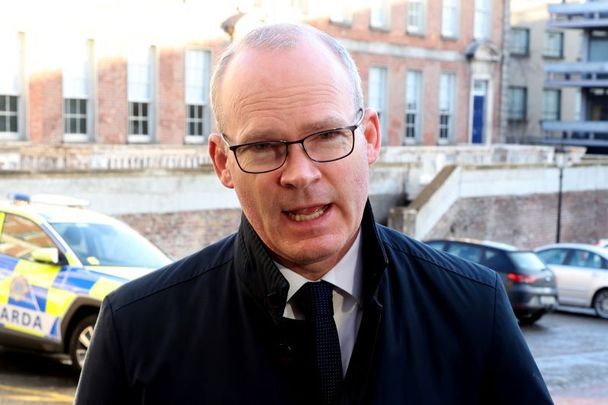 Ireland's Minister for Foreign Affairs Simon Coveney was unbending on Tuesday in his criticism of extra Russian forces moving into the Ukraine eastern breakaway regions of Donetsk and Luhansk.

Coveney said that it is time for the EU to introduce sanctions against Russia because of their military engagement in Ukraine. There was no way that the EU could ignore such a blatant breach of international law, he told RTÉ Radio’s Morning Ireland.

Coveney said Russia was trying to provide a “staged justification” for entering Ukraine by sending in what President Vladimir Putin called peacekeeping forces.

“And this idea that these are troops to be involved in peacekeeping functions really is nonsense,” Coveney said. “You don't send peacekeepers in tanks and attack helicopters."

He continued: “Unless Europe and the U.S. and the U.K. and others respond, I think firmly and clearly and in a united way, then I don’t think there will be a deterrent for Russia to stop there.

“This is of course a situation where we need to focus on diplomacy and a political dialogue to try and defuse tension and prevent the military conflict spiraling out of control.”

He referred to meetings in Brussels to determine the level of EU sanctions, but he acknowledged that a full package of sanctions would not be introduced unless there was a full invasion into Ukraine.

International law did not recognize the actions of Russian troops in moving into a part of Ukraine even if Putin recognized them as independent states.

He said there remained up to 70 Irish citizens in Ukraine, all of whom had been encouraged to leave in recent days, but some were married to Ukraine citizens, had families and considered Ukraine as their home.

Earlier, as Putin escalated the Ukraine crisis when on television, he said he recognized the breakaway regions of Donetsk and Luhansk. Coveney branded it as “a blatant violation” of Ukraine’s territorial integrity. He said Ireland’s support for Ukraine was “unwavering.”