Irish citizens in Ukraine are being urged to "leave immediately" by Ireland's Minister for Foreign Affairs. 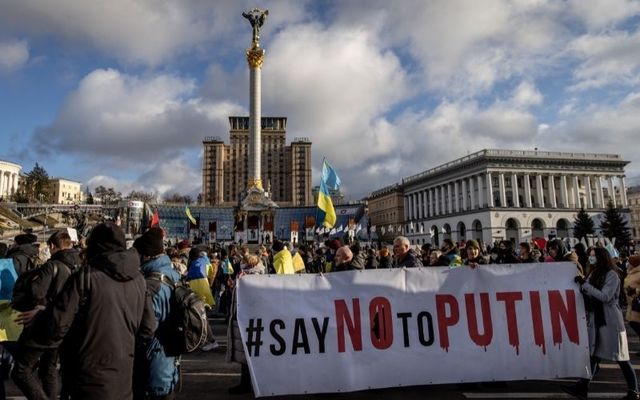 People participate in a Unity March to show solidarity and patriotic spirit over the escalating tensions with Russia on February 12, 2022 in Kyiv, Getty

Ireland's Department of Foreign Affairs has confirmed that 145 Irish citizens have registered with the Irish Embassy in Kyiv since Saturday when the Department updated its travel advice to encourage citizens to leave Ukraine "immediately by commercial means".

Minister for Foreign Affairs Simon Coveney again encouraged citizens to leave the country in a statement on Monday.

"We are urging all Irish citizens in Ukraine to leave immediately, either via commercial flight or overland," Coveny said.

He reaffirmed Ireland's commitment to Ukraine's territorial sovereignty and called on Russia to de-escalate and engage in constructive dialogue with the EU, the US, and the UK.

"Ireland supports all efforts aimed at defusing the current tensions and at finding a diplomatic pathway forward. Ireland is committed to Ukraine's territorial integrity and sovereignty. It is urgent that Russia de-escalate, abide by international law and engage constructively in dialogue."

The Department said the Irish Embassy in Kyiv will remain open with a small number of essential staff remaining. The situation will be kept under review, according to the Department statement.

Any Irish citizens requiring emergency consular assistance should contact the Department of Foreign Affairs at +353 1 4082000.

The Department also remains in direct contact with Irish citizens scheduled to travel to Ukraine for surrogacy purposes and will continue to provide advice and support to each of these individuals and their families.

Fine Gael Senator Mary Seery-Kearney said 14 surrogate babies were due to be born in the country between now and May.

Seery-Kearney said she had been liaising with the families, who were "devastated" by the thought of being separated from their newborn children over the coming weeks.

On Sunday morning, a Ryanair flight departed from Dublin Airport bound for Kyiv with the vast majority of the 131 passengers who booked tickets for the flight showing up for the journey.

Many of the passengers cited medical reasons for making the journey to Ukraine.

The Department's updated travel advice came after the Biden administration warned of an imminent Russian invasion of Ukraine.

The US State Department has stated that more than 100,000 Russian troops are now stationed on the Russian border, adding that an invasion could begin in days.

The State Department is encouraging all US citizens in Ukraine to depart the country "immediately", while all non-essential Embassy staff are also urged to leave.

The US also began suspending most consular services in Ukraine on Sunday, while US troops stationed in Kyiv were redeployed elsewhere in Europe.