The Irish Government had previously advised against all non-essential travel to Ukraine but has now updated the advice to reflect warnings from the Biden Administration that a Russian invasion could take place at any moment. 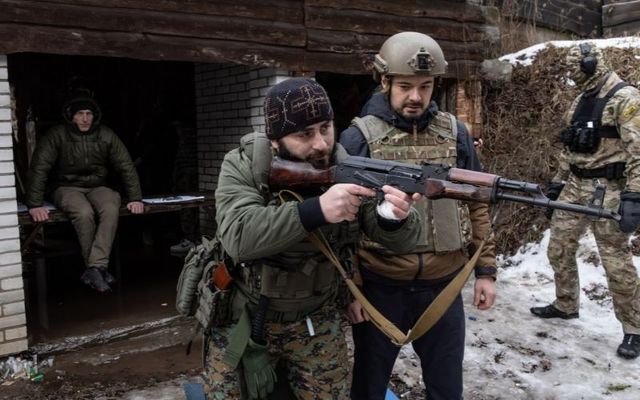 FEBRUARY 10: A member of the Georgian National Legion paramilitary volunteer unit (L) instructs a civilian on shooting techniques during a training course at a shooting range on February 10, 2022, in Kyiv, Ukraine. Getty

The Department of Foreign Affairs has advised Irish citizens to leave Ukraine immediately "by commercial means" amid reports that Russia could invade in days.

The Irish Government had previously advised against all non-essential travel to Ukraine but has now updated the advice to reflect warnings from the Biden Administration that a Russian invasion could take place at any moment.

The Department of Foreign Affairs announced the news in a statement on Saturday, stating that it updated the travel advice "following intensive consultations overnight and this morning with EU partners in Kyiv and Brussels, and with other partners".

"We advise against all travel to Ukraine and ask citizens currently in Ukraine to leave immediately by commercial means," the Department said in a statement.

The statement encouraged any Irish citizens requiring emergency consular assistance to contact the Department at +353 1 4082000.

A small number of essential staff will be remaining in the Irish Embassy in Kyiv, according to the statement, although the situation will be kept under review.

The Department has been in contact with Irish citizens who were due to travel to Ukraine for surrogacy programs.

Fine Gael Senator Mary Seery-Kearney said 14 surrogate babies were due to be born in the country between now and May.

The Department said it continues to offer advice and support for all parents affected by the updated travel advice.

Meanwhile, the US State Department announced on Friday that all Americans in Ukraine have been advised to leave the country over the next 48 hours.

Officials also said the United States is preparing to evacuate the US Embassy in Kyiv amid reports of an imminent Russian invasion.

President Joe Biden is due to discuss the situation with Russian President Vladimir Putin by phone on Saturday.

Biden has confirmed that the US will not enter a war in Ukraine but has promised severe economic sanctions if Russia goes ahead with the invasion.

The Pentagon has also deployed a further 3,000 US troops to Poland to reassure US allies.