Like the Irish, Ukraine will never forget the Stalin-created Famine

Even Ireland’s horrific great hunger could not match the Ukranian famine for pure evil. 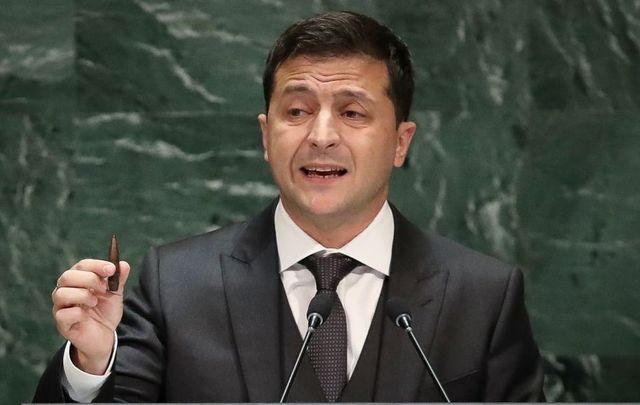 President of Ukraine Volodymyr Zelensky holds up a bullet as he addresses the United Nations General Assembly at UN headquarters on September 25, 2019, in New York City. Drew Angerer/Getty Images

The lack of knowledge Donald Trump displayed when suggesting that the new Ukranian leader sort out the situation with Russia by merely sitting down for a chat with Vladamir Putin was incredible.

Ukraine and Russia have battled each other since the 1700s and by far the most horrific act was the Stalin-ordered famine and genocide which took four million lives in the early 1930s.

Even Ireland’s horrific great hunger could not match the Ukranian famine for pure evil. If you think the British were callous, then consider Stalin’s orders to create a Famine so he could create huge collective farms and feed his Red Army as well as crush Ukranian nationalism. The British did not start the Famine, the potato blight caused it.

READ: The White House has released a memo of President Trump's July call with Ukrainian President Volodymyr Zelensky. (Note: It's not a verbatim transcript of the conversation.)https://t.co/059UyBExeg pic.twitter.com/zI7AECl3H7

“The Ukrainian famine was a clear case of a man-made famine,” Alex de Waal, executive director of the World Peace Foundation at Tufts University and author of the 2018 book “Mass Starvation: The History and Future of Famine,” told History.com.

He describes it as “a hybrid…of a famine caused by calamitous social-economic policies and one aimed at a particular population for repression or punishment.”

Putin has often claimed Stalin as his hero. I’m sure the Ukranian leader President Volodymyr Zelensky is fully aware of that fact when they sit down over coffee.

She writes that he also “arrested tens of thousands of Ukrainian teachers and intellectuals and removed Ukrainian-language books from schools and libraries, ordered local officials to stop using the Ukrainian language in their correspondence, and cracked down on Ukrainian cultural policies that had been developed in the 1920s.”

Read more: Why President Trump should be impeached

We've got the answers to your impeachment inquiry questions. pic.twitter.com/S61TPEsRWS

Sounds incredibly like the Irish Penal Laws to me.

When Stalin’s famine enforcers went out into the countryside, according to a 1988 U.S. Congressional commission report, they “used long wooden poles with metal points to poke the dirt floors of peasants’ homes and probe the ground around them, in case they’d buried stores of grain to avoid detection.”

In one case, according to the Congressional report, “two boys who were caught hiding fish and frogs they’d caught, for example, were taken to the village soviet, where they were beaten, and then dragged into a field with their hands tied and mouths and noses gagged, where they were left to suffocate.”

To this day, the Russian government that replaced the Soviet Union has denied it was genocide.

Donald Trump is clearly ignorant and uncaring about this history, seeking instead to enlist the Ukraine government in a plot to remove or damage his main rival in the 2020 election.

He has really gone beyond the pale on this one and it may cost him his re-election.