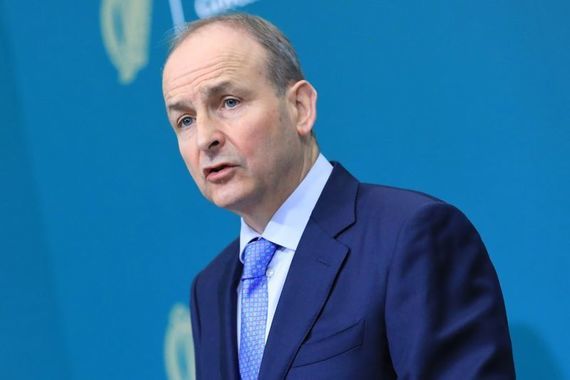 Taoiseach Micheál Martin has described Russia's full-scale invasion of Ukraine as "an outrageous and moral breach of the most fundamental principles of international law".

Within minutes of Putin's address, the Russian army launched ballistic and cruise missiles at infrastructure near major Ukrainian cities, including Kharkiv, Mariupol, Dnipro, and the capital Kyiv.

A senior adviser to Ukraine's interior ministry said Russian troops may soon arrive at Kharkiv, which is located around 20 miles from the Russian border.

The Taoiseach said that Ireland stands in solidarity with the people of Ukraine and added that Putin must be held accountable for the attack.

He called on the EU to impose tougher sanctions than ever on Russia in the wake of the attack, which he described as immoral, beyond comprehension and totally unjustifiable.

Minister for Foreign Affairs Simon Coveney said on Twitter that "our thoughts and prayers are with the innocent people of Ukraine".

"Russian leaders are lying to their own people to justify this illegal aggression. We utterly condemn Russia for this act of unjustifiable war in the heart of Europe," Coveney said on Twitter.

Our thoughts & prayers are with the innocent people of Ukraine, as families wake up to shocking Russian attacks. Russian leaders are lying to their own people to justify this illegal aggression.
We utterly condemn Russia for this act of unjustifiable war in the heart of Europe.

In a statement, the Department of Foreign Affairs advised any Irish citizens remaining in Ukraine to seek shelter.

The Guardian reports that locals in Kyiv sought safety in bomb shelters as large explosions were heard outside the city, while citizens also sheltered in the city's metro.

Ukrainian foreign minister Dmytro Kuleba said in a statement that Putin had launched a "full-scale invasion" of Ukraine.

"Peaceful Ukrainian cities are under strikes. This is a war of aggression. Ukraine will defend itself and will win. The world can and must stop Putin. The time to act is now," Kuleba said.

Putin justified the invasion by stating that "a hostile anti-Russia is being created on one of our lands".

He claimed the invasion was for a "demilitarization" and "denazification" of Ukraine, echoing a false propaganda claim made by the Kremlin that Ukraine's government is controlled by the far-right.

"We do not intend to occupy Ukraine," Putin said, adding that any nation considering interfering in the conflict from the outside "will face consequences greater than any you have faced in history".

US President Joe Biden said in a statement that the "prayers of the entire world" are with the people of Ukraine following "an unprovoked and unjustified attack by Russian military forces".

"President Putin has chosen a premeditated war that will bring a catastrophic loss of life and human suffering," Biden said.

"Russia alone is responsible for the death and destruction this attack will bring, and the United States and its allies and partners will respond in a united and decisive way. The world will hold Russia accountable."

A total of 40 people have been reported dead following the attack, according to reports, while Russia claims to have successfully disabled all Ukrainian aviation bases following the barrage of missiles.

It also claimed that Russian troops had been able to enter Ukraine without any resistance from Ukraine's border forces.

Russia had previously launched a massive cyberattack on Ukraine, targeting ministries and banks in a bid to create confusion.