"I've done my bit lads," the driver reportedly told gardai after reversing his truck through the gates of the Russian Embassy of Dublin on Monday. 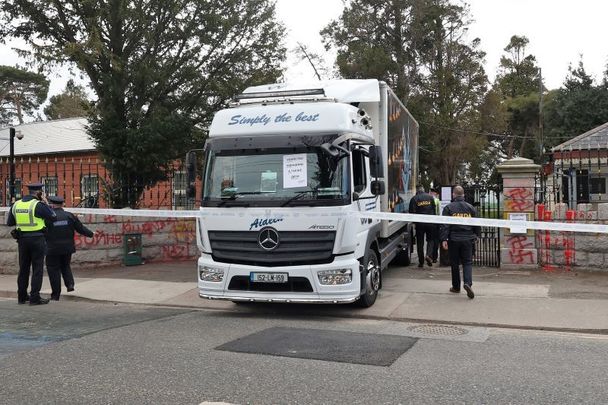 March 7, 2022: Gardai at the scene after a truck was reversed through the gates of the Russian Embassy in Dublin RollingNews.ie

A man has been arrested after reversing a communion supply truck through the gates of the Russian Embassy in Dublin on Monday afternoon.

Gardaí have confirmed that they are investigating an incident of criminal damage at the property, while roads around the Embassy have been closed.

No one was injured during the incident, according to an RTÉ reporter present at the scene.

A short video circulating on Twitter shows the truck through the closed gates and knocking them to the ground.

A large truck has crashed through the gates of the Russian embassy in south Dublin. One man has been arrested. pic.twitter.com/35yLDfGhEd

Another longer video shows people saying "well done" and "bravo" as the truck is driven through the gates.

The driver, who identified himself as Desmond Wisley and acknowledged that he was about to be arrested, told the people at the scene "in Ireland, we like justice."

Desmond Wisley has breached the gates of the Russian Embassy in #Dublin. He was overcome after seeing photos of the family killed in Irpin. pic.twitter.com/8SMbZIYxK0

An advertisement on the side of the vehicle revealed that it was an "ecclesiastical supplies" truck.

"I've done my bit lads. It's about time the rest of Ireland done their bit," the driver said as he was led away by gardaí, according to a report in the Irish Times.

The Russian Embassy has claimed that Garda officers "stood idle" as the truck crashed into the gates and accused Ireland of breaching the Vienna Convention by not protecting the premises from damage. Article 22 of the Vienna Convention stipulates that host countries must take "all appropriate steps to protect the premises of the [other country’s] mission against any intrusion or damage".

A Russian Embassy spokesperson said in a statement that the Embassy is in contact with the Irish Department of Foreign Affairs to demand that "comprehensive measures" are put in place to protect its staff.

The embassy described Monday's incident as an "act of criminal insanity".

#Statement by the Embassy on the violation of its territory pic.twitter.com/AMCGKTzRsL

The Russian Embassy has been the target of several protests since the Russian invasion of Ukraine began on February 24.

Protesters have daubed graffiti on the walls of the Embassy grounds, including captions such as "Nazis" and "blood on your hands".

They have also removed plaques from the walls and smeared paint and thrown red paint over the gateposts.

On Friday, a Catholic priest threw red paint over the Embassy gates during a live interview with RTÉ's Liveline.

"I’m about to throw paint at it. I won’t be the first and I won’t be the last. I’m going to do it now. I’m trying to not spill it," Fr. Fergal MacDonagh from the Dolphin's Barn parish in Dublin told Liveline host Joe Duffy.

Hundreds of protesters gathered outside the Embassy on Sunday to protest against the war in Ukraine.

A group of 800 people marched from the Ukrainian Embassy in Ballsbridge to the Russian Embassy in Rathgar as part of a peaceful protest against the war, according to DublinLive.

Russian Ambassador to Ireland Yury Filatov told state television station Russia 24 that Ireland has been at the "forefront" of anti-Russian activities in Europe since the invasion began.

Filatov claimed that staff at the Russian Embassy had been subjected to threats during "rough and really aggressive" protests.

Dozens of Irish politicians have called for Filatov to be expelled.