Hitler's secret plans for Nazis to invade Ireland sells at auction for $1.3k

The Nazi intelligence handbook sold at an auction hosted by Purcell Auctioneers for €1,100 ($1,300) and features a detailed military study of the geographical landscape of the west of Ireland. 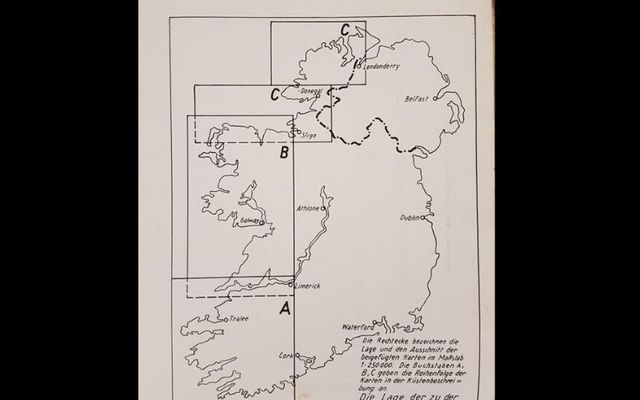 A map of Ireland completed by the German military in advance of a potential invasion. Purcell Auctioneers

A rare copy of Adolf Hitler's plans to invade Ireland during the Second World War has sold at an auction for more than €1,000.

The Nazi intelligence handbook sold at an auction hosted by Purcell Auctioneers for €1,100 ($1,300) and features a detailed military study of the geographical landscape of the west of Ireland.

The Nazi German Supreme Command of the Armed Forces produced the handbook to provide detailed information for German military forces in the event of an invasion of Ireland.

The handbook includes maps, photographs, and illustrations of Ireland's west coast from Malin Head to Mizen Head with a particular emphasis on bridges and industrial centers.

Purcell Auctioneers described the plans as documents of the "utmost rarity" even though the first 19 pages of the handbook are missing.

As a result, the unique handbook fetched more than double its estimated value of €250-€500.

The planned German invasion of Ireland - codenamed "Operation Green" - was part of a full assessment of the regions surrounding the British & Irish Isles.

The cover page of the handbook states that the plans were prepared in October 1941.

"Only for internal use! Military – Geographic Information about Ireland. West and North Coast (from Mizen Head to Malin Head). Completed on October 15, 1941. General Staff of the Army. Department for War Maps and Surveying. Berlin 1941," the cover page says.

The Nazis prepared a total of 144 Ordnance Survey maps and 1,500 photographs of Ireland in advance of a potential invasion of Ireland.

The handbook additionally included sketches and photographs of the Irish coast and proves that Hitler considered that the invasion of Ireland was worth extensive research and planning.

Historians have proposed several reasons why the Germans considered invading neutral Ireland, including the potential to draw off British troops in Northern Ireland and the potential to provide a staging post for Luftwaffe forces in subduing Northern Britain.

The Nazis may have also viewed Ireland as an opportunity to intercept American shipping or may have sought to prevent Allied forces from using Ireland as a staging post or refuge.