The men were traveling to Krakow in Poland and planned to drive to the Ukrainian border to join the civilian resistance against the Russian invasion. 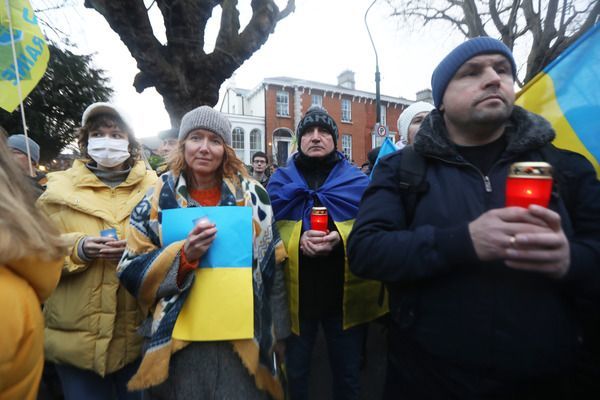 Ukraine supporters hold a candlelight vigil at the Ukrainian Embassy in Dublin on Saturday. Rolling News

At Dublin Airport on Sunday evening, a group of husbands, fathers, and sons bid farewell to their family and friends in Ireland en route to fight against Vladimir Putin's invasion of their home country, Ukraine.

The men were traveling to Krakow in Poland and planned to drive to the Ukrainian border to join the civilian resistance against the Russian invasion, responding to Ukrainian President Volodymyr Zelensky, who called on anyone who could return to Ukraine to come back and defend the country,

They have received donations of essential supplies from other members of the Ukrainian community in Ireland, including flak jackets, helmets, sleeping bags, and money.

Pavlo Serdiuk, a 23-year-old Ukrainian national living in Cork, told RTÉ News that he was returning to his home out of a sense of duty.

"I'm not going to lie. I am scared to go there. The closer you get there, the more scared you are, but it is what it is."

Another man named Stanislov, who lives in Dundalk with his family, said there were "plenty of tears in the house" after he decided to return to Ukraine.

"It is emotional, not just for today, it's emotional for the last three days when I made the decision," he told RTÉ.

Vadyn Binko, who has lived in Ireland for over 20 years, was also returning to Ukraine on Sunday evening.

"I love Ireland. My kids are Irish and my wife is here too. But Ukraine for me is my house as well,"

His wife Maryna told RTÉ she was scared to see her husband join the conflict in Ukraine but said she understands it is something he must do.

"We need to support him as a family".

As the invasion of Ukraine continues, some Ukrainians living in Ireland are travelling back to Ukraine to take up arms in defence of their country | Live updates: https://t.co/1pBTEEAjX1 pic.twitter.com/1ZRWNS7U8B

Meanwhile, an Irish man living in Ukraine told the Irish Independent that he was prepared to stay in the country and "fight for his home".

Dubliner Paul Niland has been living in Kyiv for almost 20 years and said the Russian military had underestimated the power of the Ukrainian people.

"The people of this city are not going to lie down and accept living under the barrels of Russian guns," Niland said while speaking to the Independent shortly after Russia launched the invasion last Thursday.