"A surreal air of fatigue" seems to have settled across many of the historic events that have occurred recently in the US. 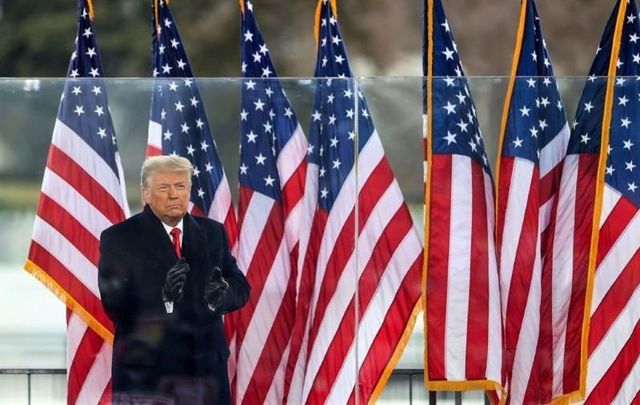 January 6, 2021: President Donald Trump at the "Stop The Steal" Rally in Washington, DC. Trump supporters gathered in the nation's capital to protest the ratification of President-elect Joe Biden's Electoral College victory over President Trump in the 2020 election. Getty Images

Events move with breakneck speed in this digital age. The constant churning of news copy can lead to a very damaging loss of perspective on what is important and what is background noise. We are swept along on a tide of competing voices and stories with little differentiation made.

Just since the beginning of 2021, we have had the rise of QAnon, the storming of the Capitol, the inauguration of a new president, and the second impeachment trial of a U.S. president, not to mention a still raging pandemic. These are all hugely significant historical events.

The problem is each crisis is overwhelmed by the next breaking story leaving a sense that everything is of equal importance and relevance.

Thus, the proper weight of history is not given to events such as the president of the United States seeking to usurp democracy and steal the 2020 presidential election. Nothing so brazen like it had ever been attempted before by any president at any time.

Yet it seemed a surreal air of fatigue seems to have settled over many of these events, as if they no longer need scrutiny.

History, however, with the benefit of hindsight, will judge this era very differently. The attempt to hijack an American election will endure as, perhaps next to the war over slavery, one of the most threatening events in our entire history.

The lack of perspective is already evident in the coverage of Trump’s second impeachment. Republican voices are urging Americans to “move on,” as if the attempt to usurp the very foundations of the state were a minor brouhaha.

It was nothing of the sort. It was a full-fledged assault on the foundations of democracy that would have forever changed the United States if it had succeeded.

That Donald Trump should face no retribution or inquiry for the insurrection is a farcical notion. He refused to accept the election results, claiming fraud despite the fact that up to 100 judges, his own attorney general, and the former Senate majority leader all agreed there was no fraud.

The role of the 45th president in fomenting the assault on democracy can and must be examined, and impeachment is the way to achieve that.

It may be an inconvenient truth, even for Democrats anxious to get to their agenda, but any refusal to examine closely what happened in the aftermath of the 2020 election would be a complete abdication of responsibility.

What is undeniable is that Trump, for months before the election, spread misinformation that the ballot would be rigged. This set the tone for the election night pantomime that he had actually won the election.

In the intervening weeks up until Joe Biden’s inauguration, Trump stoked the fires that led to mayhem. He tried to intimidate election workers and electors. He tried to bend his own vice president to his will and force him to make an unconstitutional decision on January 6.

His speech that day and the Capitol riot will go down as the most dangerous ever uttered by an American president, practically urging an attack on the symbol of democracy.

The notion of him escaping scot-free from such treasonous activities is unimaginable. The House has impeached; the Senate should convict but probably won’t.

But at least future generations will know that the matter of insurrection was taken seriously by the leaders at that time. We owe our descendants that at least in case a smarter version of Trump the rough beast shows up someday.