Irish politicians labeled the pro-Trump riots in Washington, DC that occurred as Congress attempted to ratify the 2020 US Presidential election as "shameful." 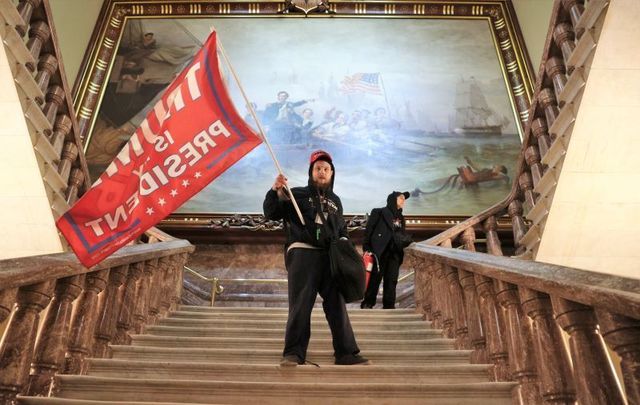 January 6, 2021: A pro-Trump rioter holds a Trump flag inside the US Capitol Building near the Senate Chamber in Washington, DC. Getty Images

Irish politicians have spoken out after pro-Trump rioters invaded the US Capitol on January 6 as a joint Congressional session convened to attempt to certify the electoral results of the 2020 US Presidential election.

Taoiseach Micheál Martin said on Wednesday that he was watching the scenes with "concern and dismay."

The Irish people have a deep connection with the United States of America, built up over many generations. I know that many, like me, will be watching the scenes unfolding in Washington DC with great concern and dismay. 🇮🇪 🇺🇸

Simon Coveney, Ireland’s Minister for Foreign Affairs, said the riots were a "deliberate assault on Democracy."

Shocking & deeply sad scenes in Washington DC - we must call this out for what it is: a deliberate assault on Democracy by a sitting President & his supporters, attempting to overturn a free & fair election! The world is watching!
We hope for restoration of calm. pic.twitter.com/1OdQYEB35K

Daniel Mulhall, Ireland's Ambassador to the US,  described Wednesday's events as "dreadful."

Like so many people all over the world, and as a great admirer of America, I have watched today’s dreadful events at the US Capitol with dismay and anxiety. I am relieved to see that Congress has now returned to the democratic task of certifying the election results.

A death now reported from the chaos in Washington DC. Shameful scenes. A direct attack on democracy and the peaceful transfer of power. #CapitolHill

Michelle O’Neill, the Deputy First Minister of Northern Ireland and the vice president of Sinn Fein, said the attacks were "shameful."

The scenes unfolding at Capitol Buildings in Washington will not stop democracy.

My thoughts are with the many friends of Ireland who work in Capitol Buildings.

Those involved in these shameful attacks will not succeed.

Hope and unity will triumph over fear and division.

Pro-Trump riots at the US Capitol

As a joint Congressional session convened on Wednesday just after 1 pm EST to certify the Electoral College votes, a typically ceremonial proceeding, pro-Trump rioters stormed the US Capitol building, forcing politicians and staffers to barricade themselves for safety.

Overlapping the Congressional proceedings was the nearby 'Save America Rally' in which President Trump again touted baseless claims of election fraud and, before encouraging the crowds to march to the Capitol, told his supporters: "We will never give up, we will never concede, it doesn’t happen. You don’t concede when there’s theft involved."

It was reported later in the day that one woman who was shot during the riots ultimately died. The woman has since been identified as Ashli Babbitt, an Air Force veteran.

The joint Congressional session ultimately reconvened at 8 pm EST. Just before 11 pm EST, Mayor Muriel Bowser said the public emergency that was declared for Washington, DC earlier in the day would be extended for a total of 15 days.

Trump gets suspended on social media

After 7 pm EST on Wednesday, Twitter announced that it had locked President Donald Trump’s account for a period of at least 12 hours, citing a violation of the platform's "Civic Integrity policy."

As a result of the unprecedented and ongoing violent situation in Washington, D.C., we have required the removal of three @realDonaldTrump Tweets that were posted earlier today for repeated and severe violations of our Civic Integrity policy. https://t.co/k6OkjNG3bM

Three of Trump’s tweets from Wednesday had been blocked from his feed and replaced with the message: "This Tweet is no longer available because it violated the Twitter Rules."

Later, Facebook also announced that it had suspended Trump's account for 24 hours, saying in a statement: "We've assessed two policy violations against President Trump's Page which will result in a 24-hour feature block, meaning he will lose the ability to post on the platform during that time."

One of the tweets blocked by Twitter was the video released just after President-elect Joe Biden delivered a live address urging Trump to go on national television and “demand an end to the siege.”

In the video, Trump, addressing the rioters, says: “I know your pain, I know you’re hurt. We have an election that was stolen from us, it was a landslide election and everyone knows it, especially the other side.

“It’s a very tough period of time. There’s never been a time like this where such a thing happened where they could take it away from all of us - from me, from you, from our country.

“This was a fraudulent election, but we can’t play into the hands of these people. We have to have peace. So go home, we love you, you’re very special.

“You see what happens, you see the way others are treated that are so bad and so evil. I know how you feel. But go home, and go home in peace.”

Calls for the 25th Amendment to be enacted

Not long after Trump shared the recorded video on Twitter, which was later removed, Representative Ilhan Omar said in a tweet that she was preparing articles of impeachment:

I am drawing up Articles of Impeachment.

Donald J. Trump should be impeached by the House of Representatives & removed from office by the United States Senate.

We can’t allow him to remain in office, it’s a matter of preserving our Republic and we need to fulfill our oath.

Elsewhere, all of the 17 Democrats on the House Judiciary Committee issued a joint letter to Vice President Mike Pence which said in part: "For the sake of our democracy, we emphatically urge you to invoke the 25th amendment and begin the process of removing President Trump from power.

"President Trump has shown time and time again that he is unwilling to protect our democracy and carry out the duties of the office."

JUST IN: Democrats on the House Judiciary Committee have called on Vice President Pence to invoke the 25th Am to remove Trump from office pic.twitter.com/o4h8Er2edv